Click Here to Remove All Ads
Source: The Guardian
The president is celebrated for seeking a vote on his latest war even as his aides make clear it has no binding effect 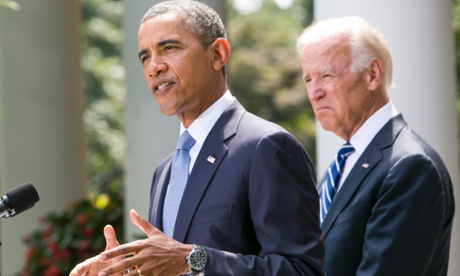 It's a potent sign of how low the American political bar is set that gratitude is expressed because a US president says he will ask Congress to vote before he starts bombing another country that is not attacking or threatening the US. That the US will not become involved in foreign wars of choice without the consent of the American people through their representatives Congress is a central mandate of the US Constitution, not some enlightened, progressive innovation of the 21st century.

George Bush, of course, sought Congressional approval for the war in Iraq (though he did so only once it was clear that Congress would grant it: I vividly remember watching then-Senate Foreign Relations Chairman Joe Biden practically begging the Bush White House to "allow" Congress to vote on the attack while promising in advance that they would approve it).

But what makes the celebratory reaction to yesterday's announcement particularly odd is that the Congressional vote which Obama said he would seek appears, in his mind, to have no binding force at all. There is no reason to believe that a Congressional rejection of the war's authorization would constrain Obama in any way, other than perhaps politically. To the contrary, there is substantial evidence for the proposition that the White House sees the vote as purely advisory, i.e., meaningless.

Recall how -- in one of most overlooked bad acts of the Obama administration -- the House of Representatives actually voted, overwhelmingly, against authorizing the US war in Libya, and yet Obama simply ignored the vote and proceeded to prosecute the war anyway (just as Clinton did when the House rejected the authorization he wanted to bomb Kosovo, though, at least there, Congress later voted to allocate funds for the bombing campaign). Why would the White House view the President's power to wage war in Libya as unconstrainable by Congress, yet view his power to wage war in Syria as dependent upon Congressional authorization?

More to the point, his aides are making clear that Obama does not view the vote as binding, as Time reports:

"To make matters more complicated, Obama's aides made clear that the President's search for affirmation from Congress would not be binding. He might still attack Syria even if Congress issues a rejection."

It's certainly preferable to have the president seek Congressional approval than not seek it before involving the US in yet another Middle East war of choice, but that's only true if the vote is deemed to be something more than an empty, symbolic ritual. To declare ahead of time that the debate the President has invited and the Congressional vote he sought are nothing more than non-binding gestures -- they will matter only if the outcome is what the President wants it to be -- is to display a fairly strong contempt for both democracy and the Constitution.

There are few things more bizarre than watching people advocate that another country be bombed even while acknowledging that it will achieve no good outcomes other than safeguarding the "credibility" of those doing the bombing. Relatedly, it's hard to imagine a more potent sign of a weak, declining empire than having one's national "credibility" depend upon periodically bombing other countries.

According to the Guardian's Spencer Ackerman, Secretary of State John Kerry, this morning on CNN, said this when asked whether the Congressional vote would be binding: "[Obama] has the right to do this no matter what Congress does."

Related Topic(s): Congress; Syria; Syrian Situation, Add Tags
Add to My Group(s)
Go To Commenting
The views expressed herein are the sole responsibility of the author and do not necessarily reflect those of this website or its editors.