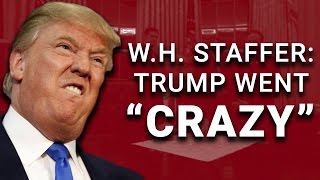 From Vanity Fair: "I HATE EVERYONE IN THE WHITE HOUSE!": TRUMP SEETHES AS ADVISERS FEAR THE PRESIDENT IS "UNRAVELING"

The best solution for Trump personally would be to resign now (citing "deep state, fake news" persecution). He would immediately be hired by NBC (yes, the one he's threatening now) in a revival of "The Apprentice." He would go on being a big media noise, investigations of his manifest criminality would stop, his "brand" would be more potent than ever. He'd play the martyr to right-wing crowds, while going on Kimmel, Colbert, even SNL to josh and joke with his fellow celebs, now treating him as a lovable rogue once again.

This is exactly what will happen if he leaves early enough, by his own choice. It's a win-win situation for him; he will probably figure this out soon enough. Meanwhile, the radical extremists in the GOP, Wall Street, Pentagon, the Koch-Mercer oligarchs, etc., will carry on their authoritarian agenda, with Trump still functioning as an effective diversion for them. People will be so glad he's gone they'll be even less inclined to see the reality of what's going on. The "Resistance," now "victorious," will go back to pushing neoliberal nostrums and centrist surrender as the radical extremists and corporate overlords rage on.

Even if Trump is too stupid to take this opportunity while he can, the scenario still might play out as above. An impeached Trump might be pardoned by Pres Pence, a la Ford and Nixon, as a way to bring "closure" to the crisis. Trump won't lay low for years like Nixon, but go off immediately to NBC (or FOX or Breitbart or even his own network) and keep making noise and fomenting strife and chaos.

What we are facing is not just the deadly, sinister antics of a clown but a vast system of oppression that has grown up around us, with bipartisan support, and now has us in a death grip. There are some hopeful counter-forces in play, but they face a far more daunting challenge than merely removing Trump -- and, as Stan Rogouski points out, with a far more deadened public, more atomized & cowed, less easy to rouse to fight for their own common good, than we saw in the 60s & 70s, and with institutional bulwarks far less powerful and much more compromised by the power system than before. There are long, hard, dark days ahead of us.

I wrote more on this systemic challenge in a Facebook post earlier this week, after Trump's tweet-threat against NBC:

It's way past time to stop treating Trump as a joke, and trying to "resist" him with talk show snark and Alec Baldwin imitations. It's time to take him very, very seriously, to not be distracted by his diversionary tactics but to look closely and carefully at what his administration is actually doing -- and at what he is actually proposing and promoting in tweets like this one. He's not a joke; he's a kleptocratic authoritarian who continues to be supported and excused and empowered by one of the main political parties, by the nation's most powerful financial center, Wall Street (whose denizens fill his cabinet), by the most powerful corporations and oligarchs (Kochs, Mercers) in the country, and by the most powerful military force and most pervasive intelligence apparatus in human history.

It's time to realize he's not just some "loose cannon" who will soon be swept away by "the grown-ups in the room." The so-called grown-ups in the room are the ones who are empowering him. He is working hard to give them everything they've ever dreamed of: unregulated corporate rapine; unlimited military spending; control of the media; control of education; unrestricted police powers to protect their wealth and power from any protest or resistance; restricting or eliminating the right to vote to all sorts of the "wrong" kind of people who might vote to advance the common good instead of elite interests; using ALEC and other far-right "legal" groups to pass laws restricting the rights of states and communities to make their own decisions and cut off the avenues of legal redress for ordinary people; constructing a new kind of society based on fearful obedience, draconian authority, elite control and the subjugation of individual citizens.

Although they may scoff at him behind his back, call him a "moron," sniffily recoil at his vulgarity, they know he's actually their Santa Claus, with a bottomless bag of goodies for them. They know his reality show schtick distracts us from what he is doing for them, makes us blind to the harsh new society rising all around us. They aren't going to get rid of him. We need to be more clear about what we're really facing. It's not just a stupid man-baby tweeting bellicose nonsense on his toilet; it's everything that he is doing and empowering -- and everyone who is empowering him.

A couple of days later, I saw this interview with Noam Chomsky, making many of the same points, with greater detail and scope. There is also much more on the foreign policy aspects. The whole thing is worth reading, but here are a few salient points:

"The claims [of Trump's tweets] themselves don't really matter. It's enough that attention is diverted from what is happening in the background. There, out of the spotlight, the most savage fringe of the Republican Party is carefully advancing policies designed to enrich their true constituency: the constituency of private power and wealth, 'the masters of mankind,' to borrow Adam Smith's phrase ... Now, while attention is focused on Trump's latest mad doings, the Ryan gang and the executive branch are ramming through legislation and orders that undermine workers' rights, cripple consumer protections and severely harm rural communities. They seek to devastate health programs, revoking the taxes that pay for them in order to further enrich their constituency, and to eviscerate the Dodd-Frank Act, which imposed some much-needed constraints on the predatory financial system that grew during the neoliberal period.

"Not all of the damage can be blamed on the con man who is nominally in charge, on his outlandish appointments, or on the congressional forces he has unleashed. Some of the most dangerous developments under Trump trace back to Obama initiatives -- initiatives passed, to be sure, under pressure from the Republican Congress."

Related Topic(s): Chaos; Crisis; Donald Trump Lies; Impeached; Scientists; Weapons, Add Tags
Add to My Group(s)
Go To Commenting
The views expressed herein are the sole responsibility of the author and do not necessarily reflect those of this website or its editors.