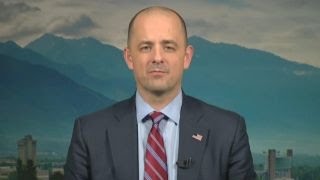 Evan McMullin is a former (presumably) CIA operative who once declared that his main job with the Agency was "to go out and convince al Qaeda operatives to instead work with us." In 2010 he left the CIA (presumably) to become an investment banker, then served as an adviser and policy director for the berserk right-wing extremists in the House of Representatives until 2016. In that year, he launched a brief campaign for president, offering himself as an "anti-Trump" Republican (and garnering just over half of one percent of the national vote). Since then, he has postured as an above-the-fray voice of reason, still opposing Trump, while continuing to support almost all of the extremist GOP agenda that Trump has empowered.

Lately, the possibility has arisen that the Democrats might nominate a presidential candidate who espouses some of the actual core beliefs of most party members and, what's more, might actually seek to implement at least some of them (unlike the Pelosi-Schumer old guard, who prefer lip service for the rubes and lube jobs for their corporate backers, greasing the wheels for their profit and power). Even the remote possibility of this happening seems to have given McMullin a fit of the vapors. A recent tweet is a case in point. On March 9, McMullin offered this broadside to a nation desperate to hear how CIA operatives want them to vote in the coming election:

Now, on the one hand, this is such an asinine statement -- baseless, fact-free, jejune, dumb -- that it almost defies comment. It's like watching a cat hock up a hairball: well, there it is. What can you say? It's a hairball; that's it. But in an idle moment of a Sunday afternoon, I was moved to lob a few tweets back to McMullin, which I've gathered into a more coherent bundle below.

"You have publicly stated that your job for the CIA was to talk to al Qaeda members and try to get them to cooperate with the US. But you would balk at making common cause with a longtime US senator if he is chosen by millions of Americans in a democratic process. I find that odd.

"You are obviously not an idiot, so you know that the policies advocated by Sanders are diametrically opposed to Trump's -- just as, say, the Socialists of prewar Germany were not identical to the Nazis. So why are you pushing this brazenly false equation? In doing so, you are partaking in precisely the same distortion of reality that is Trump's chief weapon. Again: you'll negotiate with al Qaeda killers to get them to work with the US, but you reject out of hand US politicians going through the democratic process, and make false equations about them.

"What is it about al Qaeda killers that you find more attractive than a democratic socialist whose policies are completely in line with mainstream FDR liberalism? Is it because your al Qaeda friends cooperated with the CIA, while there is a chance a Sanders' presidency MIGHT hinder, in some small way, the activities of our intelligence apparatchiks? Is that where your true loyalties are: with the institutional power of the CIA rather than the democratic processes of the country? You'd make common cause with al Qaeda, but not FDR liberalism?

"I think your dissemination of these false equations between ordinary American liberalism and Trump's proto-fascism -- not to mention your McCarthyite smears of Sanders as a Kremlin tool -- speak volumes about what you really stand for and your true vision for the country."

Of course, McMullin's 2016 admission of the CIA's intricate intertwining with al Qaeda in order to use the terrorist organization for Agency purposes is worth a great deal more attention than it has ever warranted. But we'll save that for a later time

Related Topic(s): 2016; CIA; Evan Mcmullin; Tweet, Add Tags
Add to My Group(s)
Go To Commenting
The views expressed herein are the sole responsibility of the author and do not necessarily reflect those of this website or its editors.