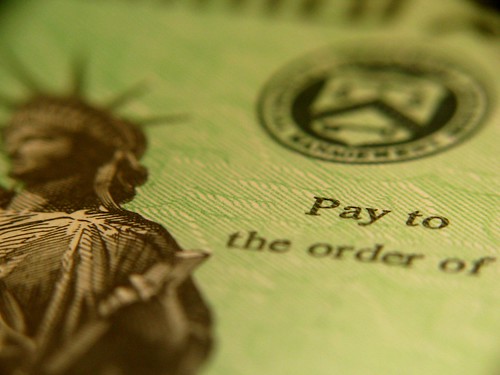 The check is in the mail?
(Image by frankieleon)   Details   DMCA

With both parties unwilling to agree on a desperately-needed 2nd stimulus package amid Great Depression-levels of economic suffering, it should be crystal clear that both Democrats and Republicans are happy to destroy the average American in their lust for power.

It's incredibly devilish, but just to achieve their short-term goal of winning the November elections both parties have proven that the ruin of Main Street is a perfectly acceptable price to paid.

Republican intransigence at least has an ideological component, albeit a terrible one: the largest pillar of neoliberal ideology is to slash the size of government at all levels - this explains why they refuse to concede to the Democrats' intelligent call for hundreds of billions in stimulus funding for state and local governments.

Yet Republicans don't seem to understand that their beloved "democracy with American characteristics" does have a flaw or two: the US is a federal system - the fundamental structure of this type of government is to empower local government and to reduce the power of the central government. Therefore, in any type of crisis the federal government is handicapped from the very start - US citizens are forced to depend on local governments. Yet a crisis like this - which saps local funding and tax revenue - makes a federal/national response the difference between life or death.

Democratic intransigence is harder to understand: why did they go months without even mouthing condemnation towards anarchic situations in places like Portland and Minneapolis, or against cases of violent looting which topples far more small-business households than corporate insurance companies? Why do they refuse President Trump's call for a stand-alone stimulus package consisting of another $1,200 check to households? Everyone reading this is aware of the general statistics: as recently as two weeks ago 42% of all US households said they have endured job losses or reductions in wages - more aid is urgently, urgently needed and has been for months.

It is irresponsible to not objectively consider the widespread claim over here: Democrats are sowing as much disorder and suffering as possible in order to oust the incumbent because, of course, how can an incumbent possibly survive this catastrophe? Democrats have history on their side (if perhaps not the popular vote): the only one-term presidents in the past 50 years - Jimmy Carter and George Bush I - were doomed by recessions far, far more minor than this one.

The answer in almost every country would be obvious: surely a third party must be turned to?

But the duopoly in the US system is so firmly entrenched that there simply is no third party. Democrats throw up huge obstacles to keep left-wing parties like Greens or socialists from even being on local ballots, while Republicans do the same for more right-leaning parties like the Libertarians. Beyond this very real collusion, which in any non-Western country would be denounced as rendering elections not at all "free and fair," a "winner take all" system means that third parties can make no incremental gains, only sweep to power in a landslide. Such a shift hasn't happened here since the collapse of the Whig Party in the 1850s.

Trump, however, was indeed something of a third-party landslide, history will prove:

Because they were so fed up with the disregard and corruption of Washington half the country elected a totally non-partisan non-politician like Trump (he has changed his party affiliation five times), mainly because of his promise to drain "the Swamp" and, thrillingly, dangling the promise of prosecuting people like "crooked Hillary" in a China-like anti-corruption drive. Unfortunately for these voters not only has Trump proven to have no coherent political ideology at all (nor the ability to acquire one over four years of daily political briefings), but he has depressingly done his very best to win the acceptance of the political establishment. Trump has "become the Republican Party" even though he was voted in to destroy it and to provide an alternative to it. The Republican Party knew that - this is why they rejected Trump's candidacy all the way until May 2016. Indeed, it's too bad that Trump handles rejection so well.

Despite his stupidities, vulgarities and baggage, in 2016 Trump was indeed the "vote for change" to half the United States. Yet due to his four-year effort to win "The Swamp's" approval, which is proof that he is not a truly "populist" politician at all, in 2020 he cannot be considered, like Barack Obama in 2008, the "hope candidate".

So who is the "hope candidate" for an already deeply cynical and embittered American populace which is now also economically-desperate and patriotically aghast?

Because Trump has actually rendered no genuine change in Washington - he has merely been absorbed by the Swamp's quicksand - there are only two choices, and both choices are the same as they were prior to the 2016 Trump phenomenon: inconsequential third parties or abstention.

A vote for third parties like Party for Socialism and Liberation, the Green Party or even the Libertarians is the only ballot an American with free will can cast and truly feel like they have not sanctioned the 2020 destruction of their own country by the entrenched elite.

Related Topic(s): Economic Stimulus, Add Tags
Add to My Group(s)
Go To Commenting
The views expressed herein are the sole responsibility of the author and do not necessarily reflect those of this website or its editors.