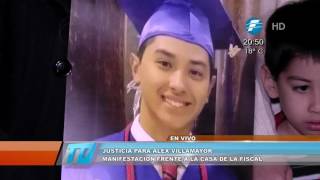 Millions of Americans travel overseas every year, whether it's across the border to the Canadian side of Niagara Falls, Cancun, or to more exotic locales. But nobody expects to die violently while abroad, and especially not a 16-year-old.

That's what happened to Alex Villamayor.

Villamayor was an American citizen living with his parents in Paraguay. As the summer wound down, he made plans to begin his freshman year of college in Maryland. But first, he accepted an invitation to spend a weekend at the family ranch of a teenage friend in Paraguay.

That weekend ended with Villamayor dead of a gunshot wound to the head.

Paraguayan authorities were quick to rule the death a suicide. But this didn't make any sense. There was no gun residue on Villamayor's hand, and the gun was placed in such a way that it would have been nearly impossible for him to have fired the shot.

Moreover, Alex was a happy kid -- an honors student -- with a supportive family. As far as the people closest to him could tell, he was going places in life and seemed excited about the future.

The Villamayor family did what every family is supposed to do in a terrible situation like this: They immediately contacted the American embassy and the FBI for assistance. They asked embassy officers there to press for a proper investigation. But the Paraguayan authorities had already botched the case.

Under intense pressure from the Villamayors, the case was reinvestigated and the cause of death was changed to homicide. But the area where Alex died wasn't sealed off. Witnesses weren't interviewed. And the classmate who'd invited Alex to the ranch fled the country and is now incarcerated.

Meanwhile, the US embassy said it would "monitor the situation." I've worked in American embassies around the world, so let me tell you what that means: it means that they don't intend to do anything.

Indeed, all the embassy did was send a diplomatic note to the Paraguayan government asking for "clarification" of the investigation.

The family then contacted their elected officials. And this is where Donald Trump ought to come in. He's made a mantra of putting "America First." Now is the time to do exactly that, even if the Villamayors' other elected representatives won't.

After Alex's aunt, Kim Luk, contacted her senators for their help, Maryland senator Ben Cardin and former senator Barbara Mikulski wrote back saying that the embassy was "working with the family" on the case, apparently not even realizing that it was the family who had contacted them in the first place.

Cardin's staff had the gall to send a follow-up letter saying that they'd "spearheaded a call to the embassy." Mikulski's office didn't even pretend to be interested in the case. She was retiring.

Related Topic(s): Alex Villamayor; Investigation; Murder; Paraguay, Add Tags
Add to My Group(s)
Go To Commenting
The views expressed herein are the sole responsibility of the author and do not necessarily reflect those of this website or its editors.