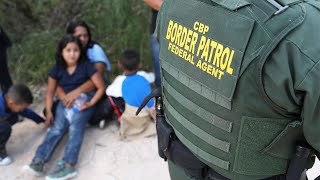 Migrant Children Crying for Parents as They Are Separated at Border
(Image by YouTube, Channel: Inside Edition)   Details   DMCA

As Thanksgiving approached, Donald Trump has sent 5,900 troops to the border with Mexico, ostensibly to protect it from a hoard of undocumented migrants, to keep out "rapists and drug dealers," and to ensure the security and safety of American citizens. That's preposterous, of course. The only thing that's going to happen is 5,900 people are going to miss Thanksgiving with their families because Donald Trump decided to use them as political pawns. Besides, Trump hasn't even mentioned the so-called immigrant caravan since the election. It was all just a political prop.

Similarly, the House Progressive Caucus met last week to lay out its legislative agenda for the coming year. The caucus has grown by 20 members, thanks to Democratic victories in the midterm elections, and many of those new members of Congress campaigned on a promise to abolish Immigration and Customs Enforcement (ICE). But when the new caucus chairman, Rep. Mark Pocan (D-Wis.) was questioned about caucus priorities, he said they were healthcare, creating jobs, and fighting corruption. Reporters pressed him on immigration and abolishing ICE, and he responded, "We are absolutely going to be pressing that. However, I think our main goal of getting out of the gate is going to be the issues that we all ran on across all districts, around healthcare, around good paying jobs, around dealing with the culture of corruption." So the caucus is not "absolutely going to be pressing that." And the progressives also used immigrants as a political prop.

The issue of immigration is an important one for me. My grandparents came to the United States from Greece in 1931 (my father's parents) and 1934 (my mother's parents) fleeing political upheaval, poverty, and foreign occupation. They had to deal with the same bigotry that other ethnic groups did when they arrived in the United States. They had to deal with the same fearmongers we see today trying to conjure up images of dark-skinned weirdos raping white women, taking jobs away from white men, and polluting the gene pool. On my grandparents' immigration forms, their race is written as "Greek," not "white."

The truth about almost all immigrants, a truth that the mainstream media generally ignores, is that they simply want a chance to flee violence and deprivation in their countries, work to earn a living for their families, and happily pay their taxes. That describes my cousin Angelo.

Angelo was a member of the Greek Merchant Marines in the late 1960s. One day his ship docked in the port of Norfolk, Virginia. To hear him tell the story, his captain said, "Angelo, I don't trust any of these other sailors to remain at their posts. I think they'll jump ship. So I want you to take guard duty tonight." Angelo stood watch until the sun went down and then he promptly jumped ship, swam to shore, and made his way to a Greek coffee shop in Richmond, Virginia. At the coffee shop, a friendly compatriot contacted my grandfather in Farrell, Pennsylvania, and told him that Angelo was in the country. My grandfather wired enough money to get Angelo onto a train and he soon arrived in Pennsylvania.

I was four years old when Angelo arrived at the house. It only took a few days for immigration officers to arrive. Even as a little kid, I remember it like it was yesterday. Angelo hid in the broom closet in the kitchen while my grandfather went to the front door. He opened it and, although he only spoke about 20 words of English, he looked the officers in the eye and said, "No warrant? You no come in."

Like I said, most immigrants just want a chance to earn a living. They're happy to pay their taxes if given the opportunity. Angelo waited things out. There was an amnesty eventually, as there often is. Angelo got his American citizenship. And for the next 30 years he operated the barber shop inside the Pentagon -- a swarthy, threatening "illegal immigrant" inside the center of world military power. He ended up buying a beautiful house in Springfield, Virginia, marrying, having a son, and living happily ever after.

That brings us back to Donald Trump's immigration policy. It's morally and ethically bankrupt. The Central American migrants who are a part of the caravan are not a threat to the US or to the American economy. We actually need them to take jobs that Americans won't take. How many people do you know who are willing to pick fruit or vegetables, clean houses, or slave away in restaurant kitchens? And at the upper end of the economy, Dr. Muhammad the neurologist is not going to take your job.

Instead of sending troops to the border, the Trump administration should do what the George W. Bush administration set out to do before the September 11 attacks killed it: Issue seasonal work visas, let everybody into the country who wants to come here, let them pay their taxes, and then let them go back home until the next season. If they respect the rules for a period of time to be determined later, they should be eligible for a permanent visa or for citizenship. It's not a difficult concept. It had broad bipartisan support in 2001. It could again. But there's no indication that Donald Trump or either political party have the guts, the desire, or the political wherewithal to give it a try.

In the meantime, the Trump administration is fighting an ACLU lawsuit that would reunite immigrant parents who have been forcibly separated from their children, an appalling policy that shocked even hardline immigration opponents. And all the while, Donald Trump employees Eastern European "temporary workers" at Mar-a-Lago and his many golf courses. It's the height of hypocrisy and does not instill optimism.

Related Topic(s): Families; Immigrants; Immigration; Rights Denied; Trump Cruelty, Add Tags
Add to My Group(s)
Go To Commenting
The views expressed herein are the sole responsibility of the author and do not necessarily reflect those of this website or its editors.