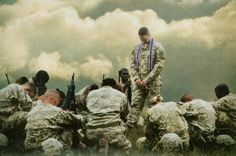 Recently, I sent this email to the Pentagon:

I understand that a meeting is scheduled for Thursday on the Hill at which there will be representatives from all the military services and some of the MOC, including Rep Doug Collins and Rep Doug Lamborn, who have raised their concerns about the DOD's recent actions to uphold the U.S. Constitution with regard to separation of church and state. I also understand that the MOC will cite the Military Religious Freedom Foundation (MRFF) as a source of their concerns with regard to those who have influenced, in their view, the DOD to uphold the U.S. Constitution.

As an advisory member of the board of the MRFF -- one who assumed the position when advisory board member and former USN SEAL Glen Doherty was killed in Benghazi in 2012 -- I have become fully conversant with the Foundation's important mission to assist in keeping the military in synch with the Constitution with regard to religion. As such, I understand how important it is for the MRFF to be present when those who would have the military act otherwise than in concert with the Constitution put forth their views in official channels.

Consequently, I respectfully request that I be permitted to attend the meeting planned for this Thursday.

Upon your approval, I request that the meeting details be sent to me by Ms Warner or her staff, to include requirements mandated by DOD and the Congress given the present COVID-19 pandemic.

I included my cell phone number so that Under Secretary Donovan's Director of Operations and official scheduler, Jill Warner, copied on my email, could pick up the phone and almost instantly respond, in the negative or affirmative. Or one of her staff could do so. Not an arduous action for them, to be sure, nor time-consuming. A terse email response would have worked too.

But I heard nothing.

In fact, through other channels I learned -- too late for corrective action -- that the meeting in question was called by and to be hosted by the members of Congress who had recently complained to the DOD; the two specific Congressmen I heard about were Doug Lamborn (R-CO) and Doug Collins (R-GA), as mentioned in my email to Undersecretary Donovan. DOD was not responsible for the meeting, just for attending.

Lawrence Wilkerson's last positions in government were as Secretary of State Colin Powell's Chief of Staff (2002-05), Associate Director of the State Department's Policy Planning staff under the directorship of Ambassador Richard N. Haass, and (more...)

Related Topic(s): Christianity; Meeting; Military, Add Tags
Add to My Group(s)
Go To Commenting
The views expressed herein are the sole responsibility of the author and do not necessarily reflect those of this website or its editors.

The Ultimate Case For Trump's Impeachment And Removal From Office

Militarized Christianity: The Meeting That Never Was (For Me, Anyway)