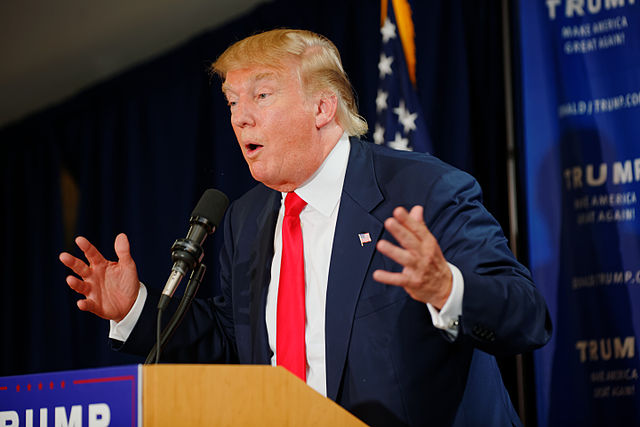 With regard to President Trump's ill-thought-out plan to host the upcoming G7 meeting at one of his own properties in Doral, FL, Republican Tom Cole exclaimed on Monday: "I think there was a lot of concern. I'm not sure people questioned the legality of it, but it clearly was an unforced political error." And according to The New York Times, saintly fair and balanced "Fox News personalities expressed disapproval" too.

So, we are into almost three years of dozens upon dozens of "unforced political errors," some of them quite clearly illegal or unconstitutional, and Congressman Cole, bless his little Oklahoma heart, is just now exclaiming about this particular one. You just can't beat this GOP-Mafia party lash-up. And that lash-up's mouthpiece, the personalities at Fox News, collectively or even individually expressing some dismay, tops the journalistic cake.

And if acting White House chief of staff Nick Mulvaney actually believes that Trump was "honestly surprised at the level of pushback" to his proposed G7 locale, as the Times reported, then the nation and the President need a new acting chief of staff.

This is now well beyond Orwell, beyond Kafka, beyond even Marvel Comic Books. The degree to which U.S. governance has been savaged is simply breathtaking. Forget "the Deep State," the oligarchs, the plutocrats, the messianic humanitarians, the "corporations that are now people," or the usual abuse of presidential power resulting in wars or potential wars from one end of the globe to the other. We have a situation today well beyond anything any one of them could generate -- because at the end of the day their power is motivated by self-interest and such interest, no matter how selfish and greedy, normally does not seek to destroy the very things it's robbing, abusing, or otherwise savaging.

Trump and his team, from Mulvaney to Secretary of State Mike Pompeo, are utterly unique: stark-raving incompetents in harness for America. From the Doral proposal to the Christian State Department, Christian Veterans Affairs Department, and Christian DOD; from kiss-and-tell diplomacy with bloody-minded dictators to absurd protestations attributing their own lies and crimes to others with a diligence-to-detail unparalleled -- this gang is for the record books. And the outcome they are generating just might be as well; that is, for the closing of the record books. Because sooner rather than later, the lights are going out on this Reality TV show. Such darkness that follows might enshroud America for years to come.

And the idea that Trump is opposed to war -- which would be an absolutely marvelous development if it were true -- is belied almost daily, with the latest being his statement this week: "I'm trying to get out of wars. But we may have to get in wars, too. OK? We may have to get in wars. ... We're better prepared than we've ever been. If Iran does something, they'll be hit like they've never been hit before. I mean, we have things that we're looking at."

And we must assume Trump would start a war with Iran without Congressional authorization because one of Trump's most egregious unconstitutional actions so far has been with respect to U.S. support for the war in Yemen, support that President Obama commenced unconstitutionally in 2015.

We don't have to examine Trump's violation of a UN- and U.S.-approved nuclear agreement with Iran, or his hundreds of lies, or his egregious revelations of state secrets, or his savaging of people whom he chose to work for him, after their dismissal or resignation, or his constant attempts to enrich himself and his family. We can simply examine his continued authorization -- now against the will of a majority of Congress -- of this totally unconstitutional act.

Both Houses of the U.S. Congress passed legislation to end U.S. support for the brutal war in Yemen that our erstwhile ally, Saudi Arabia, is badly losing. This was not normal legislation. Indeed, it was the first invocation of the War Powers Act (WPA), the legislation Congress passed in order to prevent another Vietnam. It passed in 1973 over Richard Nixon's veto.

But sadly, the collective cowardice of the Congress was largely unaffected; so, the 2018 legislation on the Yemen War was the very first use of the WPA since its passage, thus the first time since the Vietnam War that Congress asserted its very clear and virtually exclusive power over war.

In short, calling on the War Powers Act -- and on the Constitution upon which that Act is based -- a majority of the Congress directed the President to cease U.S. support for that war.

President Trump vetoed that constitutional act of Congress. On almost any other legislation that I can think of, Trump would be in the right and acting constitutionally. But not for the power of war; that power is, except for imminent attack, exclusively the prerogative of the Congress. The Congress spoke with regard to the Yemen War. Trump cannot veto that lawful voice.

You don't have to be a lawyer to see the simple logic of this situation. In fact, lawyers are superfluous when it comes to the war power. They should not even get a vote, let alone parse the law to favor the Executive Branch of government, like they have been doing increasingly since 2000.

Lawrence Wilkerson's last positions in government were as Secretary of State Colin Powell's Chief of Staff (2002-05), Associate Director of the State Department's Policy Planning staff under the directorship of Ambassador Richard N. Haass, and (more...)

Related Topic(s): Removal From Office; Self-interest; Trump Impeachment; Trump Insults; Trump Warmonger; Unconstitutional, Add Tags
Add to My Group(s)
Go To Commenting
The views expressed herein are the sole responsibility of the author and do not necessarily reflect those of this website or its editors.

The Ultimate Case For Trump's Impeachment And Removal From Office

Militarized Christianity: The Meeting That Never Was (For Me, Anyway)