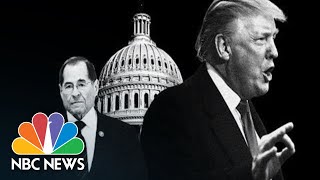 Poised to pass two articles of impeachment in the full House this week, Democrats have remained extraordinarily united throughout the process while nearly half the country stands in favor of taking the drastic action of removing Donald Trump from office. Yet press coverage in recent days has suggested (surprise!) that Democrats are in a state of disarray, a favorite fallback position for much of the Beltway media, where Democrats are constantly portrayed as scrambling and being outsmarted by Trump and the GOP. In the process of focusing on Democrats and the alleged struggles impeachment presents, news outlets continue to eliminate Republicans from the entire process. The GOP, apparently, faces no impeachment fallout, only Democrats.

Stressing "the quiet hand-wringing" that now consumes Democrats, The Washington Post last week insisted the party was bracing for Democratic defections when the articles of impeachment are soon voted on by the full House. Democrats are bracing? Really? From a political perspective, I'd suggest that if 10 or 20% of the Democratic caucus in the House balked on impeachment and voted no, that would represent a stinging defeat for party leadership. Ten or 20% of the 233-member caucus today would mean 20-40 Democratic no's. But how many Democrats are poised to vote no on Trump impeachment? According to the Post, possibly six members will vote no, or roughly 3% of the Democratic caucus. Sorry, but that just doesn't qualify as big news.

Related Topic(s): Democracy In Action; Democrats; Impeachment; Media Bias; Media Hypocrisy; Trump, Add Tags
Add to My Group(s)
Go To Commenting
The views expressed herein are the sole responsibility of the author and do not necessarily reflect those of this website or its editors.