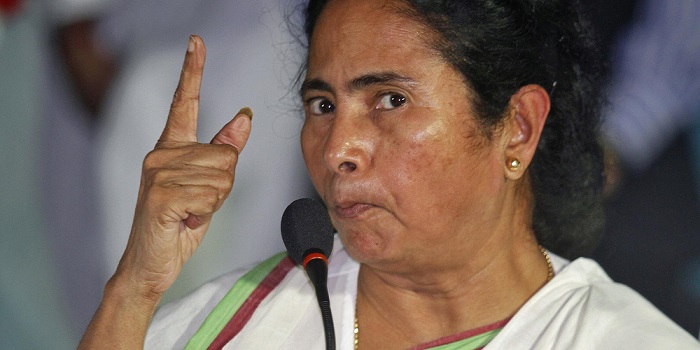 Mamata Banerjee has an interview in Indian Express today. I left everything and went for it. I mean there is such a dire need for the rest of the country to know about the intimidating TMC leader. I often think if I could write as freely if I was in Bengal of today. She has disdain for Centre; resistance to Supreme Court or Election Commission; contempt for institutions such as CBI; indifference to blood on the streets and incarceration for any individual who goes public with anything not to her liking. I mean do you remember how she stopped her vehicle, got out and confronted the crowd who were chanting "Jai Shri Ram"? We have not even come to Priyanka Sharma put in 14-day custody for sharing a photo-shopped image.

Frankly, I was extremely disturbed when CBI officials were held "hostage" in a police station for descending on Kolkata police commissioner Rajiv Kumar's residence. That central forces were brought out to ensure the families of CBI officials were not put to harm. That Mamata Banerjee was physically present as the sordid drama rolled out. She then sitting on a dharna, serving bureaucrats and police officials taking their seats alongside her, in complete violation of service rules. Supreme Court later finding the allegations against Kolkata police chief as "very, very serious."

There was dismay when Durga idols were vandalized in Hooghly; that despite High Court ruling, she restricted Durga visarjan on Muharram day; that threat of Islamic jihadists is so real that Islamic State (IS) has announced it has an "emir" in West Bengal. And should we also talk about the alleged scams which probably is genesis for her angst against Modi and BJP?

When the issue of India's unity is at stake; whether Bengal could break away one day, whether it could harbour terrorists who would unleash their fury on the rest of the mainland aren't these grave enough questions on Indians' mind? That EC was compelled to spread elections in Bengal to all seven phases; remove a few police officers from election duties; send an observer and finally asked central armed forces to be present in almost the entire Bengal which still hasn't been able to stop violence and killings, doesn't it tell you of a state sitting on a time-bomb? That even media is facing the brunt of violence?

But what do we get in the Indian Express interview? How you walk so much? How you eat so little? How she would take up the role of a Prime Minister after the elections (not once but thrice in the interview)? The interview began promisingly enough with questions on Muslim appeasement. But Mamata never replied to it and the question was never pressed again. When political violence is mentioned, Mamata says scattered incidents and the interviewer lets it pass. All we get is how Hindu she is in her beliefs (sic). None of the questions I have mentioned above were even remotely thrown at her. Is this how you define "Journalism of Courage?"

Only if our media wasn't pliant enough, if it had trained its lens on Mamata Banerjee and the complete anarchy in the state of West Bengal, things wouldn't have come to this pass. Even as I write this piece, the news has come that BJP president Amit Shah has been denied permission to hold his rally in Jadavpur. State administration has also denied Shah from landing his helicopter in the constituency. Nine remaining constituencies go to poll on Sunday. How do you think Supreme Court or Election Commission is reacting to this "murder of democracy?"

Why do you think our media and edit-writers are not even pointing fingers at Mamata Banerjee on all the issues they profess to champion about? What do we make out of Shekhar Gupta ("She is meeting fire with fire") and Rajdeep Sardesai ("What's the secret of your energy?"), the chasm between their stature and their ethics? Is the media afraid of "Didi" (the very word which affection and respect now has acquired a completely sinister meaning)? And if yes, why? What do we attribute this to? Fear, greed, hatred for Modi or all of it? And who speaks for an individual who dissents?

Related Topic(s): Appeasement; Election; Jihadists; Journalism; Killing; Whatsapp, Add Tags
Add to My Group(s)
Go To Commenting
The views expressed herein are the sole responsibility of the author and do not necessarily reflect those of this website or its editors.