GUARDIAN, ATLANTIC CONTRIBUTOR ACTS AS A SYRIAN TERRORIST MOUTHPIECE ON TWITTER, AND IF YOU DON'T LIKE IT YOU'RE A RUSSIAN STOOGE 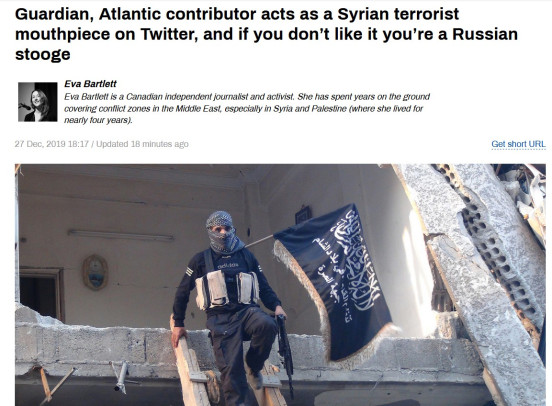 Giving a sympathetic platform to a terrorist is reprehensible at best, downright criminal at worst, and definitely a bad look for a 'respected' media contributor. Oh, it's for bashing Assad and the Russians? Go ahead, then.

A funny thing happened recently on Twitter. A journalist who contributes to the Guardian, Foreign Policy and the Atlantic tweeted-in a long thread peppered with photos of Abu Mohammed al-Jolani, the leader of an Al-Qaeda branch in Syria-about "the force that dominates" Idlib. 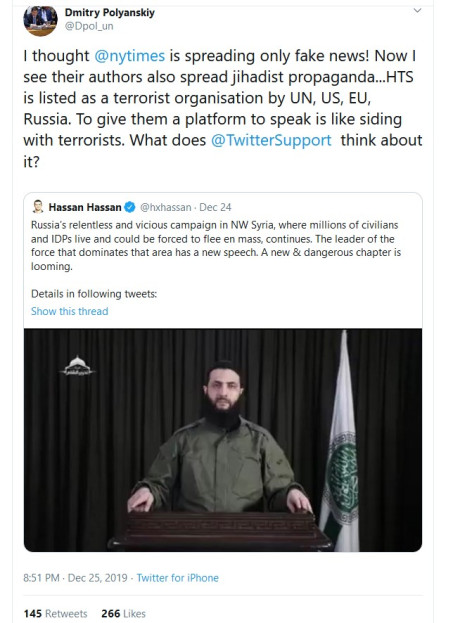 And no, its not just us Russian bots who say that Idlib is infested with Al-Qaeda: former US special envoy, Brett McGurk, deemed Idlib "the largest Al-Qaeda safe haven since 9/11."

The thread smacked of giving a platform to terrorist propaganda. After extensively quoting Jolani, Hassan weighed in with his own thoughts on the situation in Syria and his Al-Qaeda "rebels". 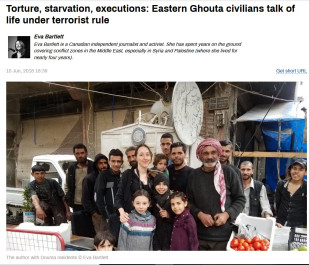 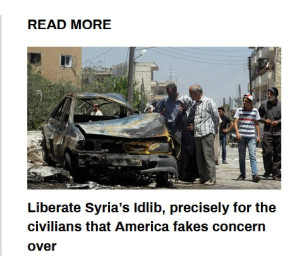 Aside from whitewashing designated terrorists, the point of his thread was clearly a continuation of the anti-Russia hysteria corporate journalists are so rabidly devoted to.

These latest anti-Russia, anti-Syria headlines and tweets echo those which abounded when eastern Ghouta and Aleppo were being liberated from terrorists. Go to Aleppo now and you'll find a city that just celebrated Christmas and is rebuilding, and indeed rebuilding all over Syria, in areas once occupied by terrorists.

More importantly, liberated areas are no longer ruled by fanatics who imprison, torture, starve and assassinate civilians. Syrian women I interviewed earlier this year in Sinjar, Idlib, spoke of being tormented by terrorists in Idlib, and called for the Syrian army to liberate all of Idlib. 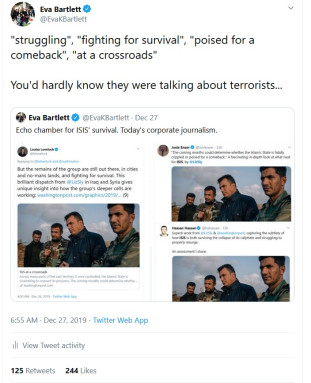 But war propagandists don't care about those civilians"

The same corporate media vultures who bandy about self-righteously furious expressions for all things Russian and Syrian are normalizing terrorists in Syria, rendering ISIS into mere "militants", "fighting for survival", as was the case in a recent Washington Post ode to ISIS. 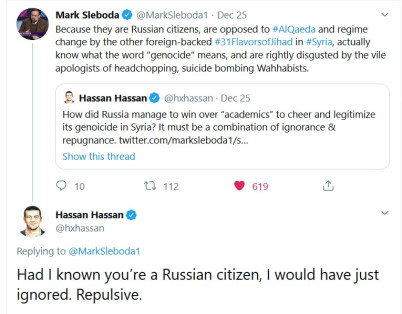 Of course, when many on Twitter pointed out his xenophobia, he scrambled to reword. 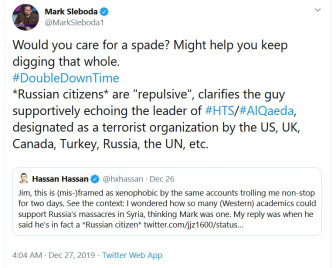 So the US and allies invaded Iraq under the pretext of fighting Al-Qaeda, largely destroyed that country, killed untold numbers of Iraqi civilians, maimed untold numbers more" and now the same designated terror group, Al-Qaeda, is suddenly a fuzzy li'l militant?

Likewise, a recent Bloomberg article describes the bandits ruling in Libya (with its slave markets - thanks, American humanitarian intervention!) as an "internationally recognized" government, and the terrorists heading there to create more chaos as Syrian "rebels".

Unsurprisingly, when war propagandists get called out by thinking people, they deflect blame onto Russia. A perusal of replies to Hassan's tweets reveals many (non-Russian) people object to war propaganda and the platforms that propagate it.

Hassan gets a sticker for his efforts to do best in the Russophobia challenge. He went beyond merely hurling the same old unoriginal accusations at Russia, and denigrated the entire nation as "repulsive". Classy. 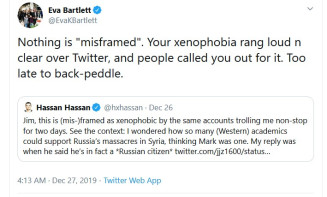 But that's the thing about Twitter: no edits. The vitriol is out there, there's no undoing the racism.

Blatant war propagandists like him have, for years, acted as cheerleaders and whitewashed the civilian-murdering terrorists in Syria, slandered those of us who challenge war propaganda and bother to give platforms to civilians instead of terrorists, and relentlessly hounded Russian diplomats and media.

And it is not Russia who financed, backed, and whitewashed terrorism: that honour goes to the US and its allies.

Increasingly, people on Twitter are calling the war orchestrators and their propagandists out. Of course,they must all just be Russian trolls, da? 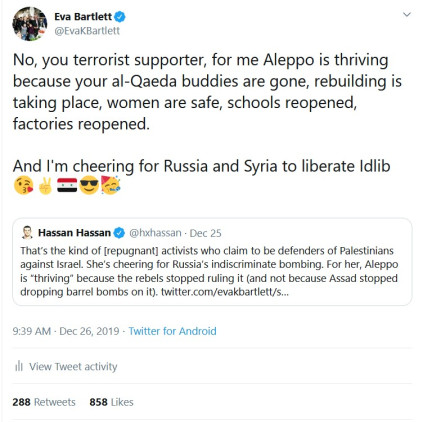