Click Here to Remove All Ads
by Greg Palast for Truthout Tuesday, 25. June 2013 Copyrighted Image? DMCA
They might as well have burned a cross on Dr. King's grave.  The Jim Crow majority on the Supreme Court just took away the vote of millions of Hispanic and African--American voters by wiping away Section 4 of the Voting Rights Act of 1965.


I'm so angry, so distraught by this, that I've asked my foundation to release my film, Election Files, for free.  This is a no-BS, no charge download of my series of investigative reports for BBC Television and Rolling Stone.
Furthermore, I'm directing the Palast Investigative Team to drop all other work for a "round-the-clock investigation of the Theft of 2014 and 2016 elections that the Supreme Court's ruling sets in motion.  Help us, join us.

When I say "millions" of voters of color will lose their ballots, I'm not kidding.  Let's add it up.
Last year, the GOP Secretary of State of Florida Ken Detzner tried to purge 180,000 Americans, mostly Hispanic Democrats, from the voter rolls.  He was attempting to break Katherine Harris' record.

Detzner claimed that all these Brown folk were illegal "aliens."

But Section 4 of the Voting Rights Act requires that 16 states with a bad history of blocking Black and Brown voters must "pre-clear" with the US Justice Department any messing around with voter rolls or voting rules.  And so Section 4 stopped Detzner from the racist Brown-out.

I'll admit there were illegal aliens on Florida's voter rolls -- two of them.  Let me repeat that:  TWO aliens -- One a US Marine serving in Iraq (not yet a citizen); the other an Austrian who registered as a Republican.

We can go from state to state in Dixie and see variations of the Florida purge game. It quickly adds up to millions of voters at risk.

Yet the 5-to-4 Court majority ruled, against all evidence, that, "Blatantly discriminatory evasions [of minority voting rights] are rare."   Since there are no more racially bent voting games, the right-wing Robed Ones conclude there's no more reason for "pre-clearance."

Whom do they think they're fooling?  The Court itself, just last week, ruled that Arizona's law requiring the showing of citizenship papers was an unconstitutional attack on Hispanic voters.  Well, Arizona's a Section 4 state.

You'll love this line from the Ku Klux Kourt majority.  They wrote that the "coverage" of Section 4 applies to states where racially bent voting systems are now "eradicated practices." 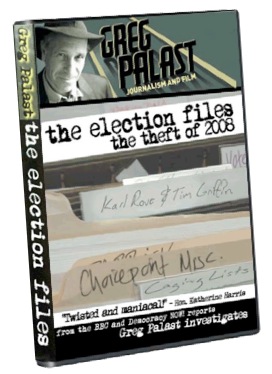 (Image by Unknown Owner)   Details   DMCA
"Eradicated?" I assume they didn't see the lines of Black folk in Florida last November.  That was the result of the deliberate reducing of the number of polling places and early voting hours in minority areas.  Indeed, if the Justice Department, wielding Section 4, hadn't blocked Florida from half its ballot-box trickery, Obama would have lost that state's electoral votes.
And that's really what's going on here:  The problem is not that the Court majority is racist.  They're worse:  they're Republicans.

We've had Republicans, like the great Earl Warren, who put on the robes and take off their party buttons.

But this crew, beginning with Bush v. Gore, is viciously partisan.  They note that, "minority candidates hold office at unprecedented levels."  And the Republican Supremes mean to put an end to that. See "Obama" and "Florida" above.

And when they say "minority" they mean "Democrat."

Because that's the difference between 1965 and today.  When the law was first enacted, based on the personal pleas of Martin Luther King, African-Americans were blocked by politicians who did not like the color of their skin.

But today, it's the color of the ballot of minorities -- overwhelmingly Democratic Blue--which is the issue.

Pre-clearance goes WAY north of the Confederacy to Alaska where Alaska's Natives are often frozen out of the voting system--and West to California.

In the Golden State, an astonishing 40% of voter registration forms were rejected by the Republican Secretary of State on cockamamie clerical grounds.  When civil rights attorney Robert F. Kennedy and I investigated, we learned that the reject pile was overwhelmingly Chicano and Asian--and overwhelmingly Democratic.

How? Jim Crown ain't gone, he's moved into cyberspace.  The new trick is lynching by laptop:  removing voters, as was done in Florida and Arizona (and a dozen other states), by using poisoned databases to pick out "illegal" and "felon" and "inactive" voters--who all happen to be of the Hispanic or African-American persuasion.  The GOP, for all the tears of its consultants, knows it can't rock these votes, so they block these votes.

Despite the racial stench of today's viciously anti-democratic ruling, the GOP majority knew they were "handicapping" the next Presidential run by a good six million votes.  (That's the calculation that RFK and I can up with for the racially-bent vote loss in 2004--and the GOP will pick up at least that in the next run.)

And the Court knew full well that their ruling today was the same as stuffing several hundred thousand GOP Red votes into the ballot boxes for the 2014 Congressional races.

The Republican court knows that to swipe 2016, they had to replace the Voting Rights Act with a revival of the Katherine Harris act.


It was investigative reporter Greg Palast, for The Guardian and BBC Television who uncovered Katherine Harris purge of Black voters in 2000.  He is also the author of the recent New York Times bestseller, Billionaires & Ballot Bandits:  How to Steal and Election in 9 Easy Steps.
Palast's film The Election Files is now available as a FREE download. Or simply support our work by making a No Gift donation.
We are counting on you to voluntarily make a tax-deductible donation and keep our investigations alive--and boy, do we need it! So many evils, so little time--and so few resources. And thank you for keeping us alive for a decade of investigative scoops.

Greg Palast's investigative reports appear in Rolling Stone, the Guardian and on BBC Television. His latest film, The Best Democracy Money Can Buy, on how Donald Trump stole the 2016 election, is available on Amazon. Palast is Patron of the Trinity (more...)
Related Topic(s): Katherine Harris; Voting; Voting Integrity; Voting Laws Federal HAVA; Voting Laws State; Voting Reform; Voting Rights; Voting Rights Act; Voting Rights Act, Add Tags
Add to My Group(s)
Go To Commenting
The views expressed herein are the sole responsibility of the author and do not necessarily reflect those of this website or its editors.