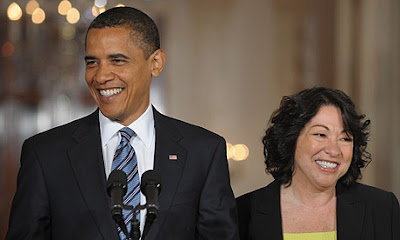 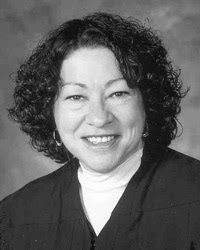 (Image by Unknown Owner)   Details   DMCA
"I chose to be a lawyer and ultimately a judge because I find endless challenge in the complexities of the law. I firmly believe in the rule of law as the foundation for all of our basic rights."


The latest talking point on both sides of the aisle is that she came from nothing. That's not true. Nobody comes from nothing. Every human being on earth, whether they are born in a mansion or a ghetto, is priceless. Still, it's a good thing to know that in an age when America is starting to look more and more like a Plutocracy, that a person of Judge Sotomayor's humble origin can climb to the pinnacle of her profession without turning her back on from whence she came. It's quite curious; why does Clarence Thomas and Alberto Gozalez immediately come to mind?
Her biography is beyond impressive. Born in the Bronx fifty-five years ago this June 23, to Puerto Rican parents, she was raised in a housing project that was rife with vice and violence. A year after she was diagnosed with diabetes at the tender age of eight, her father died. Her mother insisted that she and her younger brother receive a private Catholic education - an expensive proposition under any circumstances. Back then (as now) Parochial schools were far superior to the public schools in most American cities. A few years after graduating from Cardinal Spellman High School, she received her A.B. from Princeton University.

According to some scholars, she has more judicial and legal experience than any proposed nominee in at least a century. You would assume that a person with her credentials would be easily confirmed by the Senate, wouldn't you? In fact as things now stand, that just may happen. While the Republicans are just itching to block her nomination with every possible legislative trick at their disposal, they have a bit of a problem: their hunting dog is dead.

The "party of Lincoln" has a really big dilemma on their hands. What we're talking about here is a classic Catch 22, damned if they do and damned if they don't scenario: It would be crazy on their part to obstruct the Sotomayor nomination for the simple reason that it would only further alienate the country's fastest growing demographic, Hispanics. A lot of them (for reasons I can't figure out for the life of me) vote against their best interests by habitually siding with the GOP. To throw a monkey wrench into this process is not likely to do the Republicans any good. You would think at least one of them would be smart enough to figure this out. The membership in that silly excuse of a party is dwindling at such an alarming rate, to do anything but grant the good judge a prompt and speedy confirmation would be foolhardy.

Every day in every way, they spiral further and further into the abyss of irrelevancy. To do anything as politically suicidal as attempting to sabotage President Obama's nominee would only be further proof (as if any more were needed) that our Republican representatives, within congress and without, are beyond psychotherapy and need to be seriously medicated for their own safety and ours.

The other day on television, Mitch McConnell (What would I do without you, Mitch?) was saying that the last thing the American people needed was a Supreme Court Justice setting judicial precedent via any preconceived political conviction. It's a good argument, one that begs the following question: Has it occurred to Senator McConnell that there are already four Right Wing extremists on that court? It's time to take a very slight turn towards the left. In fact it's long overdue. And while Judge Sotomayor's record does lean toward a liberal point-of-view, she can hardly be described as a fire-breathing Lefty. Remember it was George H. W. Bush who on November 27, 1991 nominated her to hold a seat on the U.S District Court. What does that tell you?

Don't fall for the onslaught of propaganda that is about to be hurled at you that will portray her as some kind of extremist. Sonia Sotomayer is, at best, a wishy washy moderate. In fact, she's boring. Radical Lefty? Please.

Truth be told, Eleanor Holmes Norton would have been my first choice. Between you and me, I think that gal is the bee's knees! I'm just crazy about her!

As of this hour, college drop-out Karl Rove is questioning Judge Sotomayor's intellect (She graduated second in her class at Princeton). Rush Limbaugh is calling her a "racist" (The same Rush Limbaugh who a few months ago broadcast the song parody, "Barack, The Magic Negro"). The Right Wing talking heads are now trying to portray her as the instrument of Satan's own wrath. They are in the process of obliterating whatever credibility they have left. And isn't it wonderful? You and I are going to have a front-row seat for their self-immolation!

Three years ago next week when I started my blog (June 6, 2006) I made what at the time seemed a very bold, even preposterous prediction. It's not as bold or preposterous now as it once was. In fact it's almost a foregone conclusion. Please allow me to make that prediction again:

George W. Bush will be the last Republican president. There will never be another. The grand old party is over.

I concluded that first posing three years ago this Tuesday with these words:

Tom Degan is a former Green Party candidate for New York State Senate. He writes on a blogsite called, The Rant by Tom Degan. He is the recipient of the Presidential Medal of Freedom.....Okay, he didn't really receive the Presidential Medal of (more...)
Related Topic(s): Catholic; Congress; Congress; Daylight-Savings-Time; Hispanic; Ideology Moderate; Judge Brinkema; Judgeships; Law; Other; (more...) Parody; People; People; Propaganda; Republican; Sonia Sotomayor; Sotomayor, Add Tags  (less...)
Add to My Group(s)
Go To Commenting
The views expressed herein are the sole responsibility of the author and do not necessarily reflect those of this website or its editors.