[This is a follow-up to my 2003 article in defense of Rabindranath Tagore's Jana Gana Mana Adhinayaka as an homage to his Motherland (Tagore and Jana Gana Mana, Countercurrents- Click Here. For a more extended discussion, see click here). This is Part II of the same, beginning with my translation of this phenomenal poem in its entirety. Also, for one and all, here is a most soulful rendition of JGM from the usually unfamiliar Stanza 2 onwards by a gathering of some of (currently) Bengal's most accomplished musicians, headlined by Kabir Suman (erstwhile Suman Chatterjee)- Click Here Monish R Chatterjee. ] 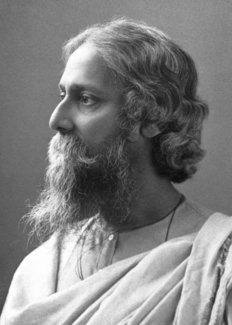 Declines and resurrections strewn across perilous pathways Even as tangled travelers rush across the ages- O Eternal Commander, night and day the trails resound With the reassuring rumble of your chariot-wheels. In the midst of the greatest turmoil, has arisen the celestial Siren of your victory-conch, O Deliverer from peril and fear. Eternal guide of the people through time, Hail to Thee Sovereign of Bharata's Destiny! Hail to Thee! Hail to Thee! Hail to Thee!

Comatose, sunken in the deepest impenetrable darkness, supine Lay Bharata; through the gravest times your tender gaze Remained awake and vigilant, safeguarding this blessed land. Through our worst nightmares and spells of terror, you offered Safety and refuge in your lap, O infinitely loving Mother! Rescuer from every suffering of the people, Hail to Thee Sovereign of Bharata's Destiny! Hail to Thee! Hail to Thee! Hail to Thee!

Commentary: More than 15 years ago, I wrote an article in defense of Rabindranath Tagore (RNT) and the context of his having written the heart-stirring homage, Jana Gana Mana Adhinayaka Jaya He (JGM) to his Motherland, long before it was ever considered the National Anthem of independent India (Tagore had left the mortal world in 1941, 6 years before the terribly fractured independence arrived at India's door.) At least a decade prior to that, I had been approached by an older friend and mentor asking that I examine the history of JGM and put together a spirited defense of a lasting work (out of an uncountable number of priceless literary and philosophical gems he has left behind for all of humanity) by Tagore, pitted against needless slurs, almost always stemming from ignorance and poor judgment.That essay (written in 2000; published at Countercurrents.org in 2003) has since generated much conversation across the Net, and in perusing these, which include many that are positive and regenerative, sometimes used to further bolster the noble work by Tagore in adoration of Bharat Mata (whom he labels Bharata Bhagya Vidhata), and yet others that continue the dishonorable smearing of a work by one of humanity's greatest representatives across all time (I maintain time and again, that millennia from now, if humanity has not wiped itself out, Tagore's name will persist as one of the greatest emblems of the very highest in human evolution, and his presence into the farthest past and the unrealized future with equal visionary outreach at all levels of creativity, will resound well past the immediacy of many (often deserving) temporal heroes).

In these 15 years, I have learned a great deal more about JGM, and have often felt impelled to add to my defense of JGM and Tagore. And now, as India's stridently fundamentalist government and it intolerant minions are set on the path to undoing India's glorious traditions of tolerance and inclusiveness, I am hearing fresh new rumblings, now bolstered further by sectarian, hate-based, bigoted political figures, regarding JGM and even a move towards its replacement.

India (and Bengal) should be rightly proud that we can call RNT one of our own, and he wanted nothing more than that (I could go indefinitely on this topic alone). Stacked against national anthems of many a nation, I think India's, by the beneficent, visionary mind of RNT, stands tall, proud and supremely uplifting. However, I feel the time has arrived for me to take up the defense once again, now more than ever. I would fervently hope that Indians, whose collective judgment I have always admired, will stand with me in defense of JGM and against any slanderous effort to replace this national treasure for purely sectarian reasons.

Several decades ago, when I would not have imagined that JGM could even be a subject of controversy, I recall listening to more than one musician (in formal or informal settings), often non-Bengali, sing JGM in its fuller version with utmost devotion. I had then not imagined that it may one day become crucial that this complete version be brought before my countrymen so they would see Tagore's creation in its fullness, and thereby abolish the slanderous association with the King of England. Hence, I have decided to present here a complete and full translation of JGM in its entirety, hoping that it will lay the matter to rest once and for all. Below are some of my interpretive comments relative to each stanza past the very first, which forms the National Anthem. It should become clear that Tagore's sight is upon the sweep of India's history, her triumphs and losses, her rise and fall, and how her "Compassionate Mother' has guided and protected her through the ages.

Stanza 2: This stanza is a paean to India's timeless dedication to Diversity as a civilizational code- perhaps even to this day unique in the entire world. Tagore cites not only the practitioners of several religions, but also the assimilation of East and West (a view and campaign towards Universalism which became central to his life and work) in this magical land which has survived so much onslaught of divisiveness through its history. Looking back, this would actually give us the assurance that Bharata will surely survive and outlive the current onslaught of narrow domestic walls (Tagore's words) and bigoted hate-mongering.

Stanza 3 In recalling Bharata's great declines and resurrections, Tagore no doubt remembers the various mythological and real wars in her history, from those of the Mahabharata and Ramayana, to perhaps those with the Greeks and multitudes of invaders down the centuries. The reference to the chariot wheels of the Commander is no doubt an echo of the immortal image of the greatest Sarathi (charioteer) of all--Krishna on the battlefield of Kurukshetra. Note also the reference to the divine conch during Bharata's battles--another reference to Krishna's conch shell--the Panchajanya ("that intended for the Five"). As the poem establishes without ambiguity, the Charioteer and Commander in this homage is the Divine Mother of Bharata to whom he offers his salutations.

Stanza 4 Within the history of Bharata, we find innumerable times of great catastrophes--mahamaris (lethal epidemics), manwantvaras/famines and natural calamities. Tagore offers worship to the Motherland (Tagore addresses her as Snehamayi Mata--compassionate Mother, Desh Janani, Bharat Mata, Desh Matrika--there is simply no room here for remotely invoking an imperial ruler for his tribute) by recalling how the blessed Motherland offered solace and refuge to all her children in her verdant lap, in her reassuring sanctuary of comfort in times of great suffering and turmoil.

Stanza 5In the final stanza, Tagore proffers a time of the reawakening of a great civilization into the new age--characterized by the end of Bharata's stupor, energized by sweet birdsongs and gentle breezes. He compares Bharat Mata's compassion as the warm radiance of the Sun at dawn, which awakens a long-supine land, long suffering under colonial oppression.

All Indians must feel solidarity with Tagore's message and his moving words of homage to their Motherland--much as they historically have in response to Bankim Chandra Chatterjee's Vande Mataram (which became the rallying call to action during India's last major struggle against colonial occupation). Tagore's vision is even more secular and non-denominational in spirit, yet he most ingeniously sculpts the first stanza into a stylized near-Sanskrit form thst the entire nation may identify with, as Bankim had done long before him. I can think of no other work, by a more worthy son of Bharat Mata, than this phenomenal homage.

STAY IN THE KNOW
If you've enjoyed this, sign up for our daily or weekly newsletter to get lots of great progressive content.
Series: "Tagore's worldview poems"