The Baritone of Our Renaissance:

Part I: The Life-Changing Rabindra-Sangeet He Revealed to Me 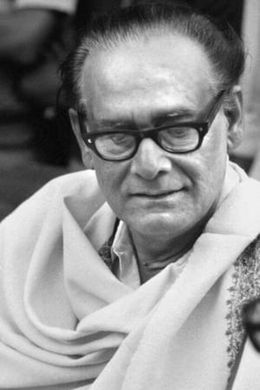 I was born in a post-renaissance, post-independence Bengal, in the city of Kolkata (erstwhile Calcutta from colonial times), at a time when the Bengal Renaissance, which began with Raja Rammohun Roy (1774-1833) and many would argue reached its zenith with Rabindranath Tagore (1861-1941), was beginning its gradual descent into mediocrity (in no small measure due to the deep wounds of partition and the associated displacements and mass deaths, and also the transfer of India's national capital to Delhi in the early decades, and the attendant loss of political influence).

During my very early years, growing up in a deeply idealistic household with a Mother who (despite not having any college degree) was a relentless reader of books, big and small, anywhere and everywhere, and keenly observant of events around the world long before our current information age, and a Father who had spent five years of his young life as a freedom fighter in a British detention center, thereby sacrificing career pursuits for financial and material security- glimpses of what the staggering 150 or so years of Bengal's immediate past history meant in virtually every imaginable field, were being brought to my brother and me on a daily basis. Those early growing years, we were not even in Bengal- as an employee in the Central Government's Department of Statistics, my Father was posted in Allahabad in northern India- a city in the Hindi-speaking part of India which was 550 miles from Kolkata. And yet, Bengal was perpetually within our grasp (even as my parents taught us the importance of diverse languages, cultures and people), such was their natural affinity for anything Bengali. For them, it was not even a conscious choice- it was simply a part of our daily lives, far from the province of our origin, whose revitalizing influence on them was evident every day, in every way.

Despite my Father's very modest means in those years, our home was never lacking in cultural stimuli- we subscribed to the incomparable Bengali weekly (literary) periodical, Desh (which in my opinion has as glorious a history of sterling authors and scholars as anything The New Yorker boasts about, and I have perused both over extended periods of time) for as long as I can remember, and from the pages of which my Mother would read us articles during the years we were barely honing our Bengali reading and writing skills. We also had the newspaper-boy drop off the northern Indian print edition of Ananda Bazar Patrika, Bengal's leading newspaper, every day. The headlines and photographs on every page of that paper brought Bengal home to us instantly, even as my brother and I rapidly consumed all the comic strips (translated to impeccable Bengali by hugely talented individuals from the remnants of the renaissance) and then the sports pages- football, to tennis, to cricket, to snooker, to chess. And we had an older valve-based radio set (an Ultra, my Father would tell us) which picked up All India Radio, Calcutta remarkably well. And it is how, through the music propagated into the airwaves through this Ultra that the captivating, irreplaceable voice of Hemanta Mukhopadhyay (hereafter HM) captured my young imagination and made it indelible for life- this will be one of the starting points of the 5-part essay I plan to write about this genuine "Baritone of our Renaissance" on the occasion of his centennial year.

This is not intended as a biographical essay; I can only hope that someone who feels just as indebted to HM for the introduction to, and identification with a Bengali musical identity will create an appropriate biographical tribute. My purpose for this centennial remembrance is to provide introductory sketches of HM's contributions to Bengali vocal music during an era rightly regarded as the golden age (late 1940s through mid-1970s) of that genre which may be perceived as an appropriate follow-up to the renaissance creativity of poets and composers with Rabindranath Tagore at the very crest.

With that in mind, I will therefore begin in this Part I with HM and his contributions to Rabindra-Sangeet (the Bengali terminology for the songs of Tagore which are the single greatest identifier of Bengal's renaissance musical culture), specifically with references to how his voice and style made Tagore's music literally come alive inside my own mind.

In my very early, pre-teen years in Allahabad, two voices primarily established Rabindra-Sangeet as a supremely elevating musical creation with an unsurpassed blend of lyrics and melody, the lyrics being both poetically sweeping and also imaginative and inspiring- these two voices belonged to Suchitra Mitra among the female singers and of course, HM among the male. For me in those early years, it was these two with the sage-like Pankaj Mullick as the connecting arch. My earliest recollection listening to HM singing a Rabindra-Sangeet had to do with several of his extraordinary renditions of Tagore's Swadesh songs (dedicated to the Motherland). I have since listened to several of the other exemplars of these songs, some of whose works approach a similar level of inspirational value, yet HM remains to this day for me the gold standard against which the others are invariably evaluated.

Hemanta Mukhopadhyay was not trained as a classical vocalist, unlike many others who rose high in the pantheon of Bengali and Indian music (especially those in the category of the emerging genre of modern songs)- and for this reason his work sometimes has tended to be if not derided outright, considered lesser relative to others trained in the structural aspects of classical ragas. To my equally untrained ear, however, the melody and lyrical content of his baritone, with the balance of sweeping notes and volumetric tonality- made listening to HM an absolute treat for my auditory senses.

In this article, I will discuss ten of HM's large compendium of superlative Rabindra-Sangeet, a small number intended to provide a glimpse into the lasting value of these songs in my life. We must also bear in mind that following Tagore's passing in 1941, Visva Bharati, the institution he created for dissemination of his vision of education and culture, held an exceedingly tight leash upon performances of Tagore's songs, and many an artist would languish in the shadows without the permission or authorization from the Visva Bharati Music Board. It is rather remarkable, then, that all those decades ago, despite such strangle-hold by the music board on the style and rendition of the songs relative to the Poet's approved notation, HM even as an outsider received approval from the same board! I definitely believe in this instance, by offering HM their approval, the board made the correct determination.

Of the ten in the sampler, two are of the Swadesh or Homage to the Motherland category, four from Puja or devotional, and the remaining four from Prem or Romance and Vichitra or Intrigue. Several from the much wider range of HM's Tagore songs will have been left out from this discussion.

Homage to the Motherland / Swadesh

My true formal introduction to both Rabindra-Sangeet, and also to HM as a resonant, mellifluous vocalist occurred via his rendering of two songs in particular (there were others which will not be covered here), O Amar Desher Mati, and Ayi Bhuvanamonomohini. As much as Rabindranath Tagore holds the virtually unmatched distinction as the author/composer of two national anthems (India/Bangladesh) and the inspiration behind a third (Sri Lanka), I would like to contend these two songs could easily vie for that distinction (also, there are some Tagore compositions which in my opinion could be considered anthems for the Earth). And in HM's absolutely soulful rendering, they find new meaning- to the extent that even 4 or 5 decades later, I am just as moved and filled with devotional wonderment the same way as when I heard them first. I will let the words and HM's singing speak for themselves. Here is a prose translation with the YouTube link:

Related Topic(s): BEAUTY; Grace; Heart; History; Mother; Mothers; Music; Prayer; Radio; Renaissance; (more...) Renaissance; SOUL; Soul; Tagore; Time, Add Tags  (less...)
Add to My Group(s)
Go To Commenting
The views expressed herein are the sole responsibility of the author and do not necessarily reflect those of this website or its editors.

STAY IN THE KNOW
If you've enjoyed this, sign up for our daily or weekly newsletter to get lots of great progressive content.
Series: "Golden Age Bengali Music"