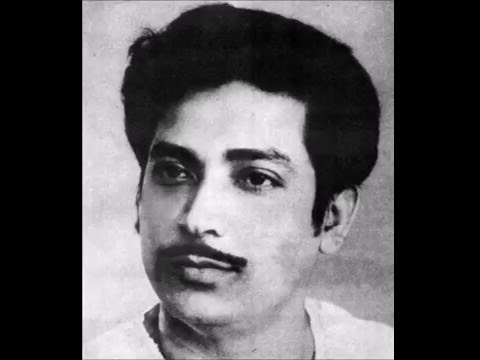 Following the renaissance epoch of Bengali vocal music between 1900-1950, established by key creative figures such as Rabindranath Tagore (1861-1941), Dwijendralal Roy (1863-1913), Rajanikanta Sen (1865-1910), Atul Prasad Sen (1871-1934) and Kazi Nazrul Islam (1899-1976), five compositional geniuses who blazed their trails into musical history, and to whom Bengal's musical heritage owes its identity to this day--there occurred an expected vacuum in the early post-renaissance period (described in the literary domain as the Kallol Yuga), especially since the passing of Tagore in 1941. Interestingly, however, there then appeared in the musical horizon a significant number of fresh creative figures (who stand apart from the long-standing purely classical vocal traditions in Bengal and India) between the late 1940s and continuing through the 1960s. To many of us growing up in Bengal (primarily in Calcutta, now Kolkata) in the 1960s and '70s, modern Bengali music was an absolute storehouse of melodic treats, populated by extraordinarily talented artists and composers, even a short listing and discussion of whose work would easily fill several chapters in a book.

The major post-renaissance follow-up in the 1940s-'60s time frame was crowded with absolutely incandescent figures both by way of vocalists as well as lyricists and composers. To cite only a minuscule fraction (note that much of the current musical efforts across Bengal frequently play off of the timeless creations generated by this epoch), we have Pankaj Kumar Mullick, Sachin Dev Burman, Hemanta Mukhopadhyay, Manna Dey, Shyamal Mitra, Manabendra Mukhopadhyay, Jatileshwar Mukhopadhyay, Akhil Bandhu Ghosh, Dwijen Mukhopadhyay, Satinath Mukhopadhyay, Sandhya Mukhopadhyay, Pratima Bandyopadhyay, Nirmala Mishra, Salil Chowdhury, Gouriprasanna Majumdar, Pulak Bandyopadhyay, and several others.

Projected against this galaxy, one particular performer quietly found his own niche with very little fanfare. Yet, I must say from personal recollections- I have been consistently drawn to his astonishingly melodious music, which stood apart for its extraordinary modernity--imbued with gentle jazz- and rock-like undertones, and lyrics that were decades ahead of what came to be recognized as modern music even in the West. His voice was not spectacular- neither base nor baritone, and definitely not marked by any falsettos or vocal razzle-dazzle. Yet, his music is simply marinated in a sound of pure romanticism that is unmistakably gripping to anyone romantically inclined towards fellow man or life itself. Pintu Bhattacharya (1940-2011), PB, whose songs never "caught fire' in the traditional sense, brought out path-breaking, deceptively simple-sounding music even as I grew from my teenage years to my early 20s, was purely representative, for instance, of my (and my brother's) late teens when my relatively newly married Didi (older sister) was in her 20s, my Jamaibabu (brother-in-law) in his 30s--and our collective imaginations romanticized walks by the beaches of Digha, the joy of a springtime day, or the poetic imagination relative to a romantic flame. Against the backdrop of a rich and varied musical treasure chest, of which there was much that occupied by mind and heart, there was always a special place reserved in my heart for PB. His Cholo Na Dighar Soikot Chhere, Ek Tajmahal Goro, Tumi Nirjon Upokule, Jani Prithibi Amay Jabe Bhule, and other numbers are simply indelible in my musical psyche. Of this timeless melodious harvest, I am presenting here a selection of a meager eight--a selection that was difficult enough that several others that equally draw me in had to be left out simply for the reason of the need to conserve space. We must also note that unbeknownst to many, PB was assisted by (or rather collaborated with) some of the major composers and lyricists of the post-renaissance epoch--including such superlative creative figures as Salil Chowdhury, Nachiketa Ghosh, Pulak Bandyopadhyay, Sudhin Dasgupta, Shyamal Gupta and others. I have also appended very short commentaries on each of the eight selections along my translation of each into English.

Related Topic(s): Heart; Love; Music; Music; Poems; Songs; Tagore, Add Tags
Add to My Group(s)
Go To Commenting
The views expressed herein are the sole responsibility of the author and do not necessarily reflect those of this website or its editors.

STAY IN THE KNOW
If you've enjoyed this, sign up for our daily or weekly newsletter to get lots of great progressive content.
Series: "Golden Age Bengali Music"