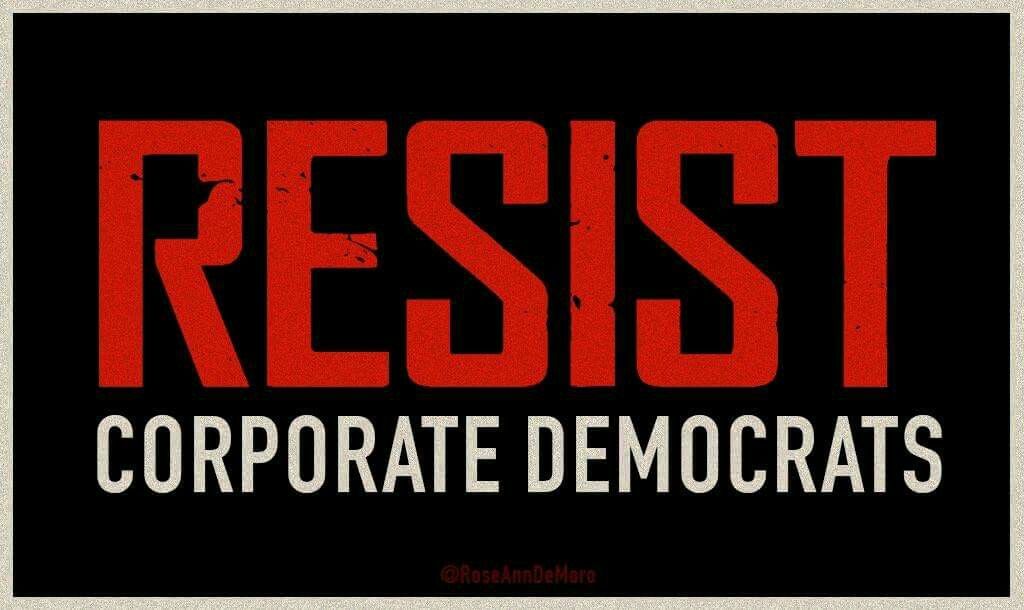 Pitted against a corrupt, incompetent charlatan and his posse of corrupt, incompetent enablers, the Democratic party was anticipating a "wave" of electoral victories across the country. It never materialized. In fact, although they managed to win the White House, Democrats did not pick up a single seat in the House and they failed to take control of the Senate, both of which were widely anticipated. Pollsters, pundits and surrogates misread the mood of the public by a mile. Again.

In the aftermath of their disastrous 2016 campaign, Democratic party leaders blamed Jill Stein, Susan Sarandon, the Green Party, women and Vladimir Putin for their loss. Anyone and everyone except their own anti-worker, pro-war, neo-liberal agenda. Russia-gate: a Democratic propaganda operation from start to finish. Surely this time party leaders would admit their mistakes and vow to take a long, hard look inward.

Not on your life. They're doing the opposite. Again.

Two days after the election House Democrats were reportedly "furious" for being tagged with policies they do not support. Rep. Abigail Spanberger (D-VA) went medieval, blaming the failure of the blue wave on nonsense like M4A and the Green New Deal. "We need to not ever use the words 'socialist' or 'socialism' ever again," she told her caucus. "We'll get [expletive] torn apart in 2022." Listening to Rep. Spanberger you wouldn't know that polling indicates a huge majority of Democrats actually favors both of these initiatives. Maybe someone should [expletive] tell her? Maybe someone could point out how [expletive] popular they are? Then again, she was CIA for 12 years so she probably knows already.

(Subtle parenthetical hint: if you are trying to make sense of her argument and saying to yourself, "something is wrong here," turn the picture a bit. You've been taught to believe Democrats like Rep. Spanberger are working-class heroes who get elected in order to help improve the lives of their constituents. They aren't, and she wasn't. She's there to ensure corporate control, in this case for-profit health care. When you look at the situation from this perspective, her position makes perfect sense.)

Rep. Jim Clyburn (D-SC) was equally as glib, and equally as guilty of gaslighting his audience. If Democrats run on Medicare for All, he bemoaned, "we're not going to win." Keep in mind he's not talking about the hourly wage-earners in his district who would benefit greatly from single-payer health care. By "we" Rep. Clyburn means he, his corporate masters and his fellow sell-outs, all of whom are intent on maintaining the current dysfunctional system. It's their cash cow. "None of our candidates are supporting [. . .] socialism. But we still got tagged by it," whined Sen. Debbie Stabenow (D-Mich.), a close ally of "Wall Street" Chuck Schumer (D-NY). Given the drift, who could object to Biden "advisor" John Kasich warning Democrats of a socialist take-over by the "far left?" Kasich, you might recall, is a right-wing religious extremist who tried to outlaw abortion and gut Social Security. Dude! He fits right in!

Nevertheless, clocks do have hands and the hands do circle, and, since smearing progressives worked so well in 2016, party leaders must have figured they could unleash the Kraken this time around. "[T]he Democratic party needs to clearly push that we are not supportive of ideas like socialism or defunding the police or" --- wait for it --- "anti-Semitism." Thank you, Florida Rep. Stephanie Murphy, for labeling Democrats religious bigots. As for what might have motivated her to make such a shocking claim look no further than the successful smear campaign directed at the former head of the Labour Party in Britain. Jeremy Corbin, like AOC & Ilhan Omar a Democratic Socialist, was intent on reversing decades of neo-liberal austerity in the UK by raising taxes on the wealthy, cutting the military budget and nationalizing a number of key industries, including transportation and energy. Instead he got crushed, falsely accused of "anti-Semitism." Bye-bye Corbin. Bye-bye populist programs. Will it work in the US? Corbin resigned his leadership in disgrace and was recently suspended from the party altogether. You tell me.

What we know for certain is every one of the political hacks quoted above is lying. Federal programs like Social Security, the Post Office and the VA are enormously popular, fiscally responsible and decidedly socialistic. They do exactly what they were intended to do, proving governing from the federal level can work. Democratic leaders are eagerly "catapult ing" the same misinformation as Reagan, a big-time corporate grifter. Turn the picture. Government is not the problem. Government is the solution, especially, as we have seen, when the country faces a national emergency. What's needed is a coordinated, nation-wide response that clarifies the roles and responsibilities of everyone involved, from state governments to federal agencies. "E Pluribus Unum," no?

Democratic party leaders should be embarrassed. All their white noise about not being able to win elections when they run on "socialist" ideas turns on a cacophony of falsehoods. First off, it's incorrect to say progressive Democrats ran on "socialism." They didn't. They ran on specific programs like Medical for All and the Green New Deal, which, as the recent elections show, actually helped them win. AOC, for example, reminds voters in a twitter feed that socialist-inspired candidates won every single race in 2020: "Every. Single. One." In a follow-up she underscores the point: running on "M4A, Green New Deal" wins elections. Period. End of discussion. Curious, then, isn't it, how Spanberger, Stabenow, Murphy and Clyburn tell voters the exact opposite?

There's been a lot of speculation about what kind of agenda President-elect Biden will implement, whether he can be pushed to the left or whether he'll continue to follow the neo-liberal path of misery and make-believe set forth by his predecessors. One good measure will be his Cabinet selections. Recent reports suggest Biden is thinking of appointing hardcore boot-lickers like Multiple Meg Whitman and John Kasich, along with know-nothing Cindy McCain. Even scarier, Susan Rice, Tony Blinken and Michèle Flournoy are said to be in line for roles in national security and intelligence. If the reports hold true, get ready for more warmongering on behalf of corporate lunatics.

Remember this date: 21 November 2008. It's when newly-elected President Barack Obama nominated Timothy Geithner Secretary of the Treasury. Geithner was the former president of the Federal Reserve and one of the culprits responsible for fleecing America in 2007. He was Obama's first appointment, made weeks before he'd assembled the rest of his Cabinet and an early sign things were about to go horribly wrong. He put the Wall Street crook who helped destroy the economy in charge of the economy. The rest is history.

Will President-elect Biden do the same? Will his Cabinet picks form a gaggle of corporate-driven, austerity-loving, anti-worker dregs? Or will it be a cross-section of thoughtful voices contributing to reasonable solutions?

Related Topic(s): Corporate; Democratic; Election; Neo-liberal; Obama, Add Tags
Add to My Group(s)
Go To Commenting
The views expressed herein are the sole responsibility of the author and do not necessarily reflect those of this website or its editors.