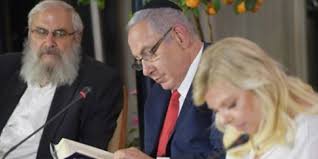 On Tuesday Israeli Prime Minister Netanyahu used the Hebrew Bible/Old Testament to threaten the Shiite Muslim Republic of Iran. In a speech at an event honoring Joseph Trumpeldor, a Jewish Zionist who was killed in 1920 fighting Shiite Muslims, Netanyhau referenced the Book of Esther from the Hebrew Bible/Old Testament. The Book of Esther is what the Jewish festival of Purim is based on.

The Book of Esther is known by historians as being a book of fiction, but to religious Jews and Christians, it is not only factual, but as With three tries the page linked to [Netanyahu] 'points out' would not load, so I removed the link. Netanyahu points out, the Bible is the Word of God and Esther is part of the Word of God.

The Book of Esther involves the fictional Jewish character of Esther. She marries the king of Persia, which is modern-day Iran. One of the king's advisers, Haman, wants to kill all the Jews in Persia. Esther convinces the king to change the law so that it allows Jews to kill Haman, along with people who they believe are a threat to them. This results in the murder of over 75,000 Persians. It's very concerning that a religious nation such as Israel, and which believes in such fictional and ungodly Bible stories, has an unknown number of nuclear weapons and several ways of delivering them, including via submarines.

For decades Netanyahu has been pushing for a US war against Iran, just as the Hebrew Bible/Old Testament-based Jewish state of Israel and the neoconservatives were successful in getting US politicians from both parties to launch the Iraq War for Israel's benefit, and for the benefit of the US politicians whose careers are advanced by the powerful Israel lobby when they do Israel's bidding. Ever since 1992 Netanyahu has been falsely claiming that Iran is anywhere from five to seven years, to as little as less than a year, away from having nuclear weapons.

In his speech/threat to Iran, Netanyahu made an indirect reference to the Iran nuclear agreement when he said that Israel "is not pinning our hopes on any agreement with an extremist regime such as yours." (If an agreement is refused, war will eventually be the result.) This is in reference to Joe Biden indicating he's willing to consider bringing the US back into the nuclear agreement, which Donald Trump reneged on. However, Biden is beholden to the Israel lobby, just as the vast majority of US politicians are. There is a strong chance that Biden will require demands on Iran that he and the Israel lobby know Iran won't agree to, thus preventing the US from rejoining the agreement and moving us all closer to a new religious war for the Jewish state.

The antiquated thinking of Netanyahu is a very real danger in the nuclear age we live in. We need to take to heart, and act upon, the sage advice from Albert Einstein, who wrote:

Bob Johnson is a paralegal and a freelance writer in Florida. He was raised Roman Catholic, but after reading Thomas Paine's The Age of Reason, he became a Deist. In 1993 he founded the World Union of Deists and in 1996 he launched the first web (more...)
Related Topic(s): Bible And Politics; Einstein; God; Iran; Iran Nuclear Deal; Iran Versus Israel; Israel; Israeli American Relations; Israeli Apartheid; Israeli Fascism; (more...) Israeli Interference In Politics; Israeli Iran Conflict; Israeli Pressure On US; Israeli_Propaganda; Israeli_intransigence; Thinking; US-Iran Talks; USS Liberty, Add Tags  (less...)
Add to My Group(s)
Go To Commenting
The views expressed herein are the sole responsibility of the author and do not necessarily reflect those of this website or its editors.