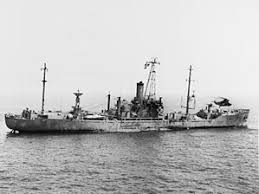 The attempted false flag attack on the USS Liberty led to nuclear bombs nearly being dropped on Cairo, Egypt. As long as there are nuclear weapons in the world, there is reason to worry a mistake will be made leading to nuclear armageddon. It has nearly happened a number of times before. It could almost literally be a misinterpretation of a flock of starlings flooding a radar screen. In the case of the attack on the USS liberty, the mistake was identifying the wrong country as the attacker.

The nuclear-armed fighter jets that had been dispatched by President Lyndon Johnson to Cairo were recalled only minutes before they reached the city. "President Lyndon Johnson dispatched nuclear-armed fighter jets to drop nuclear bombs on Cairo, Egypt. They were only recalled at the last minute, when Johnson realized that it was the Israelis - and not the Egyptians - who had fired on the Liberty."

In the words of Phil Ochs, "There but for fortune," another mushroom cloud would have arisen above death and destruction.

A fitting comment I read on one video about the attack on the USS liberty:

"So if Egypt attacked us, we would nuke them. But if it was Israel, then nothing is done except to cover up for them. And this was 50 years ago. How long has Israel been running America?"

A number of things I had not seen previously about Israel's false flag attempt to sink the USS liberty and blame it it on Egypt to drag the United States into Israel's war with the Islamic country, are shown below.

There are many sources with the same information but the following is from this article, click here:

Fifteen years after the attack, an Israeli pilot approached Liberty survivors and then held extensive interviews with former Congressman Paul N. (Pete) McCloskey about his role. According to this senior Israeli lead pilot, he recognized the Liberty as American immediately, so informed his headquarters, and was told to ignore the American flag and continue his attack. He refused to do so and returned to base, where he was arrested.

Later, a dual-citizen Israeli major told survivors that he was in an Israeli war room where he heard that pilot's radio report. The attacking pilots and everyone in the Israeli war room knew that they were attacking an American ship, the major said. He recanted the statement only after he received threatening phone calls from Israel.

The pilot's protests also were heard by radio monitors in the U.S. Embassy in Lebanon. Then-U.S. Ambassador to Lebanon Dwight Porter has confirmed this. Porter told his story to syndicated columnists Rowland Evans and Robert Novak and offered to submit to further questioning by authorities. Unfortunately, no one in the U.S. government has any interest in hearing these first-person accounts of Israeli treachery.

Israel attacked the USS Liberty using UNMARKED AIRCRAFT. This is the single fact which proves Israel knew exactly who they were attacking. Israel's story is that they thought USS Liberty was an Egyptian ship and therefore a legitimate target of war. Were that true, there would be no reason to attack a supposedly Egyptian ship with unmarked aircraft. The only possible reason to use unmarked aircraft to attack the ship is that Israel knew it was an American ship and intended to sink it, then to blame the attack on Egypt.

Moorer, who as top legal council to the official investigation is in a position to know, agrees that Israel intended to sink the USS Liberty and blame Egypt for it, thus dragging the United States into a war on Israel's behalf. This seems to be a common trick of Israel. Starting with the Lavon affair (click here), through the USS Liberty, to the fake radio transmitter that tricked Reagan into attacking Libya (from the Cynthia McKinney article, Why Obama Attacked Libya click here), to potentially 9/11 itself, Israel's game is to frame Arabs and set them up as targets for the United States.

The real question facing the American people is why the US Government seems more concerned with protecting Israel after they are caught playing these dirty tricks, rather than doing something to convince Israel not to kill any more Americans.