This is the second story on police brutality and what may be considered abuse of power by those employed to protect and serve. And as the third addition overall to this series, these are extreme cases sensational enough to grace a number - if not most - cop-watch sites that keep track of the police.

Police have a very tough job to do. Some are stressed-out because of the overwhelming responsibilities with maintaining order. Due to budget constraints of cities, counties, and even villages and townships, cops are working longer hours and extended weekly and monthly schedules that are not only challenging, they can be overpowering and grueling. Without question, they're concerned about volatile and powerful guns on the streets. Criminals are very well armed these days and it seems like it's guns gone wild out there. Most importantly, cops want to return home to their families after they're done working. And when things get frazzled and ugly, self-preservation and the preservation of others in the blue line is paramount. It's always been this way and will always remain so.

Post-911 America has seen more of having Johnny and Janey Law around. Some complain there has been an erosion of personal rights; yet others say it's all for the good - a better protection for society as a whole.

This article, like another that appeared on OpEdNews.com on June 26, has been written in hard-copy journalism style, keeping commentary to a bare minimum. It's been written with just the facts, mam type of type, old-time newspaperman police-reporting lingo. 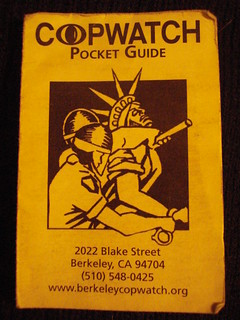 Cop-watch groups and websites are quite active these days. Horrible decisions by police can turn into terrible consequences for victims, along with becoming PR nightmares for officials like police chiefs and mayors.
(Image by anarchosyn)   Details   DMCA

Cowley could face one to 15 years in prison if convicted and his initial court appearance is scheduled for July 7. Former Detective Cowley's bail has been set at $10,000. He was booked into the Salt Lake County Jail on the afternoon of June 26 and was released. Cowley's partner, Detective Kevin Salmon, is not facing charges at this time, FOX 13 News reports.

Gill said both officers fired shots - but through their investigation, authorities determined Cowley was responsible for Willard's death. According to affidavits, West Valley City Police said they saw Willard go to a home to buy drugs and although they did not immediately make any arrest, police kept with their surveillance, following Willard to an apartment complex where they allege they witnessed Willard "involved in drug activity" in her car. The warrant states Detective Kevin Salmon and former Detective Cowley got out of an unmarked car and approached Willard. The warrant does not state whether the detectives identified themselves as police officers. However, Cowley's lawyer, Lindsay Jarvis, said they repeatedly identified themselves as police and when Danielle Willard tried to drive off, she hit former Detective Cowley. Jarvis issued a statement in June 26 to FOX 13, calling the decision to charge Cowley "politically motivated." She said Cowley maintains his innocence. (See ibid: http://fox13now.com/2014/06/19/charged-officer-charged-with-manslaughter-in-shooting-death-of-west-valley-woman/.)

* Are Good Samaritans, even those who are ordained ministers, free from commando-style police attacks? Well, Jonathan Ayers, deceased pastor of Shoal Creek Baptist Church in Lavonia, Ga., could certainly be considered such a victim. Rev. Ayers was driving along on September 1, 2009, and recognized a woman walking that he'd known for a number of years. Pastor Ayers, only 28 years old, offered a ride to this woman, Johanna Kayla Jones Barrett. Barrett had no permanent home and was living with her boyfriend at an extended-stay, northeast-Georgia motel. Ayers even gave Barrett the $23 that was in his pocket to help her out with rent. Ayers had helped the woman in the past as part of his ministry, his wife later confirmed, like he often aided many others. (See: http://www.policestateusa.com/2014/jonathan-ayers/.)

Ayers pulled into gas station in Toccoa, Ga., where the pastor proceeded to withdraw another $20 from an ATM. He reportedly withdrew the sum as a bit more cash with which to aid Ms. Barrett, and, with cash in hand, Ayers then got back into his car. Immediately after the ATM withdrawal, a black SUV veered into the gas station and three men hopped out and aimed guns at Ayers' vehicle. Fearing for his life, Ayers attempted to evade the trio of belligerent gunmen. Unfortunately, the hostile forces weren't carjackers or armed robbers as they appeared. They were undercover police officers dressed in plainclothes who had been trailing Ms. Barrett, who had been suspected of using narcotics. When Pastor Ayers shifted his car into reverse and hit the gas pedal, the police report states that his vehicle grazed (or nearly grazed) Agent Chance Oxner, of the Mountain Judicial Circuit Narcotics Criminal Investigation & Suppression (NCIS) Team. Agent Billy Shane Harrison opened fire, striking Ayers in the liver. Ayers' vehicle continued a short distance, then crashed into a utility pole alongside the road. (See ibid: www.policestateusa.com/2014/jonathan-ayers/)

While Pastor Ayers was being picked up by paramedics and placed in an ambulance, the minister reportedly told medical personnel that he thought he was being robbed and did not know the heavily armed men were police officers. Hospital records indicate that Ayers survived about four hours after being shot; long enough to say goodbye to his young, pregnant wife, Abigail. Before he died on the hospital operating table, he told her (according to an article in the Atlanta Journal Constitution), "I didn't do anything wrong; I love you. Take care of yourself." (See ibid: www.policestateusa.com/2014/jonathan-ayers/))

No narcotics were found in Ayers' vehicle or in his possession. An autopsy showed no drugs in his system. He was a complete bystander to this investigation, which yielded a possible transaction involving $50 worth of drugs reportedly found in Barrett's possession. (See ibid: www.policestateusa.com/2014/jonathan-ayers/)

Daniel Parker, one of Ayers' friends and former colleagues, spoke very highly of Rev. Ayers, saying it was no surprise that he would have been helping a woman in need at the time of his death. Parker said in The Northeast Georgian pages, "He was the kind of guy who would do whatever he could to help you, that would give you what you needed and never complain about it." (See ibid: www.policestateusa.com/2014/jonathan-ayers/))

Jonathan Ayers had a blog, titled "New Beginnings." It contained inspirational messages related to his ministry, demonstrating his enthusiasm for his work and his life with his wife, Abby. Following the shooting, the department stood by the agents, backing their military-like tactics and use of fatal force on the driver of a vehicle which was being driven at a relatively slow speed, in reverse. Harrison claimed that he believed the pastor was trying to run over police officers, and therefore felt it necessary to shoot him. A grand jury ultimately agreed with Harrison's logic and declined to indict the officers on criminal charges. After some paid time off, the agents all returned to duty without consequence. This enraged some members of the community.

Related Topic(s): Death; Death; Death; Investigation; LAPD; Law; Sheriff; Shooting; Threat, Add Tags
Add to My Group(s)
Go To Commenting
The views expressed herein are the sole responsibility of the author and do not necessarily reflect those of this website or its editors.