Did you know that there's a huge flying reptile in Preston County, W.Va.?

The thing is 800 pounds, has a 20- or 30-foot wingspan, and comes with talons six inches long. It has a horrid scream - such an ear-piercing noise that it rivals a locomotive whistle's blast.

According to a team of trappers and hunters, all billed as "West Virginia native sons," who comprise the cast of Destination America's Mountain Monsters, this beast, which according to a graphic regularly flashed across the screen during this particular feature of this creature, appears to be a pterodactyl left over from prehistoric times, and it's been flapping its wings around Preston County, W.Va., for a long time, feeding on both domesticated and wild animals.

"Teddy Roosevelt had it on his list of big game," says Jeff, the white-bearded, massive, mountain man (Jeff would look very much like Santa Claus in a that red Yuletide getup) who serves as the historian and researcher of the crew.

Mountain Monsters follows a strict formula, and in the opening scene of every episode (where the crew is riding to a destination somewhere in the Mountain State, or on rare occasions, in southeastern Ohio), Jeff gives the Appalachian Investigators of Mysterious Sightings (AIMS) team cramped inside an SUV a history lesson about the monster they've chosen to track down, as they ride to their latest adventure. 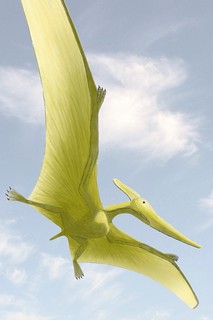 Pteranodon in flight: This thing looks a lot like Destination America's .Mountain Monsters depiction of the Snallygaster, an 800-pound flying reptile with a humungous wingspan that legend has it, inhabits Preston County, W.Va.
(Image by DSC82491)   Details   DMCA

Jeff goes on to say that the Snallygaster was first discovered in the mid-1700s by German immigrants in the Maryland-West Virginia area, and these new arrivals to this remote region gave the winged monster its name.

The guys, a rough-looking lot, with most appearing to be Civil War soldier lookalikes, quickly meet their first eyewitness, a guy named Bubba, who spends a lot of time in the woods and hills catching coyotes. Bubba tells the crew, where the six men stand within a copse - and with a valley's steep wall reaching up into the horizon in the distance - that he was checking his traps one day for coyotes and he heard a loud shriek that echoed through the hills.

"I saw something take a critter out of a trap. It had an immense wingspan and a long beak. The thing flew and grabbed this coyote in a trap, pulling the trap's stake right out of the ground and it flew up over that mountain. It had an 18- to 20-foot wingspan," Bubba says, pointing to the steep cliff in the distance.

The cast of Mountain Monsters consists of Trapper, the team leader, who does a lot of colorful narration for the show and often sprinkles the dialogue with a few 'choice' words; Buck, the adventurous rookie, who adds a lot of color by 'leading the charge' of night investigations into the creepy unknown; Huckleberry, the crew's security guy -- a massive monster of a mountain man; along with Willy and Wild Bill, the crew's trap builders, who always devise and build a trap in which to catch each monster of every show. Some of the traps they build are so far-fetched, weird, and crazy that every viewer realizes after a while that it's just reality-show theatrics; but some of the traps actually show genius ingenuity. And Willy and Wild Bill are adroit tradesmen, whether they're welding a metal frame together or hammering away at some wooden configuration they're creating to catch some wild, monstrous, Appalachian beast.

There are always two night patrols, where the crew goes out and hunts for beasts. These are big guys, and some are rotund heavyweights. Most of them have bushy wild beards. And they always tote rifles around, pointing them straight ahead while they listen for any little crackle of a branch or wild howls in the darkness of the wilderness. Thermal-imaging cameras catch heat-emitting animals out there in the wild darkness, and although it's quite speculative about whether anything in the hilly woods these mountain men trek is actually a monster, it never gets boring and is great entertainment, if, of course, you like this sort of thing.

With the five brandishing those nasty looking rifles, it's amazing that none of these guys ends up accidentally shooting one of their mates during these nocturnal adventures in the dark woods and the forested and brush-infested steep hills in the night's blackness. 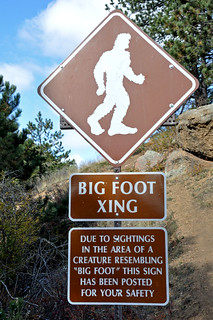 It's formula reality-show stuff, and the same series of events -- different scenes, dissimilar circumstances and varied counties, of course -- always prevail. Along with another monster for every show, of course -- but it's the same formatting pattern in each episode. Eyewitnesses the hunters and trappers talk to show videos of creatures they've captured digitally, or the howls and noises these creatures make that were caught on some kind of recording device. And the five hunters and trappers, circled around the video or recording machine, always jump back in bewilderment and anxiety when they collectively view, or hear, the monster, on whatever kind of electronic device their "eyewitness" is holding in his hands.

Sometimes, at the end of a show, a monster breaks out of the trap, as in the case of the Ohio Grassman, an 11-foot-tall, shaggy haired, 1,200-pound bigfoot that, legend has it, roams throughout rural and remote Perry County, Ohio. In one of two episodes of the Ohio Grassman, Wild Bill and Willie visit Wild Bill's Uncle Lee Roy's junkyard, find a dilapidated old van, and turn the thing into a trap by welding plate steel over its windows, making the thing a snug "bigfoot-catching apparatus." But in the end, after a crazed night in the woods hunting for the Grassman, a large hole is discovered that was torn through the side of the trap by this monster. And the boys are left wondering in awe and histrionic desperation about the creature's incredible strength. Yes, the TV viewer wonders not only if the monsters are made up and fictional, but if the show is, as well.

Is it true or is it just a hoax? Well, a lot of what occurs on Mountain Monsters is as corny and hokey as all get out, but it's great entertainment, that is, if you enjoy watching this sort of thing. The mountain men are all about the business of monster catching and they never give any political, religious or even an athletic opinion of any type. There's a lot of hooting and hollering about seeing a monster in the dark and in the Snallygaster episode, the trappers and hunters end the show inside a cabin deep in the woods with their rifles drawn. The only other inhabitant of the spartan structure is a little bird shivering in the rafter. There's all sorts of commotion going on outside and it sounds as if a herd of buffalo, maybe even a family of African elephants, are trying to break down the cabin's walls. After a few minutes of this cacophonous bedlam, Trapper, Buck, Huckleberry, Jeff, Willy and Wild Bill flee the cabin, running through the woods, with their rifles still pointed straight ahead - and they're all screaming wildly, and running around like crazy people trying to get somewhere. They're frantically trying to get to their vehicle, to jump in and cart them away from these horrors, I guess....

Related Topic(s): Animals; Entertaining; Fear; Hunters; Monsters; Psychology; Reality, Add Tags
Add to My Group(s)
Go To Commenting
The views expressed herein are the sole responsibility of the author and do not necessarily reflect those of this website or its editors.