Police incessantly and unmercifully beating a man with batons and shocking him with tasers as he lays supine on a street pavement in Long Beach, Calif., is shocking and repulsive. Sundry video versions of this incident, posted on YouTube -- have gone viral. It's the most infamous and nefarious example of police brutality so far this year in the United States - when this violent act was captured in early September of 2013 by digital dice and snake-eyed focus.

In the video, a man wearing only a tan pair of short pants is repeatedly bludgeoned by batons and tased by three policemen. Another cop joins in this torture session, wielding a very long, nasty-looking nightstick. Two other officers jump in while their mates slip on blue plastic gloves, not wanting to get any blood on their hands (nobody wants a blood-borne disease these days, after all). And after a bit, others in blue (including at least one woman police officer), join the circle of terror. Towards the end of the video, all the police are on their knees, doing something to this poor victim, and I hardly think it's trying to help the writhing guy. 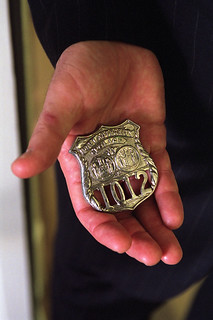 It looks like a true exercise in torture. The coming of the police state and a poor victim was picked out with the name Porfirio Santos-Lopez.

Excessive force? Police brutality? You be the judge -

And if you want to see an entire collection of this brutal scene, go to YouTube.com and type into the search bar "Long Beach police brutality," or "Santos-Lopez police beating". You'll find a slew of YouTube offerings that pop up.

It's disturbing and vile. I like to think that police officers are employed to protect and serve, but after viewing this video, I really am wondering about this -- is it just a myth and a lie? Have the police become our oppressors? Are they helpful and handy or are they horrible henchmen?

If a police department wants to use a video clip of police brutality to train rookies on how not to act towards a suspect, this would be an excellent choice for such a lesson. The old cliche, "Never beat a man when he's down," is captured in all its gore and egregious terror in any of the various offerings of the two versions on YouTube's menu.

The video was captured by a security camera outside of a liquor store near the corner of Locust Avenue and South Street in Long Beach. And another video, reportedly shot by a bystander near this street corner who used a cell phone camera to grab the scene, is also available in all the brightness of the California sun. Both versions show about the same thing: It looks a lot like a shark-feeding frenzy from the National Geographic Channel, or possibly, a pride of lions' kill. Only the actors are human, the prey is practically naked, and the aggressors are wearing blue uniforms and badges.

It's hard not to see this as anything but abject police brutality and abuse of power - a shocking and repulsive display of violence inflicted by authority. And to call it anything less would be phony and absurd. It's an atrocious, startling and evil scene. One of the bystanders exclaims that Porfirio Santos-Lopez's teeth were knocked out by a strike of a nightstick. Another witness cries out that she's shaking with fear and can't believe what she's seeing. Hearing this eyewitness commentary is commentary enough. Actually, the voices on this video say it all. Nothing else really needs to be said. . . .