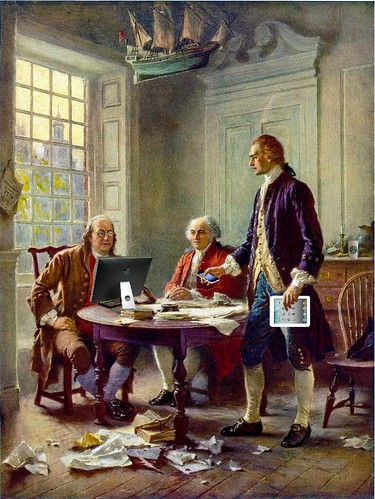 Imagine a video of Trump walking outside at the crack of dawn and holding his arms out and slowly lifting them as the sun rises. Around 35% of Americans would likely believe that by his pure will alone, Trump caused the sun to rise. This is why I find democracy and a democratic republic a questionable way to run a government of 300 million people. This concept may shock some, but let me ask; who was the most dangerous fascist government of the last 100 years, who were they, can anyone answer? The Nazis and they were originally a democratic form of government. The similarities to our government today are frightening.

Trump has already interred hundreds of Latinos and separated them from their children. He is constantly stirring up fear of "the Other". He defines the free press as the enemy of the people. I would be ashamed if my son lied like this person does. Apparently his father and grandfather would not.

This is the kind of thing that can happen when voters recognize no responsibility or logical understanding of the consequences of their vote. Their votes may be based on ignorance, lack of intelligence, superstition, or any number of wrongheaded thinking processes including hate and greed. Considering the power that an electorate has for any number of imaginable reasons, to place any number of perverse officials in our government is frightening to say the least.

At times I wonder if pure capitalism and the best-intended democracy or democratic republicanism can safely co-exist in a single government. Greed can be a powerful decider.

Alexis De Tocqueville said in his 1835 treatise on "Democracy in America" said that our democratic system is the "Tyranny of the majority". John Stuart Mill's "On Liberty" referred it to as a system in which "the majority enforces its will on a disadvantaged minority through a democratic process". James Madison referred to the same idea as the "violence of majority faction". And John Adams in Federalist 10 used the phrase of "tyranny of the majority".

In 1947 in an address to the House of Commons, Winston Churchill quoted an unknown speaker when he said "Democracy is the worst form of government except all those forms that have been tried from time to time". I wonder after this blotch on our American experiment if there can be such a government that mankind conceive. Maybe kindness and goodness is a cover for the darker regions of our collective souls.

Certainly a parliamentary system not any better, definitely not likely since the people do not choose their Senate or House of Lords or whatever nor do they choose their Prime Minister. Monarchies can be malevolent, or benevolent, depending on the King or Queen, and it can change from one to the other in the blink of an eye.

Why didn't our Founding Fathers gift us with a requirement of a full constitutional convention from time to time? Well, maybe they anticipated a day like today. I doubt that; personally I don't believe them motivated in that direction, and possibly not that smart. They were after all copy cats that constructed our constitution with cut and paste from documents of history, and mostly from an 800-year-old Iroquois Confederacy of six nations (the Hau de no sau nee, meaning people building a long house), the oldest living participatory democracy on earth.

All that said, is our form of government the best there can be? I doubt it. Maybe it is the best we can do at this point in our human evolution or de-evolution, whichever the case.

Related Topic(s): Children; Dangerous; Democracy; Democratic; Fascist; Government; History; Senate, Add Tags
Add to My Group(s)
Go To Commenting
The views expressed herein are the sole responsibility of the author and do not necessarily reflect those of this website or its editors.