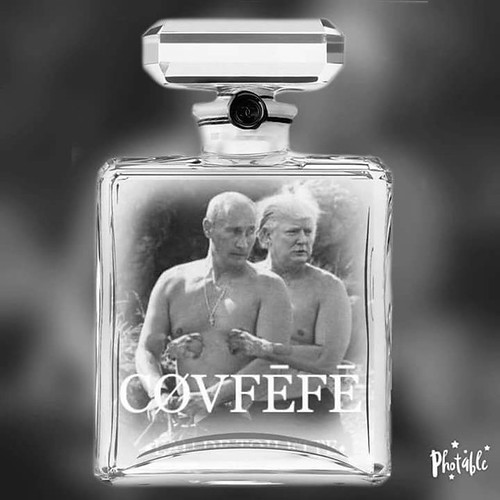 Enough is enough already! What real American would open the Peoples House to a common murderer, thug, dictator, and former KGB agent? You realize of course that orange is the color yellow working its way to red. That sure seems appropriate in this case. Well, here we are!

In the last year and a half I have come to believe that instead of Trump changing the American Psyche, and the Republican Party, he is actually revealing it

This guy said about women that they only give only 84% in the workplace suggesting women were worth 16% less than men because they have to take care of children. In that May 2011 Time article Trump attracted the ("A woman's place is in the home") 1950's misogynistic men who miss the days of men always wearing a hat and when "their" women always ironed their underwear.

This man who once said if Ivanka weren't his daughter he would probably date her. Actually should this surprise us considering his remarks about going into the "Miss Teenage America" dressing room because he could, or the infamous "Entertainment Tonight" bus remarks? That somewhat explains some who support him. Those who look upon women as objects to be used as opposed to human beings. Those red trucker caps sure came in handy.

Look at this fellow's history. He is operating golf clubs that are losing him millions every year. Most investments he has made end in bankruptcy. Trump Tower may actually be propped up by laundered money by some of his favorite Oligarchs. How can a man who cannot actually complete a simple sentence, much less a compound one be the best dealmaker of all time? This must attract his favorite people. Remember he loves the uneducated.

In July 2014 Trump tweeted "Ebola patient will be brought to the U.S. in a few days -- Now I know for sure that our leaders are incompetent. KEEP THEM OUT OF HERE!" That attracted the sanctimonious hypocrites and possibly many racists as well. Racism is after all one of his hallmarks.

A few months after his inauguration he tweeted: "Terrible! Just found out that Obama had my "wires tapped" in Trump Tower just before the victory. Nothing found. This is McCarthyism!" Additionally he tweets about the "Fake News" being the enemy of the American People; here is one such tweet: "The FAKE NEWS media (failing @nytimes , @NBCNews , @ABC , @CBS , @CNN ) is not my enemy, it is the enemy of the American People! 4:48 PM - Feb 17, 2017 ." Well, here come the conspiracy theorist. There were a lot of them. Who Knew!

Now look where we are. The guy who said he will not have time to play golf because he will be too busy "Making America Great Again." Apparently the only time he has to make America great again is Monday through Friday from 11:00 (after Fox and Friends and then surfing between CNN and MSNBC) until 4:00 when he tires of draining the swamp. I can only guess this appeals to the most gullible.

I did notice that the President of Montenegro was nowhere to be seen near Trump at the NATO conference. I suppose he learned his lesson from the abuse Trump showed him last year. Trump single-handedly whipped those NATO deadbeats into shape all by himself. He has always played this tough guy except when it came to his moment of bone spur cowardice. When I think of it, this must be what attracts bullies.

Now for that "Rusher Thing". After insulting our allies, as-well-as terrifying all of NATO, trump finally arrived for the original highlight of his trip. The continuation of The Trump-Putin love story. He kowtowed to Putin like a little girl; bragging how big and strong Putin was. He even winked at Putin at the beginning of their presser (look it up). He then goes on to denigrate US Intelligence in favor of Putin's denial of a cyber-attack on our country. I think this was aiding and abetting or giving comfort to a foreign adversary. Yet four out of five Republicans feel the joint presser was a success. WHAT! In his opening statement Trump said "But our relationship has never been worse than it is now. However, that changed as of about four hours ago." I remember "Kitchen Debates", duck and cover, and this little island called Cuba. I remember seeing friends cut down before their prime by Автом-degreeśт К-degreesл-degreeśшников-degrees, commonly known as the AK-47. How can you tolerate a Russian leader and KGB agent an invitation to a state dinner in the "Peoples House"? Millions of Americans have given their lives in wars and this traitor invites one of the largest supporters of many of our enemies, from Korea to Syria, to dine where the likes of Adams, Jefferson, Lincoln, Eisenhower, FDR, Regan (for you pseudo righties), and Obama have come before. Who the hell does this attract? Now the useful idiot has had to consult with his team before offering the Russians ten American citizens including an American Diplomat. Who does this attract?

So back to my original thought: In the last year and a half I have come to believe that instead of Trump changing the American Psyche, he is actually revealing it. In November we can begin to make America great again.

Related Topic(s): Donald Trump; History; Intelligence; NATO; People; Putin; Republican; Syria; Wars; White House, Add Tags
Add to My Group(s)
Go To Commenting
The views expressed herein are the sole responsibility of the author and do not necessarily reflect those of this website or its editors.