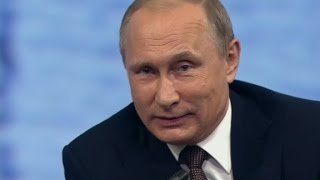 I have explained Russian President Vladimir Putin's Christian practice of turning the other cheek to Western provocations as a strategy to convey to Europe that Russia is reasonable but Washington is not and that Russia is not a threat to European interests and sovereignty but Washington is. By accommodating Israel and withdrawing from the multi-nation Iran nuclear-nonproliferation agreement, US President Donald Trump might have brought success to Putin's strategy.

Washington's three main European vassal states, Britain, France, and Germany, have objected to Trump's unilateral action. Trump is of the opinion that the multi-nation agreement depends only on Washington. If Washington renounces the agreement, that is the end of the agreement. It doesn't matter what the other parties to the agreement want. Consequently, Trump intends to reimpose the previous sanctions against doing business with Iran and to impose additional new sanctions. If Britain, France, and Germany continue with the business contracts that have been made with Iran, Washington will sanction its vassal states as well and prohibit activities of British, French, and German companies in the US. Clearly, Washington thinks that Europe's profits in the US exceed what can be made in Iran and will fall in line with Washington's decision, as the vassal states have done in the past.

And they might. But this time there is a backlash. Whether it will go beyond strong words to a break with Washington remains to be seen. Trump's neoconservative pro-Israel National Security Adviser John Bolton has ordered European companies to cancel their business deals in Iran. Trump's ambassador to Germany Richard Grenell has ordered German companies to immediately wind down their business operations in Iran. The bullying of Europe and blatant US disregard of European interests and sovereignty has made Europe's long vassalage suddenly all too apparent and uncomfortable.

Germany's Chancellor Angela Merkel, previously a loyal Washington puppet, said that Europe can no longer trust Washington and must "take its destiny into its own hands."

European Commission President Jean-Claude Juncker said that Washington's leadership had failed and it was time for the EU to take over the leadership role and to "replace the United States." Various French, German, and British government ministers have echoed these sentiments.

The cover story of the German news magazine Der Spiegel, "Goodbye Europe," has Trump giving Europe the middle finger. The magazine declares that it is "Time for Europe to Join the Resistance."

Although European politicians have been well paid for their vassalage, they might now be finding it an unworthy and uncomfortable burden.

Whereas I respect the virtue of Putin's refusal to reply to provocation with provocation, I have expressed concern that Putin's easy acceptance of provocations will encourage more provocations that will increase in intensity until war or Russian surrender become the only options, whereas if the Russian government took a more aggressive position against the provocations, it would bring the danger and cost of the provocations home to the Europeans whose compliance with Washington enables the provocations. Now it seems that perhaps Trump himself has taught that lesson to the Europeans.

Russia has spent several years helping the Syrian Army clear Syria of the terrorists that Washington sent to overthrow the Syrian government. However, despite the Russian/Syrian alliance, Israel continues illegal military attacks on Syria. These attacks could be stopped if Russia would provide Syria with the S-300 air defense system.

Israel and the US do not want Russia to sell the S-300 air defense system to Syria, because Israel wants to continue to attack Syria and the US wants Syria to continue to be attacked. Otherwise, Washington would call Israel off.

Several years ago before Washington sent its Islamist proxy troops to attack Syria, Russia agreed to sell Syria an advanced air defense system, but gave in to Washington and Israel and did not deliver the system. Now again in the wake of Netanyahu's visit to Russia we hear from Putin's aide Vladimir Kozhim that Russia is continuing to withhold modern air defenses from Syria.

Perhaps Putin believes he has to do this in order not to give Washington an issue that could be used to pull Europe back in line with Washington's policy of aggression. Nevertheless, for those who do not see it this way, it makes Russia again look weak and unwilling to defend an ally.

If Putin believes that he will have any influence on Netanyahu in terms of selling peace agreements with Syria and Iran, the Russian government has no understanding of Israel's intent or Washington's 17 years of war in the Middle East.

I hope Putin's strategy works. If it doesn't, he will have to change his stance toward provocations or they will lead to war.

Related Topic(s): France; Iran; Israel; Putin; Spiegel; Strategy; Syria, Add Tags
Add to My Group(s)
Go To Commenting
The views expressed herein are the sole responsibility of the author and do not necessarily reflect those of this website or its editors.