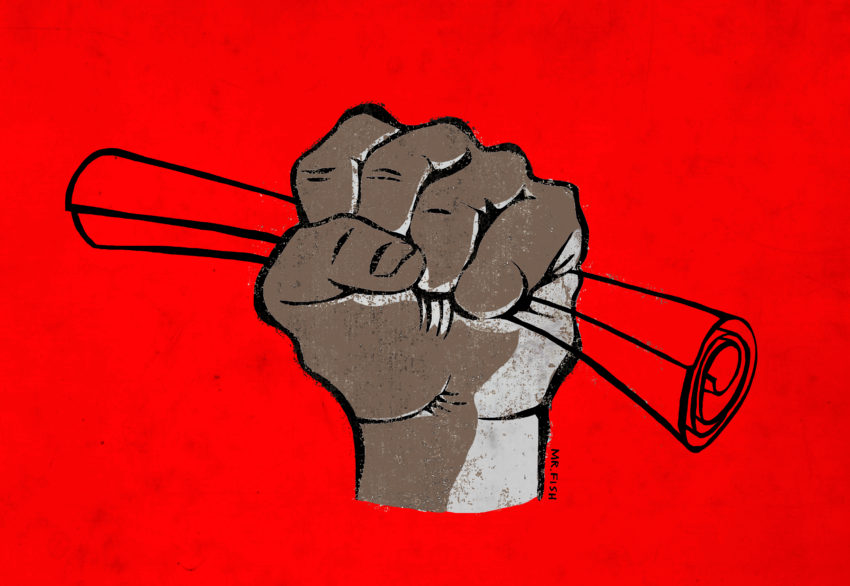 Chris Hedges gave this talk to 27 graduating students who were formerly incarcerated -- several of whom he taught in prison -- and their families at Rutgers University on Friday. The ceremony was held by the Mountainview Program at Rutgers, which helps students complete their degrees at Rutgers after they take college courses inside prisons through the New Jersey Scholarship and Transformative Education in Prisons Consortium (NJ-STEP) program.

Several of you are my former students: Boris, Steph, Tone, Hanif and Ronal -- though to be honest it is hard for me to use the word "former." To me you always will be my students. I have spent many hours with you in prison classrooms. I know the scars you bear. You will bear these scars, this trauma, for life. Own your suffering. Do not deny it. And know that healing comes only by reaching out to others who suffer. It is to say to those thrown aside by society: "I too was despised. I too was where you are. I too felt alone and abandoned. But like me, you can and will endure." I am not romantic about suffering. I saw a lot of it as a war correspondent. Suffering can make some people better. Others, it degrades and destroys. But those who surmount suffering, who hold fast to compassion and empathy, can become what Carl Jung called "wounded healers."

Thornton Wilder, in his play "The Angel That Troubled the Waters," wrote, "Without your wounds, where would your power be? ... The very angels themselves cannot persuade the wretched and blundering children on earth as can one human being broken on the wheels of living. In love's service, only wounded soldiers can serve." And there was something else I learned as a war correspondent: Education is morally neutral. The highly educated can be as cruel and sadistic as the illiterate. This is why so many human predators who profit from the misery of the poor in corporations such as Goldman Sachs have been groomed in Ivy League universities. This is why James Baldwin wrote that "brilliance without passion -- and by this he means moral passion -- is nothing more than sterility."

"In your experience of the world. How do people change?" Harper asks.

"Well it has something to do with God so it's not very nice," the Mormon mother answers. "God splits the skin with a jagged thumbnail from throat to belly and then plunges a huge filthy hand in, he grabs hold of your bloody tubes and they slip to evade his grasp but he squeezes hard, he insists, he pulls and pulls till all your innards are yanked out and the pain! We can't even talk about that. And then he stuffs them back, dirty, tangled and torn. It's up to you to do the stitching."

"And then get up," Harper says. "And walk around."

Trauma is not static. It is dynamic. It is written on your flesh. These scars will keep you honest if you use them to see your own face in those who are demonized -- women, immigrants, the LGBTQ community, Muslims, poor people of color. If truth is to be heard, as Theodor Adorno wrote, suffering must be allowed to speak. Flannery O'Connor recognized that the moral life always entails confrontation with the world. "St. Cyril of Jerusalem, in instructing catechisms, wrote: 'The dragon sits by the side of the road, watching those who pass. Beware lest he devour you. We go to the Father of Souls, but it is necessary to pass by the dragon.' No matter what form the dragon may take, it is of this mysterious passage past him, or into his jaws, that stories of any depth will always be concerned to tell, and this being the case, it requires considerable courage at any time, in any country, not to turn away from the storyteller."

There are people in this room who committed crimes, but there are no criminals here today. Not that criminals do not exist. Is it not criminal to allow more than 12 million children in the United States to go to bed hungry every night while Amazon, which earned $11 billion in profits last year, paid no federal taxes? In fact, in our system of corporate welfare, Amazon received a $129 million tax rebate from the federal government. Is it not criminal that half of all Americans live in poverty, or near-poverty, while the three richest men in America, including the founder of Amazon, Jeff Bezos, have combined fortunes worth more than the total wealth of the poorest half of Americans? Is it not criminal that millions of factory jobs, which once allowed families to earn a living wage with health and retirement benefits, have been shipped to places like Monterrey, Mexico, where Mexican workers in GM plants earn $3 an hour without benefits? Is it not criminal that our families have been sacrificed to feed the mania for corporate profit, left to rot in violent and post-industrial wastelands such as Newark or Camden? Is it not criminal to harass and terrorize the poor on the streets of our cities for petty activities, such as selling loose cigarettes or "obstructing pedestrian traffic," which means standing too long on a sidewalk, while Bank of America, Citibank and Goldman Sachs have never been held accountable for trashing the global economy, wiping out 40 percent of the world's wealth through fraud? Is not criminal that, as poverty has gone up and crime has actually gone down, our prison population has more than doubled?

George Bernard Shaw got it right:

Poverty is "the worst of crimes. All the other crimes are virtues beside it; all the other dishonors are chivalry itself by comparison. Poverty blights whole cities, spreads horrible pestilences, strikes dead the very souls of all who come within sight, sound, or smell of it. What you call crime is nothing: a murder here and a theft there, a blow now and a curse then. What do they matter? They are only the accidents and illnesses of life; there are not 50 genuine professional criminals in London. But there are millions of poor people, abject people, dirty people, ill-fed, ill-clothed people. They poison us morally and physically; they kill the happiness of society; they force us to do away with our own liberties and to organize unnatural cruelties for fear they should rise against us and drag us down into their abyss. Only fools fear crime; we all fear poverty."

Related Topic(s): College; Crime; Integrity; Poverty; Suffering, Add Tags
Add to My Group(s)
Go To Commenting
The views expressed herein are the sole responsibility of the author and do not necessarily reflect those of this website or its editors.