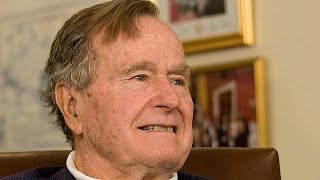 Think of an acquaintance of yours. Not someone you're particularly close to, just some guy in the cast of extras from the scenery of your life. Now, imagine learning that that guy is a serial murderer, who has been prowling the streets for years stabbing people to death. Imagine he goes his whole life without ever suffering any consequences for murdering all those people, and then when he dies, everyone wants to talk about how great he was and share heartwarming anecdotes about him. If you try to bring up the whole serial killing thing, people react with sputtering outrage that you would dare to speak ill of such a noble and wonderful person.

"Look, I didn't agree with everything he did, but you can't just let one not-so-great thing from a man's life eclipse all the other good things he's accomplished," they protest. "For example, did you know he was a baseball captain at Yale?"

"But... what about all those people he murdered?" you reply.

"God, why can't you just pay respect to a great man in our time of mourning??" they shout in exasperation.

George HW Bush systematically attacked the civilian infrastructure in Iraq. He turned hospitals into death rows for infants. He widely used depleted uranium, causing cancer rates to skyrocket. He made Iraq a mass graveyard. And the killing hasn't stopped since.

I remember feeling a deep sense of shame and anger when I visited the Amiriyah shelter in Iraq. George HW Bush killed more than 400 civilians huddled there on February 13, 1991. These are the crimes we should be discussing today.

It was George Bush Snr. who ordered the bombing of the "Highway of Death" in 1991. The death toll remains unknown. Robert Fisk, the journalist, said he "lost count of the Iraqi corpses crammed into the smoldering wreckage or slumped face down in the sand." pic.twitter.com/Fj8cnC4aAi

Thanks to George W Bush, birth defects in Fallujah, the Iraqi city he bombed with depleted uranium and white phosphorus, outstrip those in post-atom-bomb Hiroshima and Nagasaki. Remember this the next time you see media portray George W Bush as a lovable elder statesman. https://t.co/NbhwW7XH36

You turn on the TV, and it's nothing but nonstop hagiography and adulation for this guy who you know was a serial murderer. Pick up a newspaper and it's the same thing. On the rare occasions where they do mention his astonishingly high body count, they frame it as a good thing: he got the killing done quickly and efficiently. He helped our country get over its phobia of mass murder. Our streets sure are a lot cleaner without all those unwanted prostitutes and homeless people he butchered.

Related Topic(s): Death; Legacy; Mass Murder; People GHW Bush, Add Tags
Add to My Group(s)
Go To Commenting
The views expressed herein are the sole responsibility of the author and do not necessarily reflect those of this website or its editors.