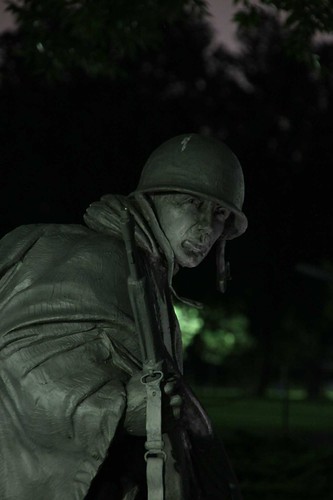 I've been touring around South Korea (ROK) since mid-October. For about 10 of those days I was with a group of US Korean War veterans. The ROK Ministry of Patriots and Veterans Affairs sponsors a Revisit Korea Program. They even pay for airfare and accommodations of organized groups to "express gratitude to Korean War veterans from 21 UN allied nations and build their pride by allowing them to witness how Korea enjoys peace and prosperity thanks to their noble sacrifices and dedication". As a veteran, I managed to "stowaway" with the group tour even though I was never stationed in Korea.

The ROK gives an honored status to the aging veterans that were in Korea during the 1950 to 1953 "United Nations Police Action" (i.e. Korean War). Those veterans that came after 1953 are included as "Peacekeepers" since the Korean War has never officially ended. All are honored as heroes and even give "Hero" lapel pins; along with a lot of pomp, ceremony and a "Thank You Banquet".

The ROK has a lot of military and economic self-interest in buttering up Yankees. They call it "reinforcing the alliance and pursuing cooperative partnership for the future". The hotel staff even had to line up and applauded the American vets upon their arrival. I was embarrassed for the staff, even if they weren't. It was a demeaning display.

Other Koreans see the Yankees as foreign interlopers. They blame the US for dividing Korea after 1945, denying them independence and meddling in Korea for the US's own self-interests. During the Korean civil war of the 1950's the US bombed Korea back to the Stone Age, and killed several million of their ancestors. They see the US as having blocked Korean independence and reunification for over 70 years.

After several days of formal "hero" events that included ceremonies, speeches, dinners and group photos, our veteran group toured Seoul, the DMZ, and Panmunjom, Incheon, Busan and many other locations. We went from one war memorial, POW camp, cemetery and all you can eat Korean buffets after another. We gazed at pine tree covered hills named Pork Chop, White Horse, T-Bone, Old Baldy, Bloody Ridge, Heartbreak Ridge, and Punchbowl.

Today those hills don't looked any different than the thousands of others in Korea. I certainly wouldn't die for any of them, but a lot of Americans were ordered to, and 54,246 did. In 2017-dollars the war cost was $600 billion, in addition to hundreds of billions of more dollars spent on the "peacekeeping mission", and military and financial aid to South Korea.

To pass the hours on the bus our American retired-military expat tour guide showed Korean War movies. One scene in the 1959 movie Pork Chop Hill has an African-American soldier saying, "I ain't gonna die for Korea, what do I care about this stinking hill?" The anti-war and historical pre-civil rights movement message is highly charged in that scene: firstly, the movie has many anti-war messages mixed in with the themes of duty, righteous patriotism and evil communism; secondly, the US Army was just starting to integrate during the Korean War and many white soldiers questioned the loyalty and courage of black soldiers. Gregory Peck, as Lieutenant Joe Clemons, runs roughshod over him so that he can join the "exclusive club" of white soldiers.

Whoosh!---all those anti-war messages from the 1950's went over the heads of most of the vets on the bus, as they would other US audiences today. Instead the vets related to the last line in the movie that, "Millions live in freedom today because of what they did". That 'thank you for your service' is total nonsense and propaganda.

Nobody is free today because US soldiers died on Pork Chop Hill. The hundreds killed on Pork Chop Hill were just negotiating pawns. Thousands of other Americans died as pawns fighting for other meaningless hills too, and that is the real message of the movie. As with Pork Chop, many of those hills are in the Iron Triangle Area above the 38th Parallel. Each side of the war was playing king on the mountain to jockey for an advantage in the 1953 armistice negotiations at Panmunjom.

A lot of lives could have been saved if the US had just agreed in 1951 to redraw the armistice line at the original dividing line at the 38th Parallel. Instead the US wanted to hold the Imjin valley area above the 38th because of its strategic position and to deny the North the fertile rice producing valley. After 2 years of haggling and 20,000 more US casualties the US agreed to a stalemate.

After the Korean War the US public went through an anti-war "Korean War Syndrome" similar to the "Vietnam War Syndrome" distaste for insane, genocidal and disastrous wars. Hollywood even put out movies such as Pork Chop Hill (see trailer) and "The Bridges at Toko-Ri" that had anti-war messages mixed in with the patriotism, duty to follow orders, esprit de corps and glory of combat required by the censors to get the Pentagon's blessing and money. In the 1970's the TV series M*A*S*H would use the Korean War setting for its anti-war message. Most viewers had already forgotten the US's agony, shame and war crimes during the Korean War, and the US was repeating them again in Vietnam.

Many veterans and the public cope with their cognitive dissonance by saying the Korean War was "worth it". They point to South Korea and they can't imagine how any Asian country could possibly become "prosperous and democratic, a miracle really" without the US first bombing it back to the Stone Age and killing millions of their people [irony inserted]. Americans must be among the most indoctrinated people in the world to believe the mythology that US wars are about freedom, democracy and human progress. Human progress and Korea would be a lot better off without US wars.

Related Topic(s): Anti-war; Korea; Korean Unification; Korean War; Veterans, Add Tags
Add to My Group(s)
Go To Commenting
The views expressed herein are the sole responsibility of the author and do not necessarily reflect those of this website or its editors.