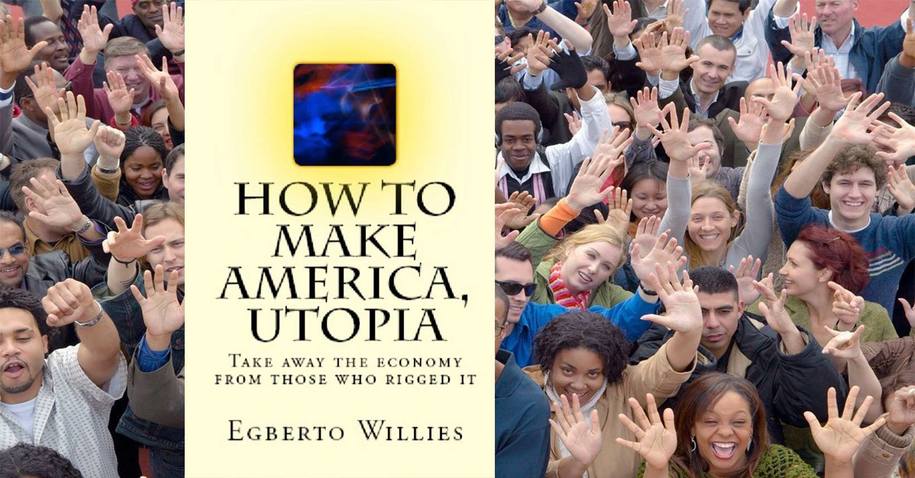 I am currently writing my third book, "How To Make America, Utopia: Take Away The Economy From Those Who Rigged It." The idea is a book that will explain things in an easy fashion. Below is an excerpt from Chapter 3 which I just completed.

Anyone who subscribes to my media/radio show Politics Done Right can read all my current and subsequent books online. As I write chapters I put them online. Do note that until the book goes to print there can be major changes online.

How To Make America Utopia: Take Away The Economy From Those Who Rigged It

Virtual laissez-faire is the order of the day in today's private sector. Virtually uncontrolled, it extracts without the wisdom of sustainability, humanity, or morality.

I appeared on a panel recently where we discussed the economy. The debate was about Donald Trump's tax cuts. A couple of us that thought what we needed was a tax increase, mostly on the wealthy, by a substantial amount. Why? The excesses of the past several decades transferred the wealth of the middle-class directly to the relatively few that owns capital.

There was a Conservative Republican on the panel. The first thing he asked was how was asking the wealthy to pay more going to affect business. He never asked how it would affect the wellbeing of the middle-class and the poor.

Of course, we pointed out that because the poor and the middle-class were strapped it would be great for the economy. After all, economic activity is measured by the velocity of money circulating. The money of the wealthy sitting in a bank or in stocks are not circulating many times over throughout the economy. So taxing the wealthy means more economic activity and which means the likelihood of more profit throughout. It is important to remember that being wealthy does not necessarily equate to logical thinking, just the ability to hoard at all cost.

He understood our argument but still felt better just holding on to all his money.

A strong and vibrant private sector is very important, but it must have rules to prevent the accumulation of capital that stifles others from partaking of it.

Our current economic system cedes most of the power to private corporations. Their fiduciary responsibility is not to employees or customers but to the shareholders, the owners of these companies.

Laws are even on the books that prevent government from certain types of regulations. In fact, in some instances, corporations can sue government for perceived lost profit if they deem a regulation hampers their business.

It is for that reason that certain parts of the economy must be in the public sector with everyone having equal access. It creates a level playing field that allows one to excel solely based on one's merit. How is this achieved?

Corporations do not like regulations. Why? It puts everyone on a level playing field. The individual does not have to sell their labor at a discount because if business won't pay and they have an idea that is plausible, the chains the corporations use to hold on to employees are no longer there, healthcare, etc.

We must make the rules that govern humane happy living first. We can then fit the business model to support our humane society.

Related Topic(s): America, Add Tags
Add to My Group(s)
Go To Commenting
The views expressed herein are the sole responsibility of the author and do not necessarily reflect those of this website or its editors.