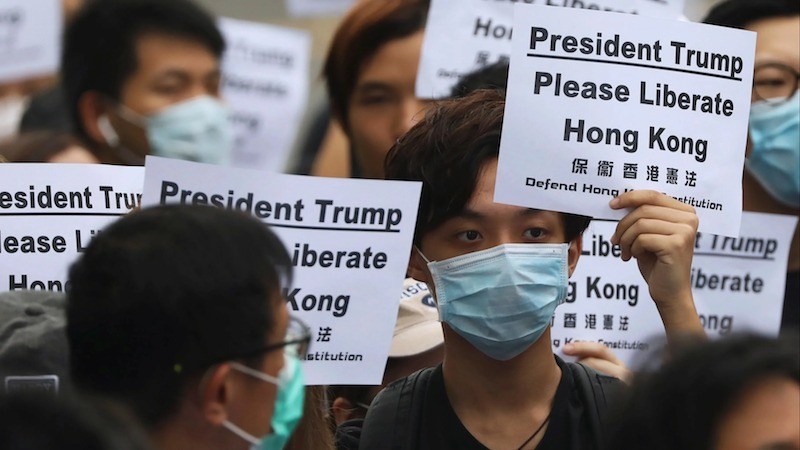 The Australian Broadcasting Corporation, our government-funded media outlet, has published an article titled "Australian expat living in Hong Kong throws off business suit to join protest movement". The entire story is in the headline: some random guy, who ABC keeps anonymous but for the name "Daniel", has joined the protests in Hong Kong. That's it. That's the whole entire bombshell newsworthy news story.

"In Australia we have proper democracy but in Hong Kong, democracy is being slowly eroded away and I'll try to do whatever I can to try and help the cause," the anonymous guy told ABC.

This sort of enthusiastic empty non-story cheerleading is typical for western media coverage of the Hong Kong protests so far, while these same media outlets consistently ignore or downplay protests against the government of France, Israel, Honduras, India, Indonesia and any other region that happens to fall within the US-centralized power alliance. It's an amazingly reliable pattern: the entire western political/media class finds protests and uprisings endlessly fascinating when they are in opposition to governments which haven't yet been absorbed into the imperial blob like China, Russia, Iran, Venezuela, Syria, pre-collapse Libya, or then-Moscow-aligned Ukraine, but any protests or uprisings within that empire are ignored at best or demonized at worst.

If dissidents in the United States began donning yellow vests and holding aggressive demonstrations in the current media environment, you could safely bet your bottom dollar that they would be ignored for as long as possible and then smeared as fascists, antisemites and/or Russian pawns thereafter. This would happen with absolute certainty. 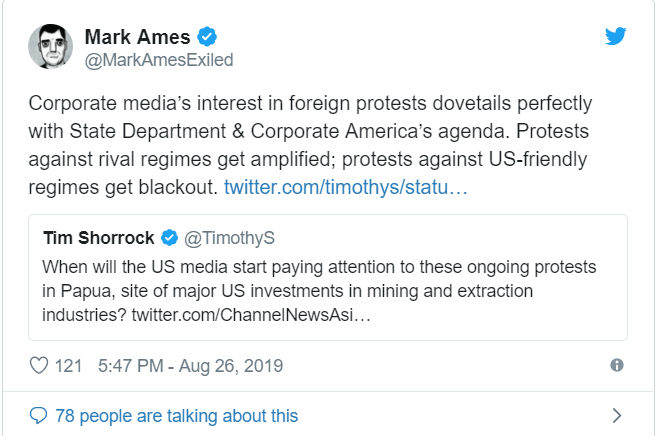 This very reliable trend in the western media is very interesting, because it also happens to be the known position of the US State Department.

"In the case of US allies such as Egypt, Saudi Arabia, and the Philippines, the Administration is fully justified in emphasizing good relations for a variety of important reasons, including counter-terrorism, and in honestly facing up to the difficult tradeoffs with regard to human rights," Hook explained in the memo.

"One useful guideline for a realistic and successful foreign policy is that allies should be treated differently - and better - than adversaries," Hook wrote. "Otherwise, we end up with more adversaries, and fewer allies. The classic dilemma of balancing ideals and interests is with regard to America's allies. In relation to our competitors, there is far less of a dilemma. We do not look to bolster America's adversaries overseas; we look to pressure, compete with, and outmaneuver them. For this reason, we should consider human rights as an important issue in regard to US relations with China, Russia, North Korea, and Iran."

Understand this one basic concept and you can understand all the hot topic foreign policy issues of any given day: there is an alliance of nations, centralized around US military and economic power, which effectively functions as a single empire. This empire works tirelessly to either absorb unabsorbed governments into its blob, or at least to undermine and marginalize them so they can't impede the empire's growth. The goal of the empire is total global domination without causing a nuclear war and without the public noticing that they're living in an empire. In this sense it's essentially a silent, slow motion third world war.

I see some of my readers voicing confusion about the protests in Hong Kong, but if you understand the basic dynamic I just described you'll see that this is really no different from the protests and uprisings we've seen in Venezuela, Iran, Syria, Libya and Ukraine: the western political/media class are backing an uprising which benefits the imperial blob and undermines an unabsorbed government. This doesn't mean that the protesters don't have grievances or that none of those grievances are legitimate, it just means that you're being told to cheerlead for an agenda by empire narrative managers solely because your doing so benefits that empire.

So don't. Refuse to be a pro bono CIA propagandist. This doesn't mean you need to oppose the protesters in Hong Kong, Venezuela or anywhere else, it just means that the only people who benefit from westerners cheerleading a CIA-approved uprising against an unabsorbed government are your rulers, who work endlessly to manufacture support for pro-empire agendas.

Related Topic(s): Foreign Policy Institute - Neocons, Add Tags
Add to My Group(s)
Go To Commenting
The views expressed herein are the sole responsibility of the author and do not necessarily reflect those of this website or its editors.