Trump's "shithole" moment was years in the making. 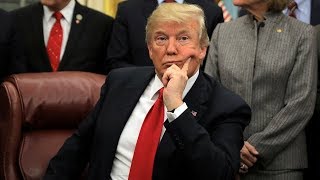 Once again, the political-media world is in a tizzy over a Donald Trump remark. In a White House meeting on Thursday, he...oh, you know what happened. "Shithole" -- he referred to African countries and possibly Haiti as "shithole countries." Yeah, Trump in a tweet -- half a day after the story broke -- denied it. But does anyone believe he didn't say that? News anchors -- notably CNN's Anderson Cooper and Don Lemon -- branded Trump a "racist." And, as could be predicted, a handful of hardly brave Republicans came forward with carefully calibrated wrist-slaps. Outgoing Sen. Jeff Flake (R-Ariz.) said, "The words used by the President, as related to me directly following the meeting by those in attendance, were not 'tough,' they were abhorrent and repulsive." And Sen. Marco Rubio (R-Fla.) pointed out that Haitian Americans "are serving in public office as members of both political parties." But as with many of Trump's excesses, GOP outrage was muted, at best. (Some media reports portrayed White House aides as even bragging about the "shithole" comment, braying it would play well with Trump's base.)

With the nation -- or at least, part of it -- trying to come to terms with this latest manifestation of Trump's vileness, it's a good time to remember a fundamental reality: Trump became racist-in-chief because Republicans and conservatives embraced him and normalized his racism-driven politics.

Trump has a long history of what Axios once politely called "racial controversies." Being sued for racial discrimination in his housing developments, inflaming racial tensions in New York City related to crime, and more. But he didn't hit the big time in racial politics until 2011, when Trump, who was then considering running for president in 2012, became the nation's No. 1 birther. For reasons that still remain unclear -- perhaps he was looking to win over conservatives -- he seized upon the already discredited conspiracy theory that President Barack Obama was born in Kenya. That would mean that the first African American president had not been eligible for the presidency and, consequently, was wrongfully in the White House, as the most illegal illegal alien of all time.

David Corn is  Mother Jones ' Washington bureau chief. For more of his stories,  click here . He's also  on  Twitter  and  Facebook .  RSS  |  TWITTER  David is (more...)
Related Topic(s): Racism; Republican Hypocrisy; Trump Cruelty; Trump Insults; Trump Racist, Add Tags
Add to My Group(s)
Go To Commenting
The views expressed herein are the sole responsibility of the author and do not necessarily reflect those of this website or its editors.