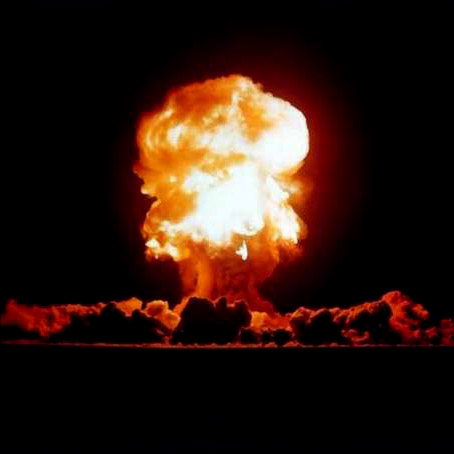 A limited nuclear war will go a long way towards brightening our future.
(Image by John Rachel, jdrachel.com)   Details   DMCA

There seems to be no limit to human ingenuity. And again man's creativity in confronting monumental challenges has come to the rescue.

A fascinating article published over twelve years ago in New Scientist, implies that a modest nuclear war would likely reverse the apocalyptic effects of severe global warming. Now experts aren't recommending a sizeable nuclear exchange, because that might go too far and actually throw us back into an Ice Age. Apparently, about 50 to 100 medium size nuclear bombs would do the trick.

Which happens to be about the number that Pakistan and India currently have in their nuclear arsenals.

What are we waiting for? Go to it, guys! Everyone knows there is tremendous untapped bad blood between these two countries. With a little nudging from our State Department, we should be able to keep Florida from turning into a fish farm and New York City taxi drivers into gondoliers.

Granted there may be a few drawbacks to the nuclear option. But I don't think this is the time to be nitpicking, considering the magnitude of the crisis we see looming ahead, with prospects of having to watch on the nightly news, herds of Komodo dragons causing traffic jams in Minneapolis, offensive footage of drowning polar bears, and unnerving reports of people's hair spontaneously combusting.

Sure, a few eggs might get broken. But that's how you make an omelet, right?

It's India and Pakistan, after all. So who cares?

Moreover, in the event that all of the radioactivity ends up making the surface of the Earth too inhospitable, we can always turn to Monsanto. It seems to me that with their expertise in genetic modification, it would be no problem to insert ground mole genes into human embryos in vivo, guaranteeing that our future generations would be perfectly adapted to burrowing and living underground for a millennium or two.