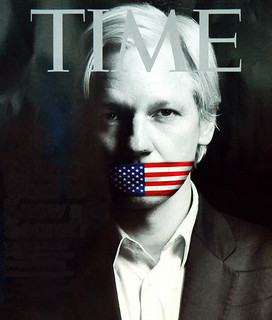 Congress shall make no law .... abridging the freedom of speech, or of the press...
(Image by gnuckx)   Details   DMCA
My last piece was the longest, most intensively-researched, article I've ever posted here. Called Give Peace A Chance, it contained a large number of links throughout in support of my various statements of fact.

Beyond some of the very eye-opening information I came across and cited in the piece itself, I had a startling epiphany.

Generally, I see noticeable differences in what is reported "out here" __ as you probably know, I'm an expat living in Japan __ and what I get from the American media. These are sometimes slight but unmistakable differences in content, but more often of emphasis, as the respective articles understandably are tailored for different audiences.

But this time my realization went far beyond that. I encountered what can only be deemed crude and blatant censorship, a glaring lack of any coverage of specific noteworthy events by any of the standard U.S. news outlets __ the ones most commonly used by Americans.

Sometimes I am accused of leaning too much on RT, the Russian news site. Personally I find it to be extremely valuable, mostly quite balanced, and a great source for a different take on world events. But since I sometimes get slammed by Russophobes for using that "damn Russkie propaganda rag", I typically try to mix in a lot of different sources when providing support for whatever point I'm trying to make.

What struck me was the number of articles related to the Ukraine crisis, the confrontation with Russia, the frenzy of military exercises throughout Europe, the escalation of the new Cold War stand-off between Russian and the West, and preparation for a possibly massive military conflict between NATO and Russia, which HAD NO COMPARABLE REPORTING in America's main stream media __ I mean nothing!

In other words, an item would be featured in RT, but Google produced no similar article in the American press.

There were numerous examples. But let me mention a few that stood out.

"Over 100 US armored vehicles roll into Latvia, NATO flexes muscles in Europe" was the headline in RT. No mention in the U.S. of what seems like a rather startling development.

You would expect an announcement like "US National Guard sends 12 F-15 interceptor jets to Europe to guard against Russia" to raise some eyebrows. Of course, since none of the major news programs __ at least none that I can find __ mentioned it, eyebrows got the day off.

A month after the Minsk II agreement struck by France, Germany, Russia and Ukraine, which specifically bars introduction from outside countries of material support and lethal weapons, we have "Poroshenko: 11 EU states struck deal with Ukraine to deliver weapons, including lethal", an ominous bit of treachery. While there is mention at an Iranian news site of Russian objections to this, and a link back to the RT article at Israel Foreign Affairs, discussion in major media forums is conspicuously lacking in the U.S. and Europe itself.

How about "US troops in Europe request bigger guns amid Russia anxieties", appearing April 25? Do Americans even know there are U.S. soldiers in countries right on Russia's border preparing for battle? They do only if they read the California Telegraph, a news outlet I never heard of before this.

Related Topic(s): American Exceptionalism; American Hypocrisy; CIA; Deception; Freedom; Freedom Of The Press; Freedoms; International; Journalism; Military; (more...) NSA; News_of_the_world; Other; People; Policy; Presstitutes; Time; Ukraine, Add Tags  (less...)
Add to My Group(s)
Go To Commenting
The views expressed herein are the sole responsibility of the author and do not necessarily reflect those of this website or its editors.