Ramin Mazaheri is the chief correspondent in Paris for Press TV and has lived in France since 2009. He has been a daily newspaper reporter in the US, and has reported from Iran, Cuba, Egypt, Tunisia, South Korea and elsewhere. He is the author of "I'll Ruin Everything You Are: Ending Western Propaganda on Red China." 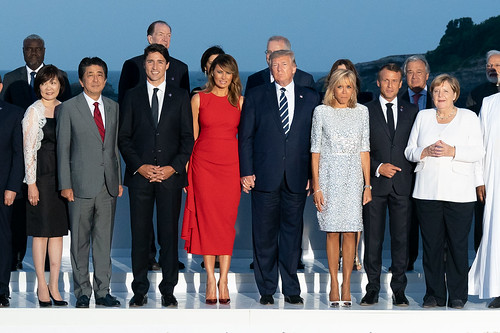 The power-shifting events of the summer - Iran downing a US drone , Iran sequestering a British-flagged ship , Iran proving itself as the new police of the Persian Gulf - show that Iran is not just willing to fight but is able to win. Indeed, why should water be any different? In recent years Iran has won on land in Syria, Iraq, Lebanon and elsewhere.

The latest G7 summit was held in Biarritz, France, and as PressTV's Paris correspondent I thought about heading down there" but it seemed like a waste of the Iranian taxpayer's money. What is the G7, after all? It began in 1975 to increase coordination between the neo-imperialist victors of World War II and their formerly fascist enemies, who reconciled with the goal of blocking the progress of socialist nations and increasing their dominance over non-aligned ones.

The G7 nations remain far more united than divided, despite the Mainstream Media's claims, and one simply has to look at the central bank collusion between these economies since the fall of Lehman Brothers for yet more proof. However, there is genuine (but moderate) disagreement on Iran.

After supporting 40 years of cold war on Iran, Europe is no longer as completely anti-Iranian as Washington. Another way of saying that is: "Europe is only rabidly Iranophobic and Islamophobic 16 hours a day instead of 24." Regardless, Iranian diplomats are paid to work and Foreign Minister Mohammad Javad Zarif did just that, surprisingly, at the summit.

Zarif spoke with French President Emmanuel Macron on Friday and then addressed multiple G7 leaders on Sunday. Zarif's landings in "the Hexagon", as France is rather unimaginatively referred to here, are a clear slap in the face to the US. In June some analysts pondered the possibility of mental illness among Western diplomats after Washington absurdly sanctioned Zarif" and then asked for talks. The safe passage of diplomats is an ancient, universal practice - without it, how can peace ever be arranged?

But America does not make the laws for the entire world, try though they might. Stressing this point was perhaps the key motivation behind Macron's hosting of Zarif. Macron would soon overstep his bounds, however.

I had little desire to see Biarritz - in lovely and rebellious Basque Country, and the very spot where California surfing first arrived to a stunned old continent in 1956 - on total lockdown: Amnesty International decried Macron's 13,000 cops who made sure their boss was not embarrassed by any pesky Yellow Vests. The continued and stunning violation of the human rights to freedom of assembly and free speech in France were dutifully relayed immediately by the Western Mainstream Media" for the far-right, nativist protests in Hong Kong, that is. This double-standard, and the false portrayal of the Yellow Vests as a right-wing movement, has gone on for nine months.

But when Zarif surprisingly landed at the usually boring G7 summit I certainly second-guessed my decision not to attend! Then what was even more newsworthy was Macron's announcement that a meeting between the US and Iran could happen "within weeks", even though one hasn't happened for 40 years. And me in Paris!

Fortunately, my newsroom bosses were not chewing me out but rolling their eyes at Macron's predictions. One expects Trump to seriously push wild ideas, but Macron? Yes: are the two inexperienced political outsiders and infamous egotists really that different?

It's true that France has been preoccupied with Iran since Gulf War II, which removed their biggest ally and trading partner in the region - Saddam Hussein. France sees Iran as a potential ally in a Middle East where US and UK neo-imperialism holds far more sway.

Related Topic(s): French Media; French President Macron, Add Tags
Add to My Group(s)
Go To Commenting
The views expressed herein are the sole responsibility of the author and do not necessarily reflect those of this website or its editors.