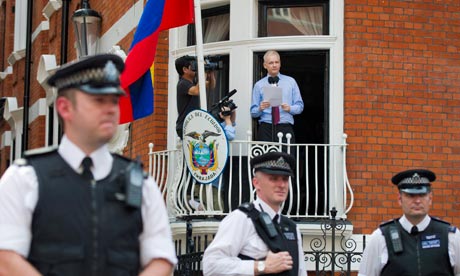 (Image by Unknown Owner)   Details   DMCA
Julian Assange has been holed up in the Ecuadorean embassy since June 2012. Photograph: Facundo Arrizabalaga/EPA

(1) The government of Ecuador continues its attempts to obtain assurances from either Britain or Sweden that Julian Assange's appearance in Stockholm for questioning on sex crimes allegations will not be used to extradite him to the US. This week, the Sydney Morning Herald reported on several interesting new developments in the case in Sweden, including the fact that the high-profile prosecutor driving the case from the start has now "abruptly" left it. Moreover, both Alexa O'Brien and Ryan Gallagher note that the Obama DOJ continues to say that its Grand Jury investigation of Assange and WikiLeaks is ongoing. Leaked documents from last year reflect that Australian diplomats believe the US is still intent on prosecuting WikiLeaks (a threatened prosecution which former New York Times General Counsel James Goodale recently described as "absolutely frightening" and "the biggest challenge" to press freedoms today).

(6) Following up on last week's column I wrote about the hunger strike at Guantanamo, the number of detainees participating still continues to grow. Relatedly, this Guardian article from this morning, on British troops recounting the grotesque torture that took place at a US detention facility in Iraq frequently visited by then-US Joint Special Operations Commander Gen. Stanley McChrystal, is really remarkable.

(7) In Washington state, legislation favored by the ACLU was recently introduced by a GOP state legislator, which attracted the support of numerous Democrats, to regulate the  use of domestic drones, including requiring a search warrant before they can be used to surveil individuals. But the aircraft manufacturer giant Boeing sprung into action, opposing the bill and causing the Democratic Speaker of the House to block a vote on the bill. Pratap Chatterjee has a great report on this here. The politics driving the efforts against the abuses of domestic drones are fascinating and will scramble the stale and traditional partisan categories, as these fights will pit the corporate drone lobby, the establishment politicians it owns from both parties, and bipartisan authoritarian apologists for police power against anti-establishment politicians from both parties along with civil libertarian and privacy groups.

(8) For those in New York: I'll be giving the keynote address to the annual event of the Council of American-Islamic Relations (CAIR) in New York, entitled "Upholding the Constitution," on Saturday, April 20; ticket and event information is here. Last month, I spoke at Hampshire College on radical executive power and US political and media culture; that was followed by a conversation on those topics with the writer and philosophy professor Falguni Sheth, as well as a vibrant Q-and-A session with the audience. That event can be viewed here:

Related Topic(s): Detention; Extradition; Politics; Wikileaks, Add Tags
Add to My Group(s)
Go To Commenting
The views expressed herein are the sole responsibility of the author and do not necessarily reflect those of this website or its editors.