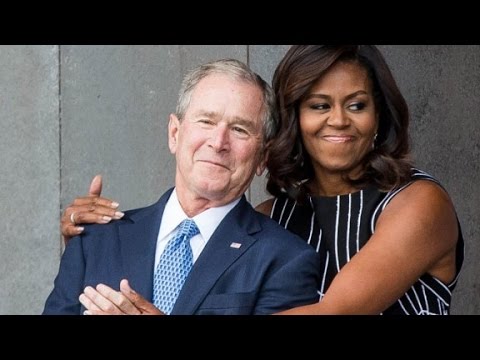 George W Bush is in the news again today, and once again it's not for the only legitimate reason that he should ever be in the news, namely a war crimes tribunal. No, it's because his voice was used in a cutesy feel-good video about unity during the Covid-19 pandemic.

"Let us remember how small our differences are in the face of this shared threat," Bush is heard saying. "We are not partisan combatants. We are human beings, equally vulnerable and equally wonderful in the sight of God."

And, needless to say, Democrats are all over social media orgasming in their pants about it.

"A REAL president," tweeted the other Alyssa Milano, Debra Messing.

"In a million years I never thought I'd be crying watching this, thinking how much better we'd all feel if Bush were president today," tweeted former Democratic congresswoman Katie Hill to thunderous online applause.

In a million years I never thought I'd be crying watching this, thinking how much better we'd all feel if Bush were president today. Wtf. https://t.co/SSR3ieZEFP

For years rank-and-file Democrats have been giving the true Butcher of Baghdad a majority approval rating, running with the common narrative that while Bush perhaps made some "mistakes," Trump is spectacularly worse. Here are five things that are highlighted by that common perspective:

1. It shows how little Democrats care about the lives of human beings overseas.

By the end of his first term Bush had launched two full-scale ground invasions, murdered a million Iraqis, destabilized an entire region in a way that would shortly give rise to ISIS, and ushered in a whole new level of unprecedented US military expansionism and imperialism. Trump has done none of these things. He has inflicted many evils upon our world and, like Obama, has continued and expanded the warmongering of his predecessors. But he has done nothing that rises to the level of depravity of Bush's wars.

The fact that Democrats see Trump's evils as not only equal to but far in excess of Bush's reveals as plain as day that, for all their supposed bleeding heart liberal sensibilities, they simply do not place much value on the lives of foreigners. Sure they might enjoy a little masturbatory melodrama over kids in cages when it shows up on their doorstep, but kids getting ripped to shreds by cluster bombs and being born severely disabled from depleted uranium munitions simply does not register for them, because they don't have to look at it.

Related Topic(s): Bush Admin; Bush Crimes; Democrats Conservative; Donald Trump; Iraqis; Rehabilitation; Republican, Add Tags
Add to My Group(s)
Go To Commenting
The views expressed herein are the sole responsibility of the author and do not necessarily reflect those of this website or its editors.