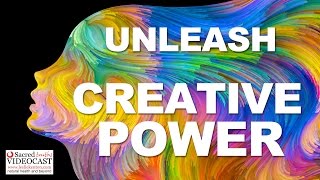 Every human being is brimming with creative power.
(Image by YouTube, Channel: Leslie Kenton)   Details   DMCA

The people who run society are engaged in bringing systems and structures into interlocking alignment, in order to create larger and larger machines of control.

I keep returning to this territory, because the whole thrust of modern civilization is making the individual extinct.

Powerless, badly educated, adrift in technology, viewed as a unit tied to a massive collective -- this is the picture of the individual.

The basic makeup of the State is promoted as a We. We want this. We need this. We deserve this. We all agree on this. The ubiquitous We is floated on purpose. The aim is to eradicate the I. The individual.

The State wants all arguments to center on what We should get. Should We be given this or that? Should We have A or B? What is best for We?

This is where all the trouble starts.

The State is not going to solve that trouble because it is creating it.

On the other hand, the individual who is free knows what he wants. Or can discover it. Sooner or later, he realizes that most of the people around him aren't free. Those people have embedded themselves so deeply in We that they can't see outside it. The very idea of being free is meaningless to them.

Ultimately, when all the bets are in, when all the chips are laid down on the table, the State's game is all about We. That's how the game is rigged.

The individual is ruled out.

The roulette wheel spins, but it doesn't matter which slot the ball falls into. No slot is labeled "individual."

And I'm not just talking about the State. Any large organization works in the same way.

Related Topic(s): Creative Power; Freedom; Individualism, Add Tags
Add to My Group(s)
Go To Commenting
The views expressed herein are the sole responsibility of the author and do not necessarily reflect those of this website or its editors.