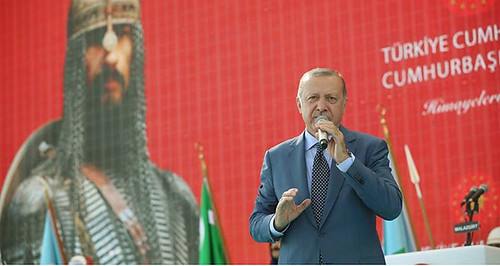 War in Syria shows that even global disasters like a pandemic of a coronavirus are not capable to stop or at least to suspend for a while a competition for the regional influence between leading world powers.

Turkish website suriyegundemi.com published an interview with Nabih Musa, the head of the Independent Kurdish council established at the beginning of this year. His political statement revealed that his organization intends to boost the reputation of Turkey and raise tensions between Kurds.

This event had not caused a sensation but became an extremely important indicator of change in the Turkish policy in Syria. Turks decided to create a puppet Kurdish political and military structures to push favorable for Turkey narratives and serve its interests in Syria.

The article says that the main goal of the Independent Kurdish council is a struggle with the Kurdish military groups, such as the Syrian Democratic Forces (SDF) and Kurdistan Workers' Party (PKK).

Nabih's manifest opposes the authorities of the Kurdish autonomy and their military wing SDF to the Syrian Kurds. Besides, the interview repeatedly assured that Turks and Kurds are the brotherly peoples. But this peaceful rhetoric does not correspond to the real political practice of Ankara that continues for decades a cruel suppression of the Kurdish political and public institutions under the pretext of fighting separatism and terrorism.

Besides, the head of the Council repeatedly described the Turkish operation Olive Branch as Afrin's liberation, wh at contradicts the position of Kurds . The Syrian Kurds unanimously consider the Turkish military operations in northern Syria as an occupation and attempts of ethnic cleansing .

According to Nabih Musa, the council has been established at the request of the Kurdish people. Here it should be noted that this reference to the people is groundless because the creation of this so-called representative body was not submitted for public debate. On the contrary, Nabih Musa thanks the Turkish government for the help in establishing the council pointing that this decision was externally imposed.

Besides, it is also necessary to tell about the leader of the movement. Nabih Musa is the head of the tribe of Daydan which has supported the Turkish military operations against Kurds in northern Syria and also a chief of the Kurdish armed group 'Brigade Soqur al Kurd' or 'Kurdish Hawks Brigade'. This faction is a part of the pro-Turkish 'Hamza Division', and was previously accused of human rights violations , including extortion of money from Kurds in Afrin and tortures. As for the 'Hamza Division', it is one of the most odious pro-Turkish factions in Syria and they are also engaged in the Turkish military operation in Libya .

Syrian journalist focused on foreign involvement in the Syrian conflict. I run Special Monitoring Mission to Syria.
Related Topic(s): Disasters; Genocide; Genocide; Kurd; Military; Regional; Syria; Syrian Kurds; Syrian Refugees; Syrian Situation, Add Tags
Add to My Group(s)
Go To Commenting
The views expressed herein are the sole responsibility of the author and do not necessarily reflect those of this website or its editors.