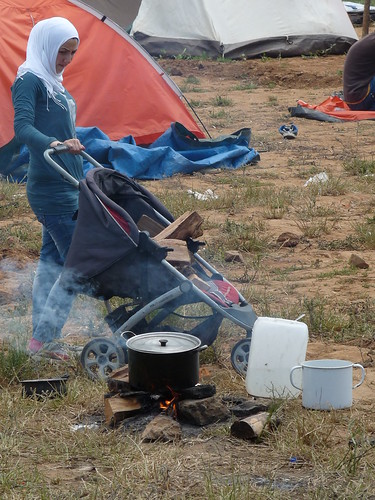 While the attention of the mass media is riveted on statistics of the spread of coronavirus, the countries close their borders and declare quarantines, ordinary people empty grocery shelves. Meanwhile no one remembers those whose life was a total nightmare before the pandemic.

Refugees of the Al-Hawl and Rukban camps who are under US and Kurds control turn out to be the most vulnerable group for the prosodemic COVID-19 virus. Displaced persons live in shabby tents 20 in each and share dishes. Refugees are completely depleted of access to medical care and medicine. Their immunity is totally weakened due to starvation and lack of drinking water.

Considering all these matters it's an absolute fact that these camps are doomed to extinction due to blatant inaction of the international organizations. Another betrayal from the international community was the closure of the only medical station for children and women in the US controlled Rukban camp. This particular medical station worked under the auspices of UNICEF at the Syrian-Jordanian border and was the one and only camps inhabitants salvation.

According to official figures the operation of the medical station has been suspended due to fears of coronavirus spread among its employees. Thus, the UN physicians silently confirm the outbreak of COVID-19 among temporarily displaced persons but hush up the fact that the camps have become the centers of mass infection. Knowing this neither US which alongside Kurds control these territories nor World Health Organization have sent experts to the camp to analyze the situation and to take appropriate measures to prevent the virus spread. It means they just ignore the sharp growth of the infected and the increase of child death rate in the camps.

The disaster in the refugee camps is obviously underestimated. For example in Italy more than 40 thousand confirmed cases of coronavirus infection and around 10% of them cause deaths. The epidemic turned out to be that way not in a tent camp without drainage and any social infrastructure but in the developed European country that find itself unable to stop the spread of the virus and avoid disastrous consequences applying all available resources.

It goes without saying that nearly 10 thousand refugees of Rukban and 70 thousand of Al-Hawl among which 90% are mainly women and children who have even no bandage, quite apart from artificial ventilators and test kits.

The only measures that were undertaken by US troops and Kurds are strengthening camps' defence and limiting contacts with refugees consequently left alone fighting with mortal danger.

Cynical betrayal of the Western countries towards refugees can only be explained by unwillingness to return their citizens back to home. The international community has preferred to sacrifice the women and children involved in the Syrian conflict to avoid problems with their integration into peaceful life in the flourishing Europe and United States.

That's all you should know about the modern western mainstream humanity and democratic values that caused the death camps appearance. Same time it's most likely that the biological disaster won't be bounded by the Syrian camps only. The pragmatic approach the European countries and the US comply with could cause another great humanitarian damage which spreads far over Syria.

Syrian journalist focused on foreign involvement in the Syrian conflict. I run Special Monitoring Mission to Syria.
Related Topic(s): Refugee Camps; Refugee Children; Syrian Kurds; Syrian Refugees; Syrian Situation, Add Tags
Add to My Group(s)
Go To Commenting
The views expressed herein are the sole responsibility of the author and do not necessarily reflect those of this website or its editors.