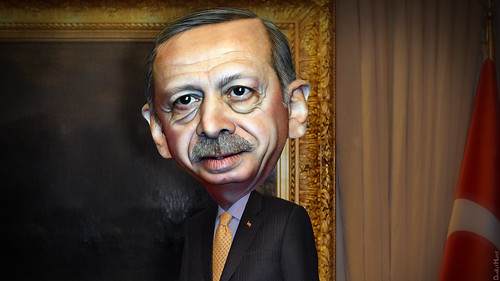 A rapid growth of tensions in Syria's North has brought mourning and grief to Turkey: only according to official Ankara's estimates 33 Turkey's servicemen became victims of airstrikes, while social media reports more than 65 persons. This telling blow has brought a storm to Turkish citizens' ears, and reflects the expected results of Turkish leader's incoherent policy. Erdogan has been insistently antagonizing the international community, while losing allies and making new enemies.

The Turkish president apparently has kind of a messiah complex and interferes in the internal affairs of neighboring states without any scruples, reminding them of the worst times of Ottoman domination. Erdogan's inflated hopes of rekindling the former Ottoman Empire is what is determining Turkey's foreign policy, and he is acting against Ankara's national interests and common sense.

First of all, Erdogan got on the wrong side of Arab co-religionists. With the beginning of the Arab Spring the Turkish leader started trying to overthrow the governments in the Arab countries, and appointing proxy Islamist regimes. The Egyptians were the main victims of Erdogan's betrayal. He supported and coordinated the activity of radical Islamist opposition, which overthrew President Hosni Mubarak, and replaced him with a fanatic Islamist, Mohammed Morsi. The true patriots in the ranks of the Egyptian Armed Forces retrieved the country from the Dark Ages, removed from power the Turkish puppet and gave the power to Marshal Abdel Fattah el-Sisi.

Another of Erdogan's tricks which caused a negative reaction of Arab leaders was his interference in the Libyan conflict and support of the "Muslim-Brotherhood", which seized power in Tripoli. In this context the "Arab Quad" which includes the Kingdom of Saudi Arabia, the United Arab Emirates, the Arab Republic of Egypt and Bahrain, began to pile on the pressure on Turkey by resisting its aggressive foreign policy. The common response of Muslim countries on Turkey's selfish policy was the catastrophic decline of Ankara's influence in the Organization of Islamic Cooperation and the full-scale crash of Erdogan's plan to become a leader of the Islamic world.

Erdogan's actions in Libya dissatisfied not only the Arabs but Europe too. Turkey's support of pro-Sarraj forces continues to instigate new waves of refugees flowing into European countries. Meanwhile Libya's United Nations-recognised government (GNA) maritime boundary demarcation agreement with Ankara, which was signed by Erdogan and his Tripoli's proxy, has also riled the heads of European countries. The Turkish-Libyan deal has caused a serious problem for the exploitation of gas fields off shore of Cyprus, and the building of Israeli East-Med pipeline. Thus, Erdogan's support of Islamists in the Gaza Strip and his rude disregard for the economic interests of Israel has broken Turkey's long-term alliance with Tel Aviv. Israeli intelligence officials have listed Turkey with the list of counties with an aggressive policy. This guarantees the growth of the attention to Turkey of Israeli special agencies.

Erdogan has made Turkey into an untrustworthy partner with the European Union. It also makes it impossible to dream of Turkey joining the EU. The European countries will remember the rude Turkish behavior of blackmailing them with a flow of refugees. All the promises of friendship and solidarity will become the symbol of Turkish hypocrisy and devilry.

Finally, the USA have also experienced Erdogan's fickleness. The Turkish leader managed to quarrel with his main NATO ally by accusing the US with an attempted coup, and then he attacked the US-backed Syrian Kurds. To add further insult he purchased Russia's S-400 missiles. The latest move forced the USA to impose sanctions on Ankara and exclude Turkey from the program of purchasing the US-made F-35 jets. Washington's response has sensibly inflicted a strike against the Turkish economy with the falling of the Turkish lira, reducing the level of life of Turkish citizens. Erdogan's policy resulted in Washington's refusal to support the Turkish offensive in Syria despite the verbal agreement.

Having quarreled with the West and neighboring Arabs, Erdogan could strike up a friendship with neither Iran nor with Russia. Despite the air defense deal and common economic interests in building the pipelines, Ankara and Moscow were close to war when Turkey shot down Russian aircraft in Syria in 2015. The murder of the Russian ambassador in the Turkish capital became a new strike at the relations between the two countries. Today, despite a number of bilateral meetings and Kremlin's readiness to accommodate the interests of Ankara, it seems that Erdogan is loosing the confidence of his Northern neighbor and is close to the scuttling of the "Eurasian project" which could help to strengthen relations with the post-Soviet countries of Central Asia and China.

Syrian journalist focused on foreign involvement in the Syrian conflict. I run Special Monitoring Mission to Syria.
Related Topic(s): Policy; Syria; Turkeys, Add Tags
Add to My Group(s)
Go To Commenting
The views expressed herein are the sole responsibility of the author and do not necessarily reflect those of this website or its editors.