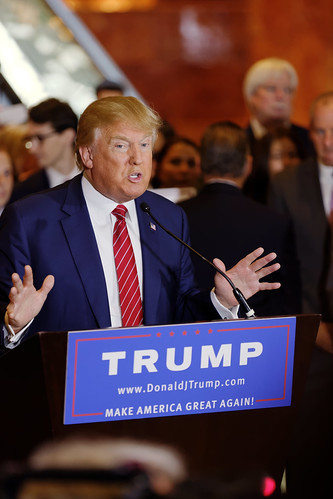 Let Donald Trump be Trump.
(Image by Michael Vadon)   Details   DMCA
Trump is a bloviating, chronically lying, ignorant buffoon. His time as president has made it clear that the only way he could have become a billionaire was through corruption and fraud. No wonder he has been a serial bankrupt.

But I don't believe all this talk of impeachment has been thought through. While I detest Trump and hate what he's done, in terms of appointing people set on destroying ecological, educational, worker and social justice protections, policies and laws, I think we need to hold off on impeachment.

First, talk all you want about it. It's become clear that the Republican controlled House of Representatives, where the first stage of impeachment would take place, is not even able to censure Trump's offensive actions, statements and tweets, let alone reach a majority vote on impeachment.

But as a left of liberal progressive, I think it's best to let Trump have all the leash he needs to hang himself and the Republican party. Every time Trump says or does something shameful and the vast majority of Republicans let him slide, their brand is damage more. That's why it's crazy to try to get his Twitter account closed. It is an outlet for his childish, nasty impulsivity. Trump is the best weapon against Republicans, right wingers and their brand and reputation that the world has seen in a century.

I oppose impeachment so much that I would, if I had a Democratic representative for my district, call his office to tell him not to impeach... yet. If it happened soon, Mike Pence would become president and he might settle enough ruffled feathers to diminish the damage to the Republican brand before the 2018 elections.

I do have some fears, that Trump could hit the nuclear trigger or start a war. But Pence could be just as warlike and probably diabolically smarter in terms of implementing right wing agenda change.

Another 17 months of Republican control of the House, Senate and White House, with the same level of failure, incompetence and disgusting, outrageous tolerance for bad behavior will do wonders for the future of progressive visions. Of course, the Democratic Party might very well blow it, with their idiot Hillbot spokespeople attacking progressives as "alt-left."

I'm enjoying seeing Trump self-implode. I am still holding on to an infinitesimally small hope that Trump might find his Trumpiness and throw off all the politicians who have cocooned him. as I described in my article, the other day, Dear Donald; Here's How to Get the Love and Respect You Want.

Come January 2019, things will be different. Maybe then, it will be time to impeach. Even then, though, there's a decent chance that the Democrats will take back the house and senate, hopefully with some decent new progressives included. That could lead to investigations that put enough heat on Trump's billionaire appointees so they quit, at which point Trump will no longer have a GOP rubber stamp to get replacement appointees approved.

Oh, and if you are still hanging on to the hope that Trump will stand up to the deep state and follow through on his election promises-- good luck. I believe he's shown he is neither able nor willing to do it, and probably never was .

On the other hand, if Trump does something really dangerously inappropriate, it might be necessary to exercise the 25th amendment, which I've written about here: Use the 25th to Stop Trump's Trigger Finger.

Related Topic(s): Impeach; Impeach Trump, Add Tags
Add to My Group(s)
Go To Commenting
The views expressed herein are the sole responsibility of the author and do not necessarily reflect those of this website or its editors.