Disentangling Ukraine from Our "Narrative Lines":

a Zen Moment for Our Droned Psyches!

"Blessed are the peacemakers: for they shall be called the children of God."

(from "The Sermon on the Mount")

Towards the door we never opened/ Into the rose-garden."

"" all that is seething below is an ever-present potentiality of consciousness." 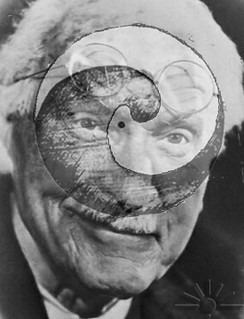 About 20 months ago, I accompanied my Japanese wife on a business trip she made to Kiev. My interests were touristic and a bit genealogical. My mother's parents were Ukrainian Jews who had emigrated from Kiev to Brooklyn, New York around 1919. (Her mother had died before I was born and my grandfather, one of the quietest and gentlest people I've ever known, passed when I was 14, with never a meaningful verbal conversation between us, not counting spirit-talks.... I was glad to be raised in a secular home, respectful of different religious traditions, without any impositions from my mother or my Sicilian-Catholic father; free to find my own way.)

It was my first trip to Kiev, and somehow I felt "at home." It is (or was then) a splendid city of many parks and golden-domed, Eastern Orthodox churches. I fell in love with three different women--and that was in the first 10 minutes, while checking in at our hotel (praise beauty and nobility of spirit wherever it is found!). Applying my usual dictum--learn the essentials of a language and use them as soon as possible--I would say "thank you" in Russian (spasibo--easy!) or Ukrainian (dyakuyu--not so easy!). Invariably, Ukrainians were happy to hear me sputter either one.

Gary Corseri has published & posted his work at hundreds of venues worldwide, including Op Ed News, The New York Times, CounterPunch, CommonDreams, DissidentVoice, L.A. (and Hollywood--) Progressive. He has been a professor in the US & Japan, has (more...)
Related Topic(s): Consciousness; History; History; Lies; Other; Truth; Ukraine, Add Tags
Add to My Group(s)
Go To Commenting
The views expressed herein are the sole responsibility of the author and do not necessarily reflect those of this website or its editors.