"The ink of the scholar is holier than the blood of the martyr."

(Attributed to--) The Prophet Mohammad (quoted at the BraveNewWorld.in/ site)

America has now degenerated into a nation that cannot walk and chew gum at the same time!

This has become painfully clear as, suffering from collective ADHD, we have focused our attention from the Newtown massacre, to the manufactured "Fiscal Debt Crisis," to Lance Armstrong's confessions, to NRA and Fox News harangues about a deliberately tortured reading of the 2nd Amendment, to France's bombing of Mali, to a hostage crisis in Algeria, to Manti Teo's non-existent girlfriend, veering to the all-important question of whether Beyonce lip-synced that War of 1812 paean to a flag.   Is it any wonder that, in this flood of distorted news and non-news, the average man or woman loses his/her mojo?

We've lost the "narrative line" and cannot keep more than one plate spinning at a time!   There are so many "narratives" spewed in the commentariat, generic Justin and Taylor can't punch their way out of a paper syllogism--can't get from A to C, without swiveling hips around W, L and P and winding up at O (that's zero, btw!).

As I watched the recent run-up to, and spill-over of, the "Fiscal Cliff," my mind kept returning to a tale I'd read in a book by the Pakistani writer, Idries Shah, some forty years ago.   The story goes something like this: 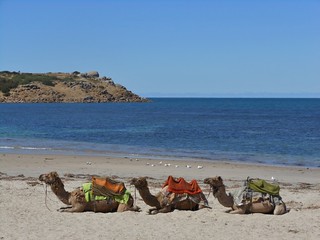 Upon his death, a wealthy caravan trader has bequeathed to his three sons his hard-working camels.   The eldest is to receive half of the bequest; the next oldest 1/3; and the youngest, 1/9.   The problem is that there are 17 camels in all.   The sons are befuddled.   They go to the wise professor at the university who tells them that their father must have meant camel meat!   If the camels are slaughtered, the meat can be distributed according to their father's wishes.   (The meat can be preserved, and it will feed their families and can be bartered for other goods!)

But, this is an unsatisfactory solution.   The sons' father was a gentle man who would never have sanctioned slaughtering his faithful animals.   Besides, camel meat is not that tasty!

The sons consult a soothsayer who tells them that all the camels should be sold, and the money distributed according to the father's formula.   This is more satisfactory, but their father had often expressed his wish that his sons would continue the family business.

Other wise men and women offer solutions, but all of them prove untenable.   Finally, the sons make their way to the strange man who keeps to himself, makes his own way in the world, but somehow exudes an aura of kindness and wisdom.   They sit in his humble hut, smoke a hookah [okay--that's my innovation!], eat some hummus on pita   bread" and the man solves their problem.

When I remembered this tale, I related it to my own best friend, "Woof"--my genius, psychic, telepathic border collie.   Woof was in my backyard, burying a bone when I hailed him later that day.   "I've solved the American debt crisis!" I told him.   "We don't need to cut a single social program.   We just need to re-direct our thinking!"

"Easier said than done," Woof assured me, with his eyes, settling back on his haunches, cocking his head with curiosity.   "And what kind of byzantine re-directing will this entail?" he queried.   "Shall I think Borges" or Brecht?"

"Neither. " Or, both. " Or, think Sufi. "it's all about giving something away" which will come back to us anyway.   Maybe in a different form.   Everybody wins!"

"Wrong premise, already," Woof telepathed.   "The rich and powerful don't want everyone to win.   They want most people to lose so that they remain exceptional--being rich and powerful!   But, still listening," he assured me again.

Gary Corseri has published & posted his work at hundreds of venues worldwide, including Op Ed News, The New York Times, CounterPunch, CommonDreams, DissidentVoice, L.A. (and Hollywood--) Progressive. He has been a professor in the US & Japan, has (more...)
Related Topic(s): Brokeness; Drama; Health PTSD; Military; People; People; Plato; Power; Socrates; Story; (more...) Sufism; Thinking, Add Tags  (less...)
Add to My Group(s)
Go To Commenting
The views expressed herein are the sole responsibility of the author and do not necessarily reflect those of this website or its editors.