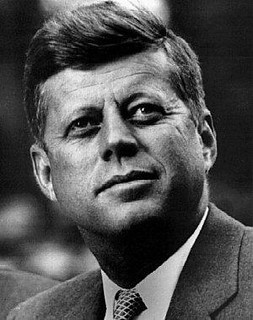 51 years after the event, circumstances had conspired so, I found myself in the political capital of the Global Empire, walking beside an infantry of weeping willows, and,--across Rock Creek Parkway and a sliver of greensward--the meandering Potomac. Between the columns of willows, a fountain of youth--or hope--or tears; all monumentally framed in white by the insistently "modern," straight-edged, perpendicular Kennedy Center, with his words inscribed thereon as on stone tablets:

"I look forward to an America which will not be afraid of grace and beauty." And, on the same "window" to that era: "I am certain that, after the dust of centuries has passed over our cities, we too will be remembered not for victories or defeats in battle or in politics, but for our contribution to the human spirit."

And, on another "window," a few paces away:

These words (and others to come later here) were gleaned from speeches delivered on various occasions and in different venues during his meteoric life and death. His words move me as much as anything Lincoln wrote in the Gettysburg Address, and I wish they were as highly recommended to our high-school students. Lincoln's speech commemorated--"consecrated," however inadequately--the losses in the endless human struggle for "liberty"--and how that liberty is "conceived." In the eclat of his "New Frontier," Kennedy looked beyond "the dust of centuries" to ponder America's "contribution to the human spirit." What other American president or elected (sanctioned!) political leader has conjoined the past titans of public life, Pericles, the Medici's, Elizabeth, with those who strode beside them to sculpt, paint and script the Age? Kennedy did not live long enough to fill the assigned role of Commander-in-Chief. Perhaps he ascribed to himself a greater role: that of Teacher-in-Chief.

Early in the history of what witty Ben Franklin called "a Republic" if you can keep it!"--a couple of decades after the signing of that iconic (though slave-sweat-stained) "Declaration," former presidents Jefferson and John Adams were already dreaming ahead, as their correspondence shows, of the coming glories of the new American "empire." Nowhere in any Kennedy speech do I see that manic, imperial word! Rather, he points us to our higher selves--much as his contemporary, a man he helped support and elevate in the public sphere, Martin Luther King. While King believed we could reach "the Promised Land" by rigorous adherence to our best principles, our ethical foundations in Scripture, Kennedy emphasized the discipline and cultivation of the Arts.

What have we not lost since then?

Let me not mislead. Jack Kennedy was a Cold Warrior. He clouted Nixon in the debates not only with his charisma and Nixon's sweaty chin, but with his constant harping on the dangers of the fairly apocryphal US "missile gap" with the USSR. He harped as well on China's shelling of Quemoy-Matsu--islands claimed by Taiwan--while the US tightened the noose around China with SEATO. He won the election because the US was tired of eight years of Eisenhower's grandfatherly paternalism. We sought energy, smarts, humor, myth and pizzazz. We wanted Camelot!

I think he learned in office. After the Bay of Pigs' fiasco, he said he wanted to shred the CIA--which, he felt, had grievously misled him--into a million pieces. He quarreled with the Joint Chiefs of Staff. During a strike against US Steel, he made an off-the-cuff remark--which I read in the New York Times!--that his father had told him businessmen could be sons of bitches! (He may have been born into privilege and power, but he risked his life for his working-class shipmates on PT-109.)

He intervened in--and salved, if not solved--Civil Rights-integration crises in Mississippi, Alabama and Arkansas. He increased the number of US "advisors"--troops--in Vietnam, but shortly before his death, he announced to America's most respected news-anchorman, Walter Cronkite, that he intended to withdraw from Vietnam. Six months before his assassination, Kennedy, who had committed his Administration to the non-proliferation of nuclear weapons, wrote Israeli PM David Ben-Gurion about his upcoming visit to Israel's nuclear reactor in Dimona: "We are concerned with the disturbing effects on world stability which would accompany the development of a nuclear weapons capability by Israel"" He was not a man to pull his punches! Could he have ended the Cold War two decades before Gorbachev (mostly) and Reagan? God only knows!

But, we do know this: he inspired as no political leader has since then. He was elegant in thought and demeanor. He made it acceptable, even "cool," to be educated, learned, literate and erudite. He had a honed sense of irony, and could be funny.

Gary Corseri has published & posted his work at hundreds of venues worldwide, including Op Ed News, The New York Times, CounterPunch, CommonDreams, DissidentVoice, L.A. (and Hollywood--) Progressive. He has been a professor in the US & Japan, has (more...)
Related Topic(s): America; Artists; Arts; Assassination; Civilization; Culture; Democracy; Empire; Hope Hopefulness; John F Kennedy; (more...) Kennedy Assassination; Poetry; Politics; Power; Spirit; Surveillance, Add Tags  (less...)
Add to My Group(s)
Go To Commenting
The views expressed herein are the sole responsibility of the author and do not necessarily reflect those of this website or its editors.