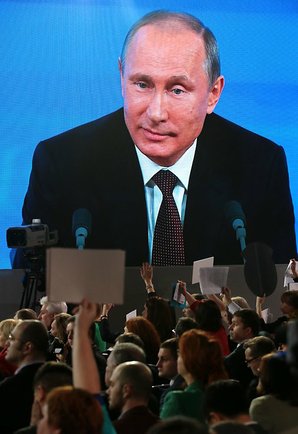 Vladimir Putin and media
(Image by (From Wikimedia) Presidential Press and Information Office of Russia. / eng.kremlin.ru/photo/2263?page=1, Author: See Source)   Details   Source   DMCA
>
Thousands of Iranian soldiers have arrived in Syria to join a major offensive against Sunni militants located in the northwest section of the country. The Iranian ground forces will be part of a joint operation that will include the Syrian Arab Army (SAA), Russia and fighters from Lebanese militia, Hezbollah. The assault comes on the heels of a withering two-week aerial bombardment of enemy positions by the Russian Air Force which has wreaked havoc on US-backed jihadis along the western corridor. The mobilization of Iranian troops indicates that the 4 year-long conflict is entering its final phase where the Russian-led coalition will attempt to crush the predominantly-Sunni militias and restore security across the country.

Currently, the fiercest fighting is taking place in three areas that are critical for Syrian President Bashar al Assad's survival: The Rastan enclave, the North Hama salient, and the Ghab plain. While Assad's forces are expected to overpower the jihadis at all three sites, the militants are dug in and have destroyed a number of armored vehicles and tanks. The regime must seize this area in order to control the M5 highway which runs north to south and connects the cities that create an integrated state. Once these enemy strongholds are broken into smaller pockets of resistance, coalition forces will move further north to close the borders with Turkey while attempting to recapture the strategic city of Aleppo. (See: Sic Semper Tyrannis for an excellent breakdown of the ground offensive with maps.)

According to military analyst Patrick Bahzad: "Overall, the outcome of the current operations in the three areas mentioned above is clear. Whether the various rebel groups have thrown everything they got into these battles is hard to say, therefore no assessment can be made as to how their fighting capabilities will be affected by the coming defeat.

"It is also worth mentioning that once SAA units have managed to break through rebel defences... this might cause a disorganised retreat of the trapped rebel units. That moment of the battle could be crucial, as it might be the starting point to a massive artillery barrage (MRLs) and large RuAF airstrikes, resulting in crippling casualties among rebel ranks." (Sic Semper Tyrannis)

In other words, there's a good chance that the jihadis will realize that they have no chance of winning and will head for the exits, but it's still too early to say when that will be.

According to a report in Reuters, "...a large mobilization of the Syrian army " elite Hezbollah fighters, and thousands of Iranians" are moving northwards to retake Aleppo. However, ISIS militants are also headed towards the city from the east which means that a major clash could take place at anytime. In response, the Russian air force has increased its bombing raids to more than 100 sorties per day. That number is expected to double in the days ahead as the fighting intensifies.

According to early reports from Syria Direct, the Syrian army has enclosed Aleppo in an open-fist configuration that cuts off the main artery of vital supplies to the north from Turkey. As the fist tightens around the city, US-backed rebel units have fled to the west, which is now the only possible escape route. The panicky retreat has precipitated protests against rebel leaders who are blamed for losses on the battlefield and for allowing "the regime's disastrous completion of the Aleppo siege." One of the militia's commanders summarized his frustration saying:

"The myriad brigades under al-Jabha a-Shamiya's umbrella in northeast Aleppo are bleeding men and hardware across multiple fronts...They're caught between regime forces to the south, and IS to the north....(Due to) the complete lack of coordination between each brigade, and not nearly enough guns and cash from the Americans to compete with the much-better equipped Islamic State, and they had no choice but to retreat." ("Jabha Shamiya commander blames 'complete lack of coordination' for Aleppo losses," Syria Direct)

Aleppo is a key node in Moscow's strategy to defeat terrorism and reestablish order across Syria. The battle is bound to be hard-fought, possibly involving close-range, house-to-house urban warfare. This is why it is imperative that coalition forces seal the border from Turkey and stop the flow of arms and supplies as soon as possible. There are rumors that Putin will use Russia's elite paratroopers north of Aleppo for that very mission, but so far, they are just rumors. Putin has repeatedly said that he will not allow Russian ground troops to fight in Syria.

There's no way to overstate the Obama administration's destructive and nihilistic role in Syria. Along with its Gulf allies, the US has funded, armed and trained the bulk of the jihadi hoodlums that have ripped the state apart and killed nearly one quarter of a million people. Now that Putin has decided to put an end to Washington's savage proxy war, the administration is planning to add more fuel to the fire by air-dropping pallets of ammunition and weapons to their fighters in central and eastern Syria. The editors of the New York Times derided the program as "hallucinatory." Here's an excerpt from the article:

"...the White House on Friday unveiled a plan that is even more incoherent and fraught with risk.

"The Pentagon will stop putting rebel fighters through training in neighboring countries, a program that was designed to ensure that fighters were properly vetted before they could get their hands on American weapons and ammunition. The new plan will simply funnel weapons through rebel leaders who are already in the fight and appear to be making some headway....

"Washington's experience in Syria and other recent wars shows that proxy fighters are usually fickle and that weapons thrust into a war with no real oversight often end up having disastrous effects....The initial plan was dubious. The new one is hallucinatory." ("An Incoherent Syria War Strategy," New York Times editorial Board)

The administration has also delivered "27 container loads of weaponry to the (Syrian) Kurdish Democratic Union Party (PYD)" and its military wing, the People's Protection Units (YPG). The weapons are supposed to be used against ISIS, but the move has infuriated Turkish president Erdogan who regards the group as terrorists. While it appears that the Obama team is merely looking for ways to show its critics that it is being proactive in its fight against terrorism, it may have created the perfect pretext for a Turkish invasion into N Syria which would greatly complicate the situation on the ground. Here's a clip from the Turkish Daily Hurriyet:

"Findings in the aftermath of deadly explosions in Ankara on Oct. 10 targeting pro-Kurdish and leftist activists indicate the Kurdistan Workers' Party (PKK), as well as the Islamic State of Iraq and the Levant (ISIL), may be involved, Turkish Prime Minister Ahmet Davutoğlu said on Wednesday.

"'As we deepen the investigation, based on the [information obtained about] Twitter accounts and IP addresses, there is a high possibility that Daesh [Arabic name for ISIL] and the PKK have played an effective role in the bombing,' he said while speaking at a press conference with Bulgarian Prime Minister Boyko Borisov in Istanbul." ("Turkish PM says both ISIL and PKK may have role in Ankara bombing," Hurriyet)

Related Topic(s): Bashar Al-assad; Intervention; Isis; Russia And Us Conflict; Russian Military Strategy; Syria; Turkey; Vladimir Putin, Add Tags
Add to My Group(s)
Go To Commenting
The views expressed herein are the sole responsibility of the author and do not necessarily reflect those of this website or its editors.