Ron Wyden also raises questions about the Senate's handling of the Trump-Russia investigation. 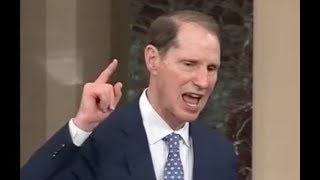 At a packed press conference on Capitol Hill on Wednesday, Sen. Richard Burr (R-N.C.), the chairman of the Senate intelligence committee, provided a progress report on his panel's investigation of the Trump-Russia scandal. Naturally, this is a touchy and dicey matter for a Republican, and Burr tried to make some points that appeared designed to limit President Donald Trump's political vulnerabilities on this front.

First, Burr declared that although Russian hackers had probed or penetrated the election systems of at least 21 states, he could confidently state that the Russian meddling in the 2016 election resulted in no changes to the vote tallies. That is, there's no reason to question Trump's Electoral College win. And second, Burr said that Russia's use of Facebook ads during the presidential campaign seemed "indiscriminate" and not designed to help a particular candidate -- meaning the recent revelations do not bolster the case that Trump was the Kremlin's choice.

But Sen. Ron Wyden, (D-Ore.), a feisty member of the intelligence committee, says both assertions are bunk. In an interview with Mother Jones on Thursday, Wyden argued that Burr's confidence in the election system was unwarranted. "The chairman said that he can say 'certifiably' that there was no vote tampering," said Wyden. "I do not agree with this judgment. I don't think it is possible to know that. There was no systematic analysis of the voting or forensic evaluations of the voting machines."

Wyden pointed out that the Department of Homeland Security has noted that its assessment that there was no finagling with the vote count was made with only "moderate confidence." For Wyden, that's not good enough for such a sensitive and significant matter -- and it sends the misguided signal that the voting system is doing just fine. Wyden believes that's the wrong message. This week he sent a letter to the major manufacturers of voting machines demanding information about how they protect themselves from cyberattacks.

David Corn is  Mother Jones ' Washington bureau chief. For more of his stories,  click here . He's also  on  Twitter  and  Facebook .  RSS  |  TWITTER  David is (more...)
Related Topic(s): 2016 Election Hack; Hackers; Kremlin; Russia Hacking; Voter Fraud, Add Tags
Add to My Group(s)
Go To Commenting
The views expressed herein are the sole responsibility of the author and do not necessarily reflect those of this website or its editors.