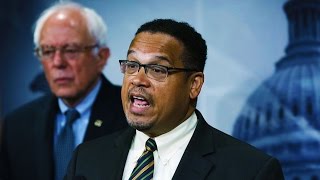 On Friday you will be making a critical decision. Your vote on the chair of the Democratic Party could very well decide the direction of our country for decades. We can continue on the path we chose in 1992, when we nominated Bill Clinton and turned control of the Democratic Party over to the Democratic Leadership Council. But the result has been a party that has lost all power and has continued to shrink.

While the percentage of Americans who are registered as Democrat is dropping, so is the membership in the Republican Party. That should tell us something. People don't want us to be more like the Republicans -- they want us to be Democrats again. The "third way" has been a disaster for our party. The focus on making the party more appealing to Southern moderates has created a party less attractive to our base.

We can use the term liberal or progressive, but it is time for our party to return to its roots. It is time for Democrats to represent the working class again. When our party, led by people like Tony Coehlo and Al From, decided to seek corporate cash and represent corporate interests, we lost our soul. We have been trying to be Republican-lite for far too long.

Bernie Sanders' campaign showed us what the independents who have been leaving our party have been looking for. The political revolution energized progressives and breathed new life into our party. We chose to stick with the failed direction of the "third way" when we nominated Hillary Clinton.

Many of us have been working hard to keep that energy and new blood in the party. Early on in the race for chair, Harry Reid, Chuck Schumer, Elizabeth Warren, and Bernie came out for Ellison. It seemed as if the party was coming together behind his candidacy. So I have to ask: why was there a need for party insiders to recruit Tom Perez to run?

Scott Galindez is a graduate of Syracuse University, a US Army veteran, and currently the Political Director of ReaderSupportedNews.org. Scott's activism began at an anti-nuclear vigil in Lafayette "Peace Park" across from the White House. Scott (more...)
Related Topic(s): Bernie Sanders; Democratic; Democrats DNC; Keith Ellison; Progressives, Add Tags
Add to My Group(s)
Go To Commenting
The views expressed herein are the sole responsibility of the author and do not necessarily reflect those of this website or its editors.