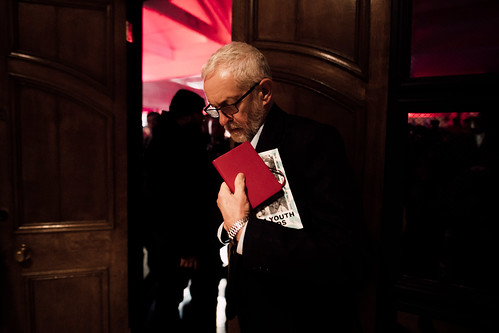 The defeat of Jeremy Corbyn's Labour Party is really a defeat for Western democracy itself. Forty plus years of neoliberal decay has exposed Western democracy for the sham that it always was. Social democracy is dead. The colonized world, now defined by many in the post-independence era as the Global South, has understood for centuries that Western democracy is akin to imperial plunder and race-based terror. Economic, ecological, and imperial decay have come home to roost in the so-called "free world." False contradictions make up the life blood of Western democracy and sustain its capitalist and imperialist core despite having nothing to offer but mythology to the masses.

To understand Corbyn's defeat, one must understand the concept of dictatorship. Dictatorship is a dirty word in the Western political lexicon and routinely used to demonize nations in the Global South for choosing their own independent path of development. But for actual socialists, dictatorship is simply an expression of class society. Western democracy is a dictatorship of the capitalist class. And over the last forty years, the dictatorship of the capitalist class has conducted a vicious assault not only on the peoples of the Global South but also on the very possibility of social democracy in the Western imperial orbit.

The dictatorship of capital is responsible for the evisceration of unions. It is responsible for the austerity and privatization measures that have enriched the capitalist class at the expense of everyone else. The dictatorship of capital has systematically lowered wages by speeding up production through automation and moving industry outside of the mother countries of imperialism. Corporate economists and media pundits discuss these developments as if they are detached from state power. The Race to the Bottom is often regarded as a rational and unavoidable outcome of an exceptional economic system. This renders the dictatorship of capital invisible and shifts blame for the growth of income and wealth inequality onto the victims of global capitalism.

Four decades of neoliberal theft and deception has produced innumerable consequences for the future of Western democracy's centuries-long façade. Perhaps the biggest is that the dictatorship of capital has deemed social democratic reform a threat to its continued existence. Elite phobia of social democracy has become more apparent as workers in the U.K., France, and the U.S. have articulated great interest in the restoration of universal social policies geared toward improving the condition of the working class. Jeremy Corbyn and Bernie Sanders have both faced vicious slander from the entire ruling class and its corporate media for making such an agenda the backbone of their political campaigns. The message from the ruling class is clear: Western democracy is incompatible with peace, social justice, and the preservation of the natural world.

Jeremy Corbyn's defeat is instructive, since it reveals the false contradictions and outright lies that the ruling class has used to misdirect the frustrations of the masses. Brexit is one of the most pervasive lies peddled by the global capitalist class and has dominated politics in the U.K. for several years. The political right has exploited popular anger toward the EU to revive imperial (i.e. racist) nostalgia and bring the U.K. even closer economically to the Empire of privatization, the United States. Corbyn's social democratic agenda was thwarted in part by his decision to walk back on his support for the 2016 Brexit referendum. However, the impact of Brexit on Labour's defeat cannot be examined in isolation. Corbyn was demonized by the Western corporate media at every turn. The anti-war social democrat found himself smeared incessantly as an anti-Semite and an asset of Russia for opposing the West's propensity for endless war and proposing that healthcare, education, and housing be regarded as human rights guaranteed to all.

Brexit is as complex of a contradiction as it is problematic. The dictatorship of capital that spearheads the European Union has rightly lost legitimacy with the masses. Former Soviet states such as Latvia and Estonia have been turned into impoverished satellites of NATO. Workers in the big imperial powers such as the U.K. and France have seen a precipitous decline in living standards as their governments become increasingly beholden to the dictates of finance capital. The EU's role in protecting the supremacy of finance capital and the Western imperial order is well known. Greece, Portugal, Spain, and other nations have seen rapid growth in their unemployment rates as a result of the EU's economic medicine.

However, Brexit has from the beginning operated as more of a conflict between contending factions of the capitalist elite. The conflict is over which direction is best for the preservation of Western democracy (i.e. Empire) amid mass frustration with the EU. The elite presented two choices to the masses: continue forward under the EU's austerity vice grip or leave the EU based on the premise that hordes of immigrants represent a threat to the purity of the old British Empire. In sum, elites have used the Brexit debacle to mask the crisis of capitalism and neutralize all dissent to its imperial pecking order.

The U.S. ruling class has wielded its own set of false contradictions and lies for very similar purposes to Brexit. Western democracy's continued rot is most starkly seen in the political crisis in Washington. The ruling class has sought to maintain social tranquility amid economic catastrophe through an assault on the consciousness of the masses. Impeachment and Russiagate are the weapons of choice. The Democratic Party, the corporate media, and the intelligence apparatus have united in opposition to Trump on the basis that he is an asset of the Kremlin. None of these parties represent a true "resistance" to the billionaire president. Rather, they form a coalition of the most deplorable elements of the imperialist state seeking to use faux opposition to Trump to escalate their war against Russia abroad and pollute the political conversation at home.

Russiagate and impeachment have been complimented by an equally dangerous lie; that of the tension between the social democratic agenda of the Sanders campaign and the interests of Black America. The truth is that Black America has historically been the most anti-war and socialist sector of the U.S. population. Black Americans generally favor unionization more than any other subgroup. The Black liberation movement, through the work of scholars such as W.E.B. Du Bois and organizations such as the Black Panther Party, has made far reaching contributions to socialist thought and practice. Socialism in the U.S. that negates race is not socialism at all. Theories on race that negate socialism only serve to reinforce the class structure of American society. The U.S. ruling class has stoked tensions between Black America and socialism by demonizing Sanders supporters as anti-Black "Bernie Bros" and elevating Black servants to the elite who have made it their mission to negate the relevance of class struggle, thereby rendering Black politics an exercise in enterprise instead of a struggle for political power.

Of course, there are many more lies and false contradictions that stem from the sordid roots of Western democracy. The sharpening contradictions presented before the masses in the U.S. and the U.K. are a byproduct of the larger crisis of imperialism. That Western democracy was always a dictatorship of capital is becoming clearer by the day. The dictatorship of capital has nothing left to offer the masses but lies; the biggest being that the West was a democratic endeavor in the first place. Neither Jeremy Corbyn nor Bernie Sanders' social democracy is tolerable to a system founded upon the brutal and murderous forms of colonialism and racialized slavery in human historya legacy that is maintained by the current neoliberal imperial order. What Labour's failed effort at a Parliamentary majority and the continued assault on Sanders show is that revolutionary change cannot be elected into power. Workers, poor people, and the "wretched of the earth" need the power that comes from their own form of dictatorship if they are to build a society and world conducive to their needs. This power will come from the struggle to establish a dictatorship of the oppressed and the downtrodden, also known as socialism.

Related Topic(s): Democracy; Jeremy Corbyn, Add Tags
Add to My Group(s)
Go To Commenting
The views expressed herein are the sole responsibility of the author and do not necessarily reflect those of this website or its editors.