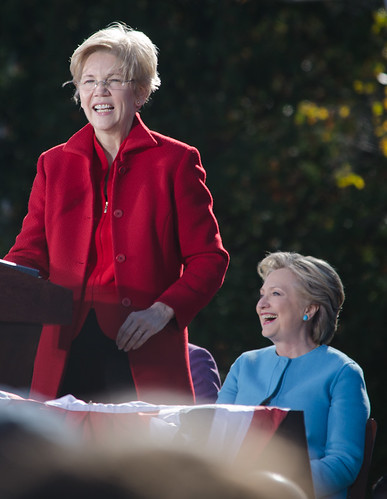 According to MSNBC pundit and Democratic Party strategist Emily Tisch Sussman, anyone who supports Sanders over Warren is "kind of showing your sexism." This remark received heavy criticism from Sanders supporters on Twitter through the viral hashtag #WomenforBernie. This kind of comment from the heir to the Tisch and Sussman Wall Street fortune is neither new nor surprising. The corporate media is staffed with pro-Democratic Party and pro-Wall Street oligarchs who fully committed to the weaponization of identity politics. For four years, Bernie Sanders has been condemned by the corporate media as an old white man and his supporters characterized as a cult of racist "Bernie Bros."

Elizabeth Warren is the just latest Democratic Party politician to benefit from the weaponization of identity politics against Bernie Sanders. Hillary Clinton promoted her identity as a woman to voters and touted the slogan "I'm with Her" on the 2016 campaign trail. It didn't matter that WikiLeaks revealed a litany of crimes on Hillary Clinton's record, including theft of the primary from Sanders and the hundreds of thousands of dollars she collected in speeches to Wall Street. It also didn't matter that Clinton admitted to holding "public and private" positions over email or that her political record is rife with favors to the rich and powerful. The weaponization of identity politics helped conjure the image that Clinton deserved political success because she was a woman, principles and politics notwithstanding.

That Warren is now the beneficiary of weaponized identity politics is nothing short of ironic. The Massachusetts Senator turned Democratic Party presidential hopeful has herself weaponized identity politics for her own gain. Warren received a received a tenured faculty position at Harvard Law School in 1993 and was labeled the first tenured "woman of color" faculty member at the institution. At the time, Harvard Law was under investigation for its discriminatory hiring practices. She further contributed to the embarrassing work of "Pow Wow Chow," which featured plagarized recipes written by white authors. Warren spent decades identifying as a Native American despite being wholesomely white. She "persisted" with her false identification as a Native American until the Native American community forced her to apologize in 2018.

Of course, pundits such as Emily Tisch Sussman are not interested in the cultural genocide that U.S. settler colonialism continues to commit against Native American communities. The condition of Native people does not win primaries or stop socialistic ideas from gaining popularity among the electorate. Elizabeth Warren's political success in the Democratic Party primary, on the other hand, has the potential to accomplish both. Despite Wall Street's concern about Warren's campaign promise to reign in financial corruption, she is by far and away the preferred candidate over Bernie Sanders should Biden and the rest of the corporate-sponsored candidates fail to gain momentum. Thus, the corporate media is more than willing to weaponize identity politics to aid Warren's campaign and thwart Bernie Sanders.

Bernie Sanders remains the most popular politician in the United States. Sanders reached one million individual donors faster than any politician in the history of U.S. presidential elections this September. And contrary to the "Bernie Bro" myth, Sanders' support base is young and diverse. Warren took corporate money in her 2018 Senate campaign and then used a leftover 10.4 million dollars to finance her presidential run. Sanders is widely supported among Black voters, women voters, and voters from lower income and lower educated backgrounds. Warren, on the other hand, possesses a very white, upper class base. The weaponization of identity politics masks these facts and helps Warren retain an illusory identity as the female counterpart to Bernie Sanders.

Calling Sanders supporters sexist because they fail to support Warren ignores the real differences between the two candidates. In my last piece, I discussed their differences in the realm of social welfare policy. Warren stumps for means-tested policies that assist the few while Sanders advocates for universal policies that bring relief to the many. But there are other differences, too. Sanders and Warren are easily distinguished by their foreign policy agendas.

Warren is a war-hawk. She voted for Trump and Congress' bloated $700 billion military budget in 2017. On the issue of Trump's negotiations with Korea, Warren criticized the current administration from the right and has supported sanctions in numerous instances, including against Venezuela. While far from an anti-imperialist, Sanders has consistently voted against increases in the U.S.' military budgets and has supported the Trump Administration in its negotiations with Korea. The key difference between Warren and Sanders' foreign policy is that Warren wants to maintain U.S. hegemony and undying support for Israel abroad while Sanders wants to scale back the war machine to fund the needs of workers in the United States.

Warren is the beneficiary of a weaponized brand of identity politics that seeks to erase the very real differences between her and Sanders. Weaponized identity politics reward "strong" women so long as they are loyal capitalists such as Warren and Clinton. Women who critique U.S. foreign policy such as Tulsi Gabbard or Cynthia McKinney are vilified and demonized to the point of exclusion from the U.S. political system. Female journalists who expose U.S. war crimes such as Anya Parampil, Abby Martin, and Margaret Kimberly are systematically excluded from the corporate media to make room for wealthy Wall Street elites such as Emily Tisch Sussman. Weaponized identity politics elevate servants of corporate power who meet the profile of an oppressed group while systematically marginalizing women and other oppressed peoples who dare speak for the impoverished majority.

Warren says she is a capitalist "to my bones" while Sanders is a democratic socialist. Both seek to reform the neoliberal capitalist order but take dramatically different approaches. Warren's appeal stems from her ability to co-opt Sanders' program and make it palatable to the corporate-owned DNC and its wealthy voting base. The DNC and the corporate media have used Warren to drive a wedge in the social democratic yearnings of the Democratic Party's younger, working class voting base. Weaponized identity politics are a clear sign that the Democratic Party would rather elevate white liberal racists and capitalists such as Warren over Bernie Sanders. The ruling class hopes Warren represents a "compromise candidate" that can dampen popular expectations and stabilize the waning legitimacy of the Democratic Party establishment. The only antidote to the dead-end politics of the election cycle is a mass exodus from the Democratic Party accompanied by a grassroots movement that can theorize and organize a new form of governance around a peoples' agenda of peace and socialist democracy.