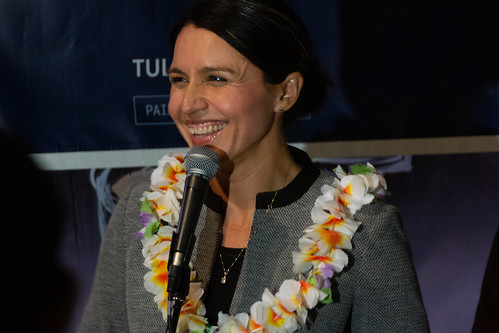 Hawaiian Congresswoman and Democratic Party presidential candidate Tulsi Gabbard will not be speaking at the third Democratic primary debate in Texas on September 13th. According to the DNC's arbitrary rules, Gabbard failed to meet the two percent threshold in the number of polls required to qualify (4). She did, however, surpass the individual contribution requirement by over thirty thousand donors and received two percent or more of the vote in several "non-qualifying" polls, including from reputable sources such as The Boston Globe and The Economist. In other words, the debate process was rigged against Gabbard. Her exclusion from the debate stage only offers further proof that the United States is a nation free of democracy.

There have been no explanations coming from the DNC as to why the rules exist as they do in the first place. No democratic process is involved in deciding what qualifies as a "certified poll" and what doesn't. The DNC was pressured in the aftermath of the 2016 election to make reforms after it was exposed for its role in systematically cheating Bernie Sanders from any chance at the nomination. Clinton conduit Debbie Wasserman Shultz stepped down as DNC chair and the corporate Super Delegates who decide the nomination process were stripped of their ability to pledge their support for candidates months before the voting process began for delegates and voters. However, the super Delegates were neither removed completely from power nor was the DNC made any more democratic. Reforms to the DNC also included new loyalty oaths to the party and an open door for Super Delegates to vote in a contested convention.

The reason for Gabbard's exclusion from the debate is multifaceted yet simple. It is clear from the DNC's refusal to debate the issue of climate change that the Wall Street-owned party does not want to discuss war and foreign policy, either. The first two Democratic Party debates saw a total of nineteen minutes spent on foreign policy questions. Foreign policy makes up the majority of Gabbard's presidential campaign. Even though her political record is slightly more hawkish than Bernie Sanders, Gabbard spends far more time placing an end to U.S. regime change wars on the top of the political agenda. For this, Gabbard has been labeled a "dupe" of Russia and attacked at every turn by the Democratic Party establishment.

The exclusion of Gabbard from the third debate is another indicator that the United States' electoral process is hardly democratic. If the U.S. were a democracy, decisions about debates would not be determined by the whims of a largely anonymous DNC led by corporate-friendly political figures such as Tom Perez. A democratic election process would consider the needs and interests of the general population. That means climate change, which is a primary concern for Democratic Party voters, would be debated and discussed. It also means that the candidate who was most searched during both debates, Tulsi Gabbard, would be allowed to debate for a third time in front of a national audience.

Jeff Bezos' Washington Post touts the slogan "democracy dies in darkness" to brand its media product. Yet neither the Washington Post nor the entire corporate media has any trouble collaborating in the destruction of any semblance of democratic process in the United States. The corporate media is completely averse to asking questions of the powerful political elites in the DNC who shower them with insider privileges. Tulsi Gabbard was ousted from this club after she denounced the DNC in 2016 for its anti-Sanders campaign and decided to run a presidential campaign centered on a critique of U.S. foreign policy. Democracy in the United States is only reserved for opinions, individuals, and groups who do the bidding of the corporate interests that control official Washington.

It is public knowledge that so-called "democracy" in the U.S. exists only for the rich. Reputable research and even former president Jimmy Carter have called the U.S. an oligarchy, not a democracy. Campaign finance reform is a wildly popular policy which has gone nowhere because of the intransigence of the capitalist oligarchs who rule over the state. Lobbying, whether in the form of corporate kickbacks or Israeli pressure, is the norm within Congress and the presidential election cycle. Corporate oligarchs have designed a system that creates the illusion of representation while ensuring that the electoral process is dictated by the wealthy.

The U.S.' sham democracy is a bipartisan project. Twelve of the twenty Democratic Party candidates running in the primary have received donations from at least three billionaires. Corporate favorites Joe Biden, Kamala Harris, Pete Buttigieg, and Cory Booker have seventy-one billionaire donors between them. So-called progressive Elizabeth Warren has declared that should she win the nomination, she too would embrace the patronage of wealthy donors to avoid what she called "unilateral disarmament." Warren's statement is an admission that U.S. democracy as it is currently constituted is defined by a struggle to win the support of billionaires and oligarchs, not the people.

The consequences of a capitalist-controlled democracy are devastating for those excluded from the U.S. electoral process. Tens of millions of workers are without healthcare and half a million workers file for bankruptcy each year due to healthcare expenses. Half of the United States' population is considered "near poor" and without enough savings to cover a $500 emergency. Black Americans, who find no true representation from the Democratic Party and have their votes suppressed by Republican states and districts, have been economically and politically devastated by the white supremacist underpinnings of the rule of the rich. Unemployment for Black American men is nearly 21 percent and the median net worth of the Black American family is $1700. Economic misery is buttressed by a mass incarceration regime that warehouses nearly a million Black Americans behind bars, or over forty percent of the two million prisoners in the United States.

Thanks to the political campaign of Bernie Sanders and grassroots movements such as the Black Lives Matter movement and Occupy Wall Street, these issues have been forced into the narrow space of the electoral arena in the United States. However, the oligarchs who control the U.S. political process have been waging a war to silence any discussion about policies that would improve the lives of workers and oppressed people suffering from the maladies of corporatea rule. The Democratic Party establishment has used Russia, its corporate control over the DNC, and the corporate media to ensure that policies such as Medicare for All or reparations for Black Americans are either discredited or amended to serve the interests of the elites. Tulsi Gabbard's exclusion from the debate indicates that discussion over U.S. foreign policy is prohibited in the electoral arena, especially in the Democratic Party. Thus, Gabbard's predicament is much bigger than her individual campaign or her political contradictions.

There is a dangerous trend developing among the various political factions of what calls itself the "left" in the United States. The trend is characterized by a series of "purity" litmus tests that reinforce individualist and colonialist attitudes and behaviors. Those who defend Gabbard's right to speak at the debates are labeled apologists for her support of Indian Prime Minister Modi or her declaration that she is a "hawk on terrorism." According to CodePink, Tulsi Gabbard's record is contradictory on questions of war and peace. While these aspects of Gabbard are important to understand, it is equally if not more important to understand the fundamental relationships of power that direct U.S. domestic and foreign policy. The entire Democratic Party establishment, including the military industrial complex, is arrayed against Gabbard. It is on this basis that we must defend Gabbard's right to bring much needed conversation about the dangers of U.S. foreign policy into the electoral arena. Our principle job is to organize a mass movement for a working class democracy that serves the interests of the many, not assist in the DNC's efforts to suppress Gabbard's voice.

Related Topic(s): Tulsi Gabbard, Add Tags
Add to My Group(s)
Go To Commenting
The views expressed herein are the sole responsibility of the author and do not necessarily reflect those of this website or its editors.